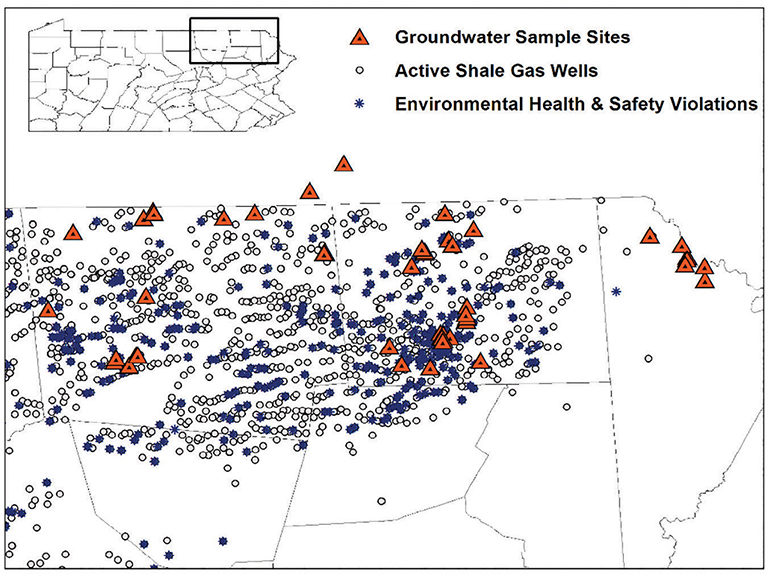 Image courtesy of Yale University.
Residential wellsites from one of the most active areas of the Marcellus Shale in northeastern Pennsylvania were tested to determine likely sources of groundwater contamination.

Researchers at Yale University who analyzed groundwater wells in the Marcellus Shale area have determined that hydraulic fracturing is highly unlikely to be a direct source of contamination.

The 3-year study, published in the Proceedings of the National Academy of Sciences, also found that well casing failures and produced water containment ponds did not impact the groundwater samples taken during the study. The researchers concluded that the samples that tested positive for some of the same organic chemical compounds used in drilling and completion operations, but not in dangerous concentrations, resulted from accidental spills on the surface.

“We found that there was a significant relationship between the levels of diesel-range organic compounds and the location to a shale gas well in the study area,” said Brian Drollette, the study’s lead researcher and a PhD student at Yale. “Furthermore, we saw that this relationship also existed between the concentration and the distance to the nearest gas well that had an environmental and health safety violation.”

From 2012 through 2014, Drollette took samples from 64 residential water wells spread across about 7400 km2 in northeastern Pennsylvania, making it the most extensive study of its kind to date. Unlike earlier studies that have focused exclusively on methane migration into groundwater, the Yale-led effort also analyzed water samples for a subset of heavier chemicals that represent about 10% of those disclosed through public databases such as FracFocus.

The samples with the highest concentration of organic compounds were taken from water wells less than 300 ft deep. Additionally, two of the positive samples contained a known hydraulic fracturing additive, which Drollette said supports the likelihood that chemicals released onto the surface will potentially leach into groundwater sources.

For the organic compounds addressed by US federal safe drinking water standards, the study found that the concentrations were well below those the laws allow and could be easily removed with inexpensive and widely available carbon filters. For those chemicals where no stan­dards exist, specifically the diesel-range organic compounds, the researchers said their concentrations were also very low.

The researchers analyzed the samples using techniques such as noble gas analysis and inorganic fingerprinting that allowed them to dismiss other potential sources of contamination.

While many of the study’s key findings are in line with the shale industry’s claims that hydraulic fracturing poses minimal risk to groundwater, the researchers cautioned against extrapolating the findings beyond the sample region.

Desiree Plata, an assistant professor of chemical and environmental engineering at Yale and a coauthor of the study, explained that while the unrestricted flow from the Marcellus Shale layer to aquifer layers is not supported by this study’s findings, there may be regions where unique geology would allow for such a phenomenon.

“I think that’s encouraging from an industry perspective because it means you do have some separation between those horizons,” she said. “But the truth is that if you’re essentially engineering the subsurface, you could create a preferential flow path that results in enhanced communication with deep shale horizons or fluids and the shallow groundwater.”

Nevertheless, Plata said the study should be a signal to the shale industry that it needs to pay closer attention to its aboveground activities and strengthen controls regarding spills to address concerns over groundwater contamination.

“What happens at the surface is really important and actually much more controllable, so you should take advantage of the opportunities to try and prevent those releases,” she said. “When they do happen, respond to them really quickly or inform the people living in the area so that they can take control of their own water sources and treat for these materials.”