Statistics Point to Water Injection as Cause of Earthquakes, But Understanding Why Remains a Geological Puzzle 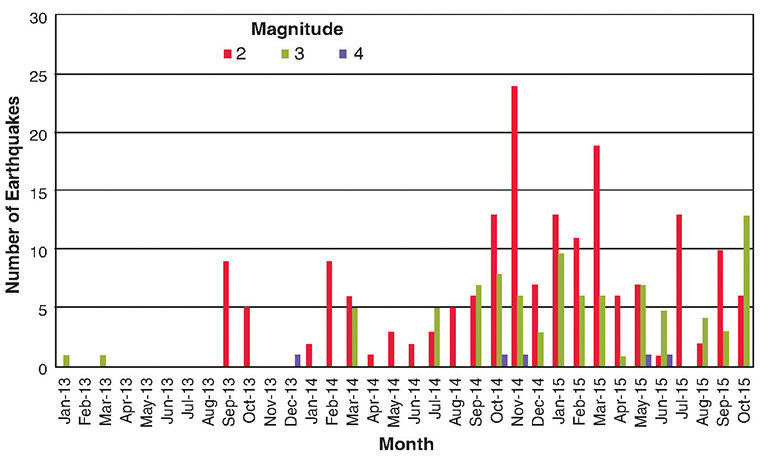 Graphic courtesy of the Kansas Geologic Survey.
A dramatic rise is shown in the number of seismic events that peaked between late last year and early this year in Kansas.

A surge in earthquakes tightly clustered in southern Kansas that followed the large increase in produced water injections prompted the state to cut the daily limits on disposal wells in that area to see if that will help solve the problem.

Based on 3 months of reduced injections through mid-September, “the results were encouraging,” said Shelby Peterie, a research geophysicist at the Kansas Geological Survey. Her presentation at the Society of Exploration Geophysicists’ annual meeting in New Orleans in October showed there has been a reduction in the intensity of the earthquakes reported, but not the number of them.

The limits imposed by Kansas regulators were extended another 6 months in September to see if the earthquakes, which climbed only after a couple years of increased water disposal beginning around 2011, will go down gradually over time.

The rate of earthquakes per year in Kansas of magnitude 3 or more, which is the level at which they are easily observed, has jumped to about 50 per year in 2014 and 2015, up from less than one every 2 years, she said.

This represented a jarring change in the status quo in a state in the center of the country located far from the earthquake-prone parts of the country.

As for the cause of the large increase in incidence, Peterie said, “It is likely that not all of these are naturally caused.” The cautious comment reflects a politically charged issue, where the statistical link appears clear. The rise in seismic activity has been concentrated in a small area in south-central Kansas where there was also a sharp increase in saltwater disposal.

The added volume of injections deep into the subsurface “may lower the frictional resistance between rocks along an existing fault system and, under certain circumstances, allow a fault to move,” said Rex Buchanan, interim director of the Kansas Geological Survey, in a testimony on 26 January.

An advisory from the survey in August about the potential for triggered earthquakes added, “Linking a specific earthquake to a specific human activity, such as wastewater disposal in a single well, is difficult.”

The rise in earthquakes has been concentrated in two counties that historically were not prone to earthquakes. Five areas within those counties were mapped based on the rise in earthquake activity. Within that cluster, increased oil and gas exploration and production activity had pushed injection per disposal well from an average of 8,000 B/D to 20,000 B/D–40,000 B/D, and even higher. “There was a 700% increase in saltwater disposal and a corresponding rise in the earthquake rate,” Peterie said.

In June, the injection rates within the cluster were reduced to the levels before the rise in unconventional exploration, to an average maximum of about 8,000 B/D. The program limits injections into the deep Arbuckle aquifer. In addition, the drastic drop in oilfield activity due to continued low oil and gas prices is also likely to be reducing the amount of water produced and requiring injection disposal.

Oil industry groups have questioned whether there is geological evidence linking the phenomenon, and based on papers at the conference, the fact that increased water and earthquakes appear linked in some areas and not in others is not well understood.

An article in Science (19 June 2015) by F. Rall Walsh III and Mark Zoback reported that in Oklahoma, induced seismic activity may be the product of multiple disposal wells injecting fluids that affect a broad area. Peterie mentioned the study about conditions in Oklahoma and oil and gas operations extending north to the part of Kansas seeing a rise in earthquakes.

Seismic activity began after several years of increased injections related to unconventional oil and gas exploration and production in those two counties. She cautioned that these are early results, and it is too soon to judge the program’s effectiveness.

Another presentation at the session addressed the difficult challenge of predicting when injection may cause increased activity, and when it will not.

“The vast majority of the wells are injecting a lot of fluid and not seeing more earthquakes or any at all,” said James Verdon, a postdoctoral fellow at the University of Bristol.

The study considered a statistical analysis approach and also a geological approach, and the results from both appeared to work when history-matched in the fields studied.

But petroleum engineers insisting on proof in the ground need to consider the effort it took to categorize the geological features in the Salah field in Libya, the results of which were used to predict induced seismic activity.

“This was a huge amount of work,” he said. The analysis included modeling the stress and pressure within 300,000 fractures in the Salah field. “This may not be commercially feasible for every project.”

Statistics Point to Water Injection as Cause of Earthquakes, But Understanding Why Remains a Geological Puzzle