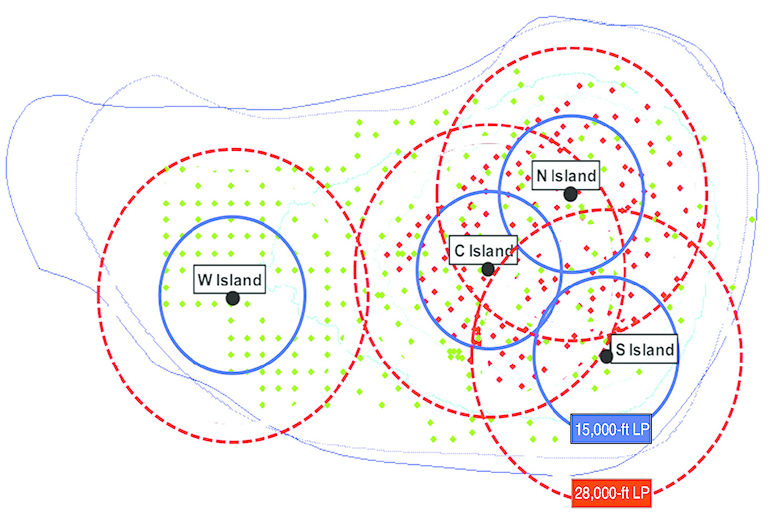 As part of a project that involves the use of four artificial islands to drill and complete more than 300 extended-reach-drilling (ERD) wells in a giant offshore oil field, several completion designs have been piloted for brownfield development. One well design incorporated the use of inflow-control devices (ICDs) and swell packers, which was the operator’s first use of such technology in a production well. The technology was installed in the pilot well to test inflow control and to manage future water production.

The giant 1200-km2 offshore oil field is located 84 km northwest off Abu Dhabi Island and consists of a layered carbonate formation that was discovered in 1963. It has still only produced a small percentage of original oil in place, with water cut (WC) less than 15%. There have been almost 500 wells drilled in the field since field discovery. Development was based on pattern producer/injector wells, with each well using a dry tree on a wellhead platform tower.

To achieve the strategic goal of increasing the production rate by approximately 40% and maintaining a plateau for up to 25 years, a brownfield development plan (UZ-750) has been generated that will use four artificial islands (Fig. 1 above) with large 3,000-hp land drilling rigs. The aforementioned island arrangement will allow the drilling of approximately 360 wells that will use ERD to drill horizontal laterals approximately 10,000 ft in length at measured depths up to 35,000 ft. The brownfield development plan calls for a parallel line drive for producer/injector-well pairs, to provide optimum sweep of the reservoir.

This paper compares the performance of three mature-field horizontal infill wells, one of which is completed with autonomous inflow-control devices (AICDs).