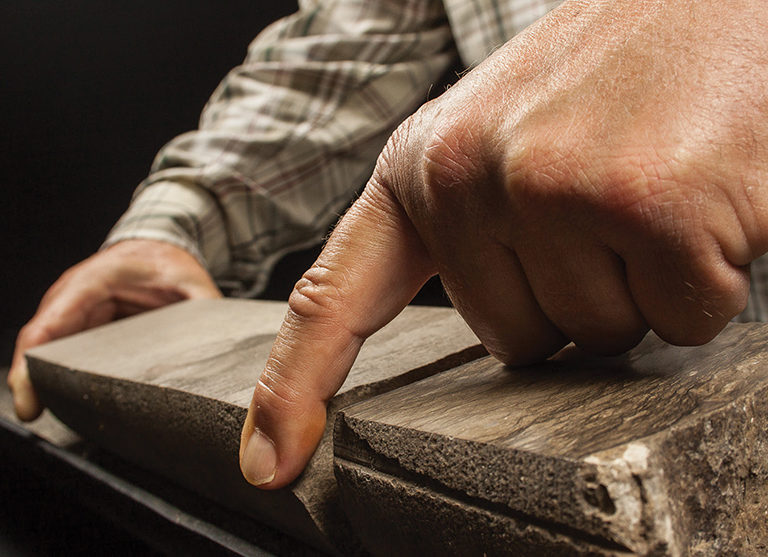 Photo courtesy of PetroArc International.
With a little polishing and high-resolution scanning technology, core sample imagery provides production companies with the ability to learn more about their reservoirs and preserve their samples digitally.

In the search for oil and gas, one of the first investments that companies make is in the analysis of core samples. Pulled directly from the reservoir rock, core samples provide critical data used to determine how an exploration program should move forward, or if at all.

However, compared with the high-tech methods found in so many other arenas of the oil and gas industry, the conventional methods used to examine core samples seem quite antiquated.

Petroleum geologists are usually given the first look at the samples to measure key rock features such as natural fractures and to estimate the size of the rock grains. And among the tools most often used to make these measurements and provide a detailed description of the core are a magnifying hand lens, a ruler, and a pad of paper.

As tried and true as these analog technologies have proven to be for much of the industry’s history, there is an ongoing transition to bring the process of core description into the digital age.

Founded in 2005, PetroArc International is one of the companies working on this front. Specializing in high-resolution imagery and image analysis for the oil and gas industry, as well as academia and the medical community, the company uses in-house developed scanners that can be shipped to a core layout room or a field site anywhere in the world.

Once collected, the images of hundreds or thousands of feet of core can be loaded onto a thumb drive along with the company’s analysis software. Unlike standard core imagery, done at 300 dpi, PetroArc’s cameras scan the core at resolutions of 1,360 dpi to 11,000 dpi.

The software acts as a microscope that allows the user to magnify the core up to 40x and make measurements of minute details including grain bed thickness, grain size, and estimates of permeability.

Christopher Prince, president of PetroArc, said that because core samples are so valuable to exploration companies, they do not hesitate to send their best petroleum geologists half way around the globe to examine them if the need arises. However, he argued that while first impressions are important, it may be just as important for the experts to bring home a digital record.

“One thing that I have learned is that when people spend a lot of time and money getting a core, they are going to want to go see it and touch it. But, then I’d also like to be able to take my time and get a good close look at it sitting at my desk,” he said. “And if there are more people (in the company) that have access to that information, there are more ideas and insights that are going to come out of it.”

Those who use this technology can safely bet that new tools will be developed to derive more value from the cores. For instance, in the next year, PetroArc plans to release a software update that will allow the calculation of a core’s net pay—something that cannot be done with a hand lens and a ruler.

An ongoing project between PetroArc and the University of North ­Dakota (UND) to create a virtual core library shows the technology’s extensive potential. For the past 2 years, the company has collected high-resolution core ­images from the state’s most prolific producing formations, including the Bakken and Three Forks Shales.

So far, more than 8,000 ft of core from across North Dakota have been scanned and recorded. To put that into perspective, if those samples were stacked vertically, they would reach the deepest part of the Grand Canyon and extend another 2,000 ft into the sky above it.

Joseph Hartman, a professor and graduate faculty member in the Harold Hamm School of Geology and Geological Engineering at UND, has been leading the charge to build the virtual core laboratory using PetroArc’s technology.

“I am very greedy about the quality of images I want to look at,” he said. “Having the imagery on my computer at high-megabyte capacity to examine, play with, and analyze gives me a certain flexibility that I don’t necessarily have by just looking at the core sample.”

Hartman added that previous endeavors to image the cores in the core library at UND have relied on standard photography but even the “good photographs” offered limited learnings. “With high-resolution images, you can actually look at the fabric in a meaningful way, which I think is pretty cool,” he said.

Eventually, it is hoped that the virtual core library will not only be available to UND students and visitors, but also to the whole world once the data is hosted online. Extending the accessibility through the Internet is also expected to help alleviate the backlogs of people waiting to inspect the most sought-after cores.

The UND project is also an example of how PetroArc’s digital scanning process can bring new life to old cores. Before a sample is scanned, the surface is first polished to near gem-quality to reveal its fine-scale features.

Prince added that whether they have been sitting on a shelf since the 1970s or are fresh out of the well, polishing the cores is an essential step to remove damage caused by the ravages of time and the sawblades that cut them in half. “The way we process the core, you can actually measure the grain size,” he said. “Without us polishing the cores, you wouldn’t even be able to see them.”

By digitally archiving fresh cores, their original conditions can be preserved for as long as a company needs them. This is especially important since cores can degrade quickly and the storage conditions for many repositories, including all the large ones in Texas, are not ­climate-controlled, Prince said.

This can lead to the growth of salt crystals on the surface of the core within hours. Where cores are refrigerated, Prince said different types of rock can transform and shale layers will shrink and fragment into “poker chips” in only a couple of months.