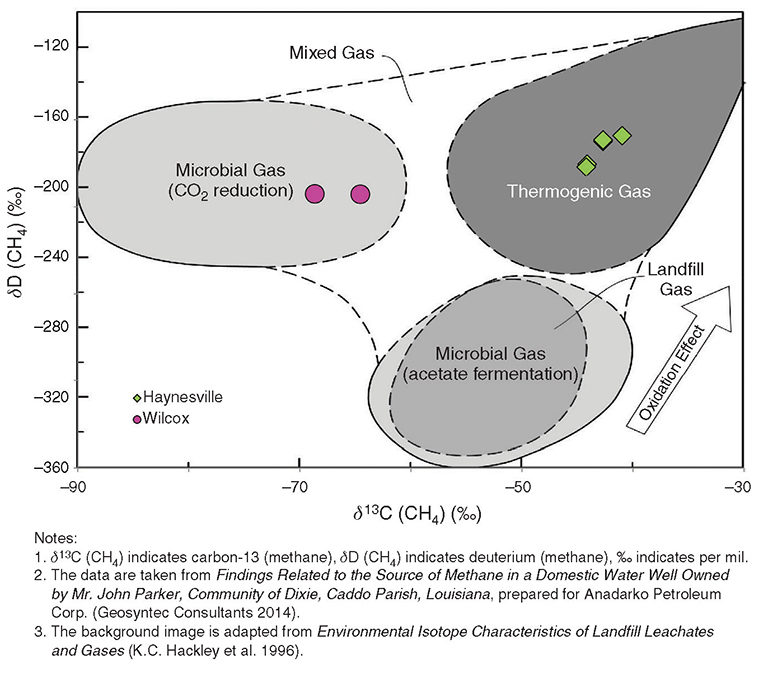 Editor’s note: Professionals in the oil and gas industry often receive questions about how industry operations affect public health, the environment, and the communities in which they operate. Of particular concern today is the impact of hydraulic fracturing on the environment. In this column, JPT invites energy experts to put those questions and concerns about industry operations into perspective. Additional information about the oil and gas industry, how it affects society, and how to explain industry operations and practices to the general public is available on SPE’s Energy4me website at www.energy4me.org.

In my recent article in the July issue of JPT, I explained how the composition of natural gas establishes a basis for differentiating between thermogenic and biogenic gases. Recall that thermogenic gases are formed from the heating of organic matter in high-temperature subsurface environments. Gases that form under these conditions are typically composed of hydrocarbons ranging from one to six carbon atoms, or methane (C1) to hexane (C6).

Biogenic gases form in lower temperature regimes, usually in the near subsurface, as a result of microbial activity on buried organic matter. These gases, which are dominantly methane with very minor ethane (C2) and propane (C3), are commonly associated with coalbeds, swamps, and landfills.

We can differentiate between thermogenic and biogenic gases by considering the molar ratio of methane to ethane and other hydrocarbons (C1/(C2+C3). As noted in my previous article, it is not uncommon for that ratio to be less than 100 among thermogenic gases and to be greater (oftentimes, much greater) than 1,000 among biogenic gases. The difference in ratios is a function of the deficiency of ethane (C2), propane (C3), and higher-chain hydrocarbons in biogenic gases.

In addition to the molar ratios, geochemistry offers a deeper look into the signatures of natural gases by mass spectrometry. This gives geochemists a powerful means of differentiating between thermogenic and biogenic gases. Specialized laboratories have the equipment needed to conduct such analyses on samples of dissolved gas in water and samples of gas collected from production wells. Such analyses focus on specific carbon and hydrogen components of the methane (C1) fraction.

More specifically, laboratories measure the abundances of an isotope of carbon (carbon-13 or 13C) and an isotope of hydrogen (deuterium, 2H or D) in methane, relative to their abundances in standards determined by the International Atomic Energy Agency. For 13C, the standard is known as Vienna Pee Dee Belemnite (VPDB) and for D, the standard is Vienna Standard Mean Ocean Water (VSMOW).

All of the Haynesville gas samples lie near the center of the thermogenic gas field and the two samples of dissolved gas from the Wilcox aquifer are within the field associated with coalbeds. This separation between the Haynesville and Wilcox gas samples is unmistakable and establishes a second and very sound geochemical basis for differentiating between thermogenic and biogenic gas. Geochemists look for separations such as this when trying to identify the conditions under which a gas originated.

We can take this a step further by plotting δ13C against C1/(C2+C3), as shown by Fig. 2 (also known as a Bernard plot). In this figure, the Haynesville samples lie with the thermogenic field, in the lower right. The C1/(C2+C3) ratios are all less than 100 and the associated δ13C values range from approximately –45‰ to –40‰. The two Wilcox gas samples are located within an area of the Bernard plot dominated by microbial activity. For these samples, C1/(C2+C3) is close to 10,000 and δ13C is –68‰ to –64‰. The separation between the Haynesville and Wilcox gases is so distinct on this plot, both with respect to δ13C and C1/(C2+C3), that there can be no reasonable basis for arguing that there is any influence of thermogenic gas in shallow groundwater.

I have looked at many analyses of dissolved gas in shallow groundwater in Louisiana, and I have seldom seen stable isotope signatures or gas ratios that indicate pure thermogenic gas or mixing with thermogenic gas.

In this brief presentation and the previous article, we have examined some very basic concepts that offer a penetrating insight into the origin of natural gas discharging from shallow ground­water. The concepts and associated plotting methods that I have illustrated are well established and widely used. It is especially important to consider the overall composition of gas and the isotopic signatures of gas discharging from domestic wells before concluding that oil and gas operations are to blame.

I welcome questions or comments about any of this material. Contact me at bdarling@geosyntec.com.

Bruce K. Darling is a senior consultant at Geosyntec Consultants. He has worked for 33 years as a geologist in the energy and environmental industries. As a consultant, he has represented clients in the petroleum, mining, electric power, and radioactive waste disposal industries. He has also directed field programs in Kenya for nonprofit organizations involved in the development of water resources in eastern Africa. Much of his petroleum-related consulting work is in support of producers faced with litigation over allegations of soil and groundwater contamination associated with leases in Texas and Louisiana. He works from offices in Austin, Texas, and Lafayette, Louisiana. Darling holds an MS in geology from the University of Louisiana at Lafayette and a PhD in hydrogeology/geochemistry from the University of Texas at Austin.