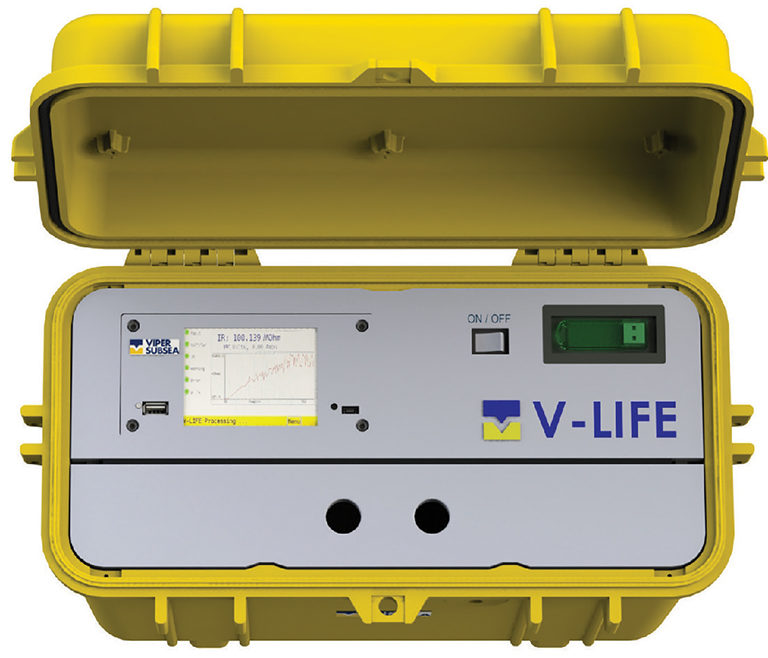 Photo courtesy of Viper Subsea.
The V-Life device from Viper Subsea sends out an electrical signal over a power line that the company says can stop power losses caused when breaks in the insulation of subsea electric lines allow in seawater. It also monitors the efficiency of electrical service.

As subsea electric lines age, they are prone to cracks that allow seawater in, reducing their effectiveness, and if the leaks are bad enough, they can shut down operations.

A British subsea engineering and equipment company is selling a novel repair option that can be installed without ever going into the water.

Viper Subsea’s solution comes in the form of a box sending out specially programmed electrical signals. It has installed units on 17 umbilicals and subsea cables and it worked in all but two cases, said Max Nodder, business development director and cofounder of Viper, during a presentation at SPE Offshore Europe.

For anyone whose mental image of insulation is a hard plastic shell isolating wires from the elements, Viper’s method may seem farfetched. But the conventional alternative is not easy to accept either, given the time and money required to replace subsea lines that can run for miles.

An unnamed customer on Viper’s website said the device allowed the com­pany to avoid spending USD 14 million for a replacement part, not to mention the lead time needed to get a replacement made, or the potential production lost during an outage.

Finding and sealing openings that cause such “electrical leaks” is typically not an option because the source of the problem cannot be located. Viper is developing a second device in a joint industry project (JIP) with four major oil companies to narrow down the source of trouble.

“The breaks in insulation are often at an unknown location,” Nodder said, adding that with the company’s device called V-Life, “the effect finds the point of failure and helps you there.”

When it comes to describing the “effect,” details are limited. The device, which is sold as a service, is connected to the production control system like a power monitor. The work is done by a company technician and normally takes less than an 8-hour shift.

The device sends out a low-­powered signal combining AC and DC currents based on the company’s proprietary program, which draws on elements in the water to re-create resistance. It also monitors the performance along the line, which allows users to know if it is effective.

In case studies, Viper reported that within weeks, the treatment produces significant increases in resistance between the line and the water. In one example, the system was used to restore a line that had been dead for 2 years, Nodder said. Customers have used the device to delay or avoid replacing subsea lines.

A video on Viper’s website states that it uses a polarization signal to create electrokinetic and electrochemical effects, which suggests the V-Life device attracts certain elements in the seawater and causes a chemical change to establish a nonconducting layer. In a presentation at the conference, the company said the protection lasts only as long as the leased device is sending its signal.

Viper predicts the protection can last more than 25 years, but the longest installation has been going for 3 years, ­Nodder said.

But he said, “There are occasions when V-Life is not the solution.” There are electrical shorts that exceed its powers. It is difficult to know in advance which cases cannot be treated because he said “rarely do you find a smoking gun when it does not work.”

In most cases, offshore operators cannot locate problem spots. Viper is working on developing a device to help locate the source of problems with the JIP supported by BP, Chevron, Shell, and Total. The device, called V-SLIM, will be installed at intervals along subsea lines and umbilicals and it can tell if water is getting into the line upstream or downstream from that spot.

Knowing the location could reduce the cost of repairs by allowing users to replace specific line segments rather than an entire line. Field testing is expected to begin in November.