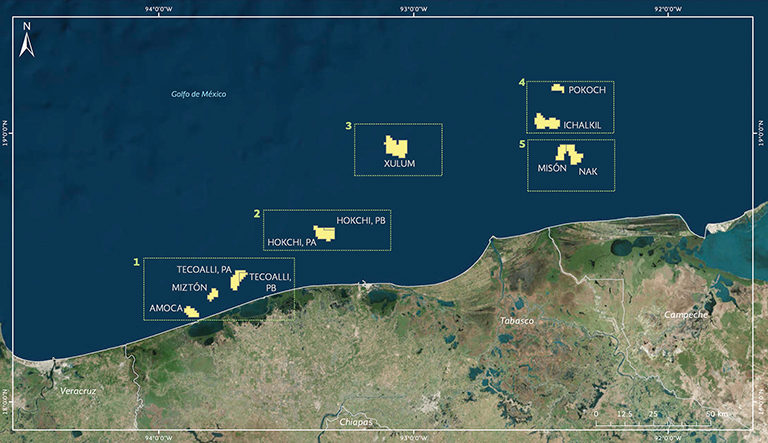 Image courtesy of National Hydrocarbons Commission of Mexico.
After a disappointing opening auction in July, Mexico’s government is pleased with the results of its second attempt in which three blocks in the Southeast Basin were awarded. Two other blocks failed to attracted bids.

Mexico’s second oil and gas lease auction has been deemed a success after three out of five shallow-water blocks were awarded in September. The awarded areas contain an estimated 236 million bbl of oil and 190 Bcf of gas. The government expects the auction to result in a USD 3 billion investment and up to 90,000 B/D in production by the start of the next decade.

The auction’s outcome was warmly welcomed by Mexico’s National Hydrocarbons Commission, known by its Spanish-language acronym CNH, which has been working for more than a year to organize the historic opening of the country’s exploration and production sector.

“We believe that our mandate of obtaining the best conditions for the Mexican state was achieved,” said Edgar Rangel-German, a CNH commissioner. “It is important to mention that ­neither the current oil prices nor the minimum values established by the minister of finance mattered in this second auction. It seems to me, that materiality ruled the  tender.”

Ivan Cima, head of Latin America upstream oil and gas research at Wood Mackenzie, said the auction was undoubtedly a success. “It forced the view that the appetite in the industry for quality acreage offered under competitive fiscal terms is there, despite the low oil price environment,” he said.

Cima also said the auction results should be viewed within the context that all the areas offered were discovered resource opportunities. Their derisked nature offered an upside that the pure exploration plays offered in July’s auction did not, he said.

In the first auction, only two of 14 exploration blocks were awarded, significantly fewer than the government’s own modest predictions. Nine companies submitted bids in the September auction compared with seven in the July auction.

Industry experts cited several reasons for the dismal results of the first auction, including setting the profit sharing requirements too high to attract competitive bids. In response to the poor showing, the Mexican government made changes to key bidding terms and released the minimum profit sharing thresholds a week before the second auction. In July, the profit sharing minimums were kept secret until the bids for each block were unsealed.

The next auction for 26 onshore discovered resource areas will be held in December. The remaining auctions of Round One will include deepwater and unconventional blocks and are expected to be scheduled for some time next year. While only five blocks have been awarded so far, more than 750 blocks are eventually slated to be auctioned to foreign and domestic oil and gas companies over the next few years in subsequent rounds.

The blocks in the second auction are located in an offshore area known as the Southeast Basin in the southern rim of the Gulf of Mexico. The awarded blocks are as follows:

Eni won rights to Block 1, the largest on offer in terms of both area and potential reserves. The company’s high bid offers 83% of the pretax profits to the Mexican government and promises a 33% increase above the minimum local work program requirements. The average depth is 108 ft and it covers about 41 sq miles. It has three fields, Amoca, Miztón, and Tecoalli, which hold probable reserves of 107 million bbl of light oil and 69 Bcf of gas.

Pan American Energy and E&P Hidrocarburos and Servicios won Block 2 with a bid that sends 70% of the pretax profits to the government. The consortium also committed to using 100% local content. The average depth of the block is about 92 ft and it covers about 25 sq miles. Its only field, Hokchi, holds 61 million bbl of light oil and 29 Bcf of gas.

Fieldwood Energy and Petrobal were awarded rights to Block 4 with a lone bid that grants 74% of the pretax profit to the government but without any increases to the minimum local work program requirements. The average water depth of the block is 147 ft and it covers 36 sq mi. It has two fields, Ichalkil and Pokoch, which are estimated to hold 68 million bbl of light oil and 92 Bcf of gas.

For the development of the Dvalin high-pressure/high-temperature (HP/HT) gas field in the Norwegian Sea, a completion scheme using standalone screens is planned.