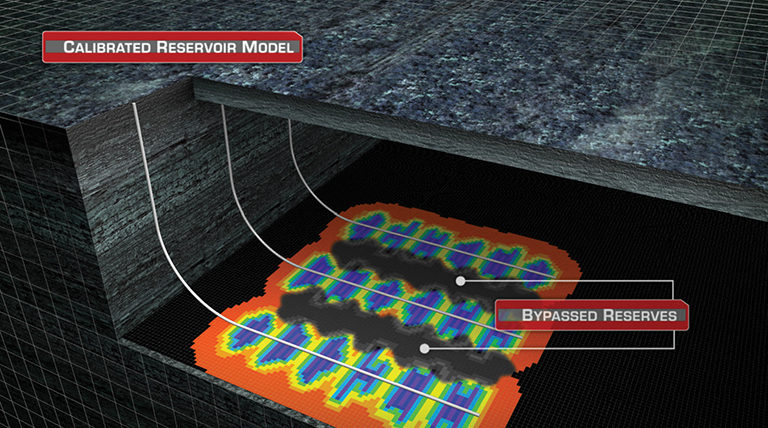 Image courtesy of Halliburton
Whether the latest and the greatest completion technologies were used or not, Halliburton is making the case that shale producers are leaving behind reserves that may only be tapped through refracturing.

Although refracturing is a topic that has gained a lot of interest, many shale producers have been sitting on the sidelines because early results did not justify the spending. Halliburton has now joined other service companies in announcing that its results prove the technology is ready for prime time.

The company’s encouraging numbers show that on average, it is seeing ultimate recovery increases of 80% and a two-thirds reduction in the cost per incremental barrel of oil from a refractured well compared with each barrel from a new well.

Priyesh Ranjan, a senior manager of global business development at Halliburton, presented the details of the company’s new Activate Refracturing Service in September. Speaking before an audience of oil and gas company representatives in Houston, Ranjan tried to dispel the notion that the majority of refracturing candidates are primarily vintage wells because of the improvements made in completion technologies and fracture designs in recent years, “Irrespective if a completion is new or old, it has bypassed reserves left behind,” he said, adding that “Halliburton feels extremely confident that if a lateral is landed in good reservoir quality, it most probably has a potential for a second life.”

The service company’s case for the extensive need of refracturing is based on well data that it collected from every major play in North America. The numbers reveal that despite their best efforts, shale producers are leaving a lot of resource in the ground and that refracturing may be the best solution to recover it.

Halliburton’s fiber-optic data from “plug and perf” wells across several major producing plays indicate that less than 60% of the perforation clusters are effectively producing. This means the remaining 40% did not take in any ­fluids or produce any fractures during the original stimulation.

The company’s microseismic information from 38,000 stages shows that when fractures are initiated into the rock, they are far from uniform. Some may reach deep into the reservoir, while others just barely. “In fact, the difference between what happens in the reservoir with these new wells versus what happens on the geometric drawing board has left even more bypassed reserves,” said Ranjan.

And during the early production of life of a horizontal well, two-thirds of the fractures will lose conductivity, in essence, they close or are cut off from the wellbore. Because of such issues, “it’s making it very difficult for us as an industry to even cross 4% to 8% recovery factors in oil-rich reservoirs,” he said.

However, Halliburton is betting that these problems will be the drivers that help operators embrace refracturing. So far, the results released by the company seem to support its case

In a case study from the Eagle Ford Shale in Texas, Ranjan said that a refracturing job netted an average increase of 121% in estimated ultimate recovery (EUR) in two oil wells producing approximately 1,000 B/D and significantly lowered the production decline rate.

An example from the Haynesville Shale, which straddles Louisiana and Texas, showed that Halliburton was able to achieve a 300% performance improvement in under 2 years as it refined its refracturing process. In early 2013, refractured wells delivered between 0.5 Bcf and 1 Bcf of incremental production. By early this year, the incremental production achieved via refracturing was between 1.5 Bcf and 2 Bcf. The company’s most recent refracs generated between 2.5 and 3 Bcf of uplift.

In an effort to accelerate the rate of adoption, Halliburton has devised three payment plans for its refracturing service. There is the standard commercial fee option. The company is also willing to share the risk by basing compensation on its ability to achieve key performance indicators with regard to increasing EUR or incremental production. The third option involves Halli­burton paying for the entire pilot program itself and taking payment out of the increased production.

Some of the emerging technologies involved in Halliburton’s refracturing service include diversion fluids and a new fiber-optic coiled tubing system called FiberCoil, which can be placed into the target well or an offset well to measure temperature and acoustics. Conventional fiber optics and microseismic technologies are also used during the pilot stage.