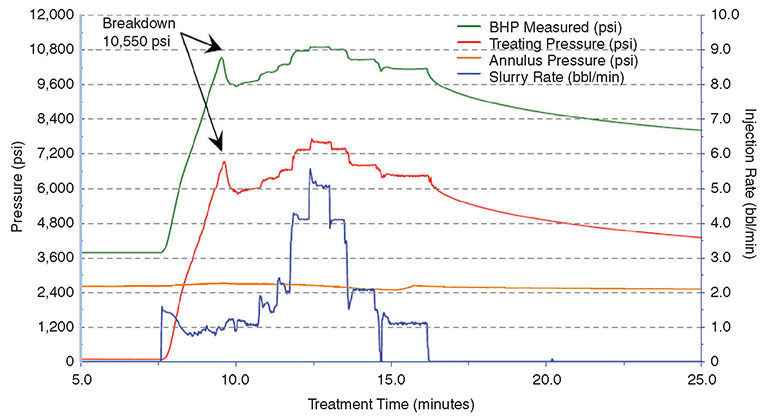 In hydraulic fracturing, the use of diagnostic-fracture-injection tests (DFITs) can provide valuable information. When the measured pressures in such tests are outside the expected range for a given formation, however, a number of possibilities and questions can arise. A recently completed project faced just such a challenge, initially resulting in poor hydraulic-fracturing efficiency and a need to understand the root cause. To this end, a thorough analysis involving a multidisciplinary review team from several technical areas was undertaken, which is described in the complete paper.

Block A lies adjacent to other existing hydrocarbon-producing fields, residing within a large recognized basin. Five vertical exploration and appraisal wells were drilled in Block A to a depth of approximately 2400 m. Initially, these appraisal wells were designed for conventional reservoirs. A brief description of the lithology, rock characteristics, and drilling history is provided in the complete paper.

From the historical regional fracturing-pressure data available, the breakdown and fracturing pressures that would be experienced at the wellhead were predicted to be less than 7,500 psi. During the first DFIT injection operation, the maximum allowable surface pressure was reached without any clear indication of breakdown being achieved in the formation. Several attempts were made to inject into the formation, but there was no effective breakdown and a very low decline rate was subsequently observed.

The high treating pressure observed was initially considered to be potentially a result of plugging of the perforation tunnels or of formation damage. Subsequently, an acid cleanup and an injectivity test were performed with coiled tubing (CT); however, there was no significant positive formation response to this intervention. The wellhead-pressure-­limitation setting was increased to allow a new maximum pressure of 9,500 psi, and the DFIT was attempted once again. A breakdown was finally achieved at a wellhead pressure (WHP) of 8,500 psi, equivalent to a bottomhole pressure (BHP) of 12,341 psi while pumping at 1 bbl/min; a maximum rate of 2 bbl/min was achieved during this DFIT attempt.

A 35-lbm linear-gel system was subsequently injected into the formation to determine if the surface pressures would allow execution of the planned main fracture treatment, but results indicated other­wise. A decision was made to isolate Stage 1 with a sand plug and to proceed to Stage 2 immediately.

This article, written by JPT Technology Editor Chris Carpenter, contains highlights of paper SPE 172956, “Understanding Unusual Diagnostic-Fracture-Injection-Test Results in Tight Gas Fields: A Holistic Approach To Resolving the Data,” by R.N. Naidu, E.A. Guevara, A.J. Twynam, J. Rueda, W. Dawson, E. Moses, and M. Rylance, BP, prepared for the 2015 SPE Middle East Unconventional Gas Conference and Exhibition, Muscat, Oman, 26–28 January. The paper has not been peer reviewed.
...
This article is reserved for SPE members and JPT subscribers.
If you would like to continue reading,
please Sign In, JOIN SPE or Subscribe to JPT