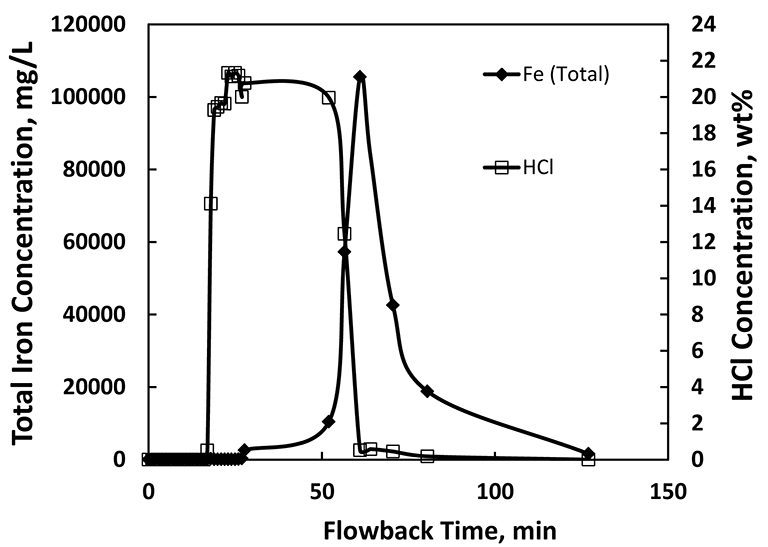 Flowback of HCl and Iron as a function of time after an acidization job on Well E.

FeS is found naturally in different forms. The gas-production systems studied in this paper have large concentrations of hydrogen sulfide, so iron is a limiting reactant in these systems. FeS formation is favored thermodynamically. In anoxic conditions, the solubility of the ferrous ion is aided by the formation of aqueous iron sulfide complexes. As FeS scales sulfidize, they become increasingly difficult to dissolve with acid.

Source of Iron. Iron can come from reservoir rock, drilling fluids, and corrosion during acidization and production. Many reservoir rocks contain small amounts of iron. Contamination and corrosion during the drilling process also could lead to high iron content in drilling fluids. Acidization has been considered to be a primary source of reprecipitated FeS. FeS scale has been found in well tubulars following acid treatments of deep sour-gas wells.

This article, written by Special Publications Editor Adam Wilson, contains highlights of paper SPE 173713, “Corrosion and Scale Formation in High-Temperature Sour-Gas Wells: Chemistry and Field Practice,” by Sunder Ramachandran, SPE, Aramco Service Company, and Ghaithan Al-Muntasheri, SPE, Jairo Leal, SPE, and Qiwei Wang, SPE, Saudi Aramco, prepared for the 2015 SPE International Symposium on Oilfield Chemistry, The Woodlands, Texas, USA, 13–15 April. The paper has not been peer reviewed.
...
This article is reserved for SPE members and JPT subscribers.
If you would like to continue reading,
please Sign In, JOIN SPE or Subscribe to JPT