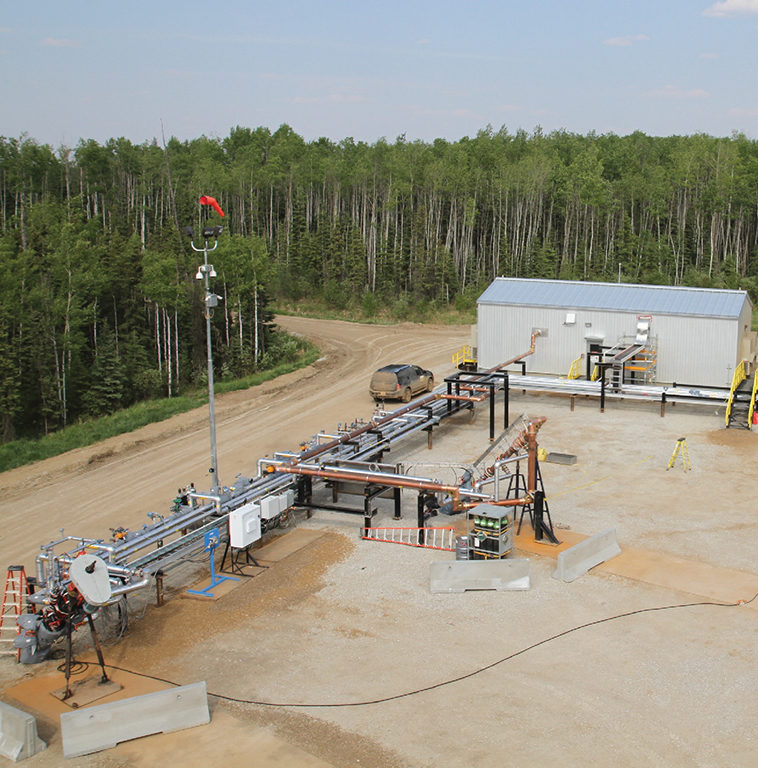 Photo courtesy of Suncor.
The surface facilities pilot project at Suncor’s Dover site in Alberta, Canada, uses radio waves to heat and inject solvents into the upper well of a 2-well pair. The goal is to eliminate the need for steam in producing oil sands crude.

A new device that heats thick oil sands crude with radio waves is being used for the first time in a production well in western Canada. Rather than pumping steam into a well to reduce the viscosity of oil as thick as peanut butter, the new method combines an electromagnetic heating element and a solvent to mobilize the crude at a much lower temperature.

Suncor Energy is leading the four-company group doing the pilot with support from the province of Alberta, which is backing projects developing affordable ways to reduce emissions from oil sands operations.

The pilot began by heating the well using a specially created antenna from Harris Energy Solutions. The US defense contractor used what it has learned to reduce the heat emitted by military communication devices in a totally different way.

The well design is similar to steam-assisted gravity drainage (SAGD) well pairs widely used in the oil sands of western Canada. The antenna will be installed in the upper well where a solvent will be injected to further thin the bitumen—an ultrathick form of crude—resulting in oil flowing downward into a production well. The new process is called enhanced solvent extraction incorporating electromagnetic heating; it is mainly known by its acronym ESEIEH (pronounced “easy”).

Key elements: A 24-month test of heating using a radio antenna and a solvent to mobilize the bitumen.

“The ESEIEH technology, if successful and commercially viable, has the potential to improve economic and environmental performance in the oil sands by eliminating the need for water at in-situ operations, reducing greenhouse gas emissions, and decreasing our environmental footprint,” said Gary Bunio, general manager of oil sands strategic technology at Suncor.

On the surface, the new method requires far less equipment than SAGD wells that require boilers to heat water, deliver it to wells, and then separate the oil from the water, which requires further treatment. Emissions are reduced because it is expected to use up to 75% less energy, according to Suncor.

The heating element will warm the reservoir to about 60°C compared with about 240°C in a SAGD well, said Mark Blue, manager of new ventures at Harris. At that temperature, the viscosity of the oil has been reduced significantly, and the effect of the solvent has been enhanced, which is expected to allow the lower-energy combination to equal the effect of steam heat.

“The goal in the first phase of testing was to develop an understanding of radio frequency (RF) heating in an oil sands pay zone,” said Mark Bohm, manager of in-situ technology development at Suncor. “Now that we’ve done that, the objectives for this phase will be to add solvent to the RF heating process in an in-situ reservoir. We’ll be evaluating the results of this test to determine the right path forward for commercializing the technology over the next few years.”

The 24-month production test at Suncor’s Dover test site in Alberta will monitor how the well performs, the cost, the percentage of solvent recovered, and how it performs compared with predictions by computer simulations developed by Harris.

The heating element is a center-fed dipole antenna—an advanced version of the rabbit ear antennas once used to pick up broadcast television—using a radio signal in the bandwidth used for AM radio, Blue said.

Harris engineers applied what they learned when reducing the heat emitted by communication antennas to create one that broadcast radio waves in a way that heated the area around it. Electric-powered heating methods have been tried in the past, but were never as effective or efficient as steam. The company has modified the design to create a model that is simpler, more rugged, lower cost, and faster to install, he said.