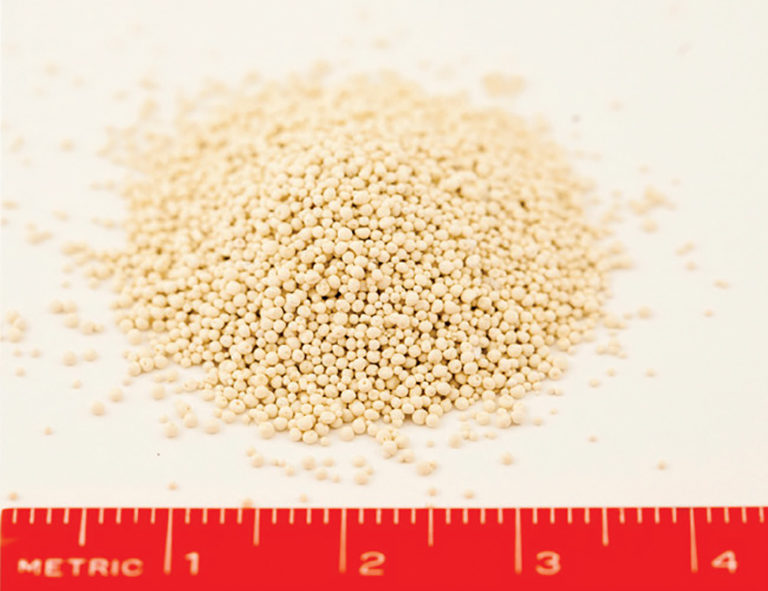 A Canadian company has developed a lightweight polymer that can grow to a predetermined size when submerged in water.

Although it is capable of swelling up to 10 times its original volume, the polymer’s growth can be “programmed” ahead of time to prevent blocking of production pathways if used as a proppant, said Sumitra ­Rajagopalan, founder and chief executive officer of Bioastra Technologies.

The material is also slightly pliable in its enlarged state, allowing it to bear compressive forces without becoming brittle and crushing.

Rajagopalan’s company makes smart materials, meaning that they change their properties based on external cues such as voltage or temperature. It sells many of its products to the biomedical industry.

The company recently became interested in researching oil and gas applications through its participation in the first GE Statoil Open Innovation Challenge. Entrants were asked to find ways to reduce or replace the use of sand in hydraulic fracturing. Bioastra was one of five winners.

In July, GE and Statoil started accepting submissions for a second challenge aimed at reducing or reusing water in onshore oil and gas operations. Organizers will accept entries until 24 September and winners will be announced in November.

Another winning contestant, University of North Dakota researcher John Hurley, focused his efforts on creating a lightweight ceramic proppant that can be manufactured from raw materials available in the Williston basin, instead of relying on shipments from other states.

Manufacturers tend to locate proppant factories close to deposits of high alumina clay, the primary ingredient in ceramic proppant. High alumina clay is not readily available in North Dakota, so high volumes of proppant must be shipped for fracturing in the Bakken Shale.

Hurley is working to make low alumina clay a feasible proppant material with a process called devitrification, which converts the troublesome glass that forms during sintering back into a stable crystal structure.

The method is still in its early stages, but Hurley thinks that with more research, he can unlock the potential of the cheaper, more common clay.

The open innovation challenge received more than 100 entries and attracted interest from multiple industries. Food, medical, and manufacturing companies were some of the most common participants, said Rich Luht, program manager of drilling and production systems at GE.

Each winner received USD 25,000 and is eligible for possible future investment and collaboration from GE and Statoil.

Descriptions of the winning entries, which are posted at https://ninesights.ninesigma.com/web/trucking-challenge-landing/winners-highlight, are one way for the general public to see innovation in the oil and gas industry that often goes on behind closed doors.

“I think if most people understood the scale and pace of technology innovation, they would be astonished at things that we and the other operators and big suppliers are actually doing,” said Bruce Tocher, shale oil and gas research manager at Statoil.