Fracturing and Natural Gas in Groundwater: Is There a Connection? 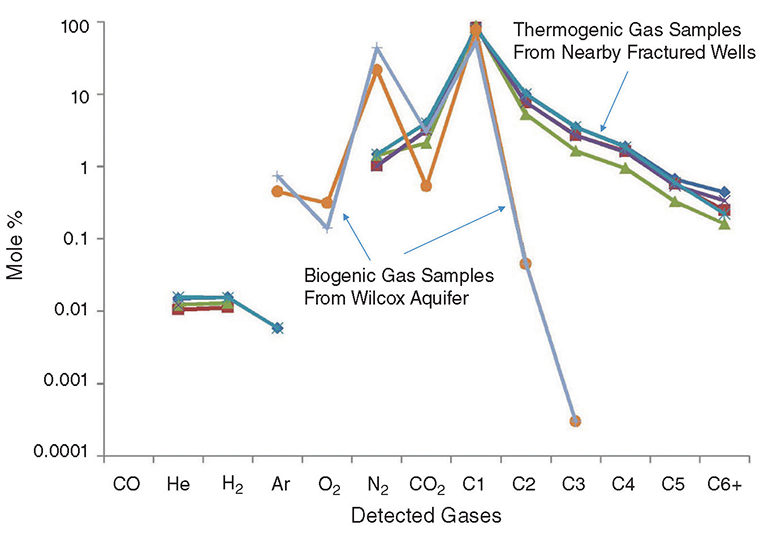 Editor’s note: Professionals in the oil and gas industry often receive questions about how industry operations affect public health, the environment, and the communities in which they operate. Of particular concern today is the impact of hydraulic fracturing on the environment. In this column, JPT invites energy experts to put those questions and concerns about industry operations into perspective. Additional information about the oil and gas industry, how it affects society, and how to explain industry operations and practices to the general public is available on SPE’s Energy4me website at www.energy4me.org.

Anyone who has watched films such as Gasland and Promised Land is aware of the alleged dire consequences to groundwater resources from the petroleum industry’s decades-old practice of hydraulic fracturing of tight formations to release hydrocarbons.

Gasland (a “documentary”) and Promised Land (a movie starring Matt Damon) purport to expose such threats, which are highlighted in the form of natural gas discharging from groundwater or flares from the kitchen faucets of landowners whose water wells are located near fields with recently fractured wells.

Such representations are intended to create the impression that fracturing opens pathways from deeply buried strata for the migration of natural gas, brine, and drilling fluids to shallow formations that are sources of groundwater for cities and rural areas where fracturing is a common method for oil and gas extraction. The print and broadcast media are complicit in the matter, as both have piled on to fan the sentiment of Americans against this method of developing much needed natural gas resources.

A consequence of antifracturing films and reporting is confusion among the public and attempts by environmentalists to ban fracturing.

Natural gas is derived from different sources. Most of what we think of as natural gas is produced within the deep subsurface under high-temperature and high-pressure conditions (thermogenic gas). A much smaller component is derived from the production of gas in the shallow subsurface under low-­temperature and low-pressure environments (biogenic gas, that is, coal beds, swampy environments, and landfills).

Geochemists can differentiate be-tween thermogenic and biogenic gases by looking at their carbon compositions (as illustrated by gas chromatographs) and their carbon and hydrogen isotope signatures.

This column focuses on the role of gas chromatography as a differentiator of biogenic and thermogenic gases. Carbon and hydrogen isotope ratios will be the subject of another column.

Because of the different environments in which natural gases are generated, thermogenic gases and biogenic gases can be expected to have distinct compositions. All hydrocarbons are carbon-based compounds with the number of carbon atoms of the components ranging from one to as many as 30 (C1 to C30). For our purposes, we are interested only in those components with one to six (C1 to C6) carbon atoms, which are methane through hexane, respectively.

Biogenic gases are primarily methane (C1) and very little ethane (C2) and, in some cases, propane (C3), with methane usually accounting for 99% or more of total gas. Thermogenic gas consists of measurable components of fractions heavier than methane (that is, C2 through C6 gases).

The difference between thermogenic and biogenic gases is illustrated in Fig. 1 (above), which shows the composition of the gas samples collected from the groundwater of the Wilcox aquifer and produced-gas samples from nearby fractured wells that were thought to have been the source of natural gas in the aquifer, approximately 10 miles north of Shreveport (Caddo Parish), Louisiana. The figure shows the percentage (by mass) of each hydrocarbon and nonhydrocarbon gases detected in the samples.

There are distinct differences between biogenic and thermogenic gases. The samples of biogenic gas, collected from the aquifer, include large percentages of the nonhydocarbon gases argon (Ar), oxygen (O2), and nitrogen (N) (all of which are dominant components of atmospheric gas), a large percentage mass of methane, and very little ­ethane and propane. In these samples, the ratio of methane to ethane and propane is much higher than 1,000. These high ratios are characteristic of biogenic gases, which are considered to be “dry.”

The samples of thermogenic gas, collected from recently fractured wells within one mile of the water wells from which the samples of biogenic gas were collected, are deficient in the atmospheric gases, but are dominated by methane through hexane. Furthermore, the ratio of methane to ethane and heavier hydrocarbons in the samples is less than 50. Such low ratios are common to thermogenic gases.

The hydrocarbon composition illustrated in can be considered to represent the “fingerprints” of the different samples of gas. Clearly, there are distinct differences between the chromatographic patterns of the biogenic and thermogenic gases and this demonstrated difference removes the fractured wells as the source of the natural gas in the Wilcox aquifer.

My further investigation of this matter pointed directly to an association with lignite beds in the Wilcox as the source of the natural gas found in the groundwater wells. Lignite, a low-rank coal, is widespread throughout the shallow subsurface of northwestern Louisiana.

Heavy pumping of water wells during an extended period of below-­normal rainfall (drought) caused lowering of water levels in domestic wells throughout the area. The lower water levels reduced pressures just enough to allow biogenic gas to migrate toward pumping water wells. We also found, in the driller’s notes on one of the water wells, descriptions of lignite within the 50-ft screened interval of the well.

I have looked at many such cases in Louisiana in which natural gas is detected in groundwater. In every such case, whether in northwestern Louisiana, central Louisiana, and southeastern Louisiana, all of the geochemical signatures are consistent with the biogenic gas produced in shallow subsurface environments, and not with thermogenic gas migrating from fractured formations deep within the subsurface.

This underscores the importance of not rushing to judgement on the assumed effects of fracturing, but to take a close look at local and regional geological factors that easily account for the generation of biogenic gas.

Bruce K. Darling is a senior consultant with Geosyntec Consultants. He has worked for 33 years as a geologist in the energy and environmental industries. As a consultant, he has represented clients in the petroleum, mining, electric power, and radioactive-waste disposal industries. He has also directed field programs in Kenya for nonprofit organizations involved in the development of water resources in eastern Africa. Much of his petroleum-related consulting work is in support of producers faced with litigation over allegations of soil and groundwater contamination associated with leases in Texas and Louisiana. He works from offices in Austin, Texas, and Lafayette, Louisiana. He holds an MS in geology from the University of Louisiana at Lafayette and a PhD in hydrogeology/geochemistry from the University of Texas at Austin.

Fracturing and Natural Gas in Groundwater: Is There a Connection?