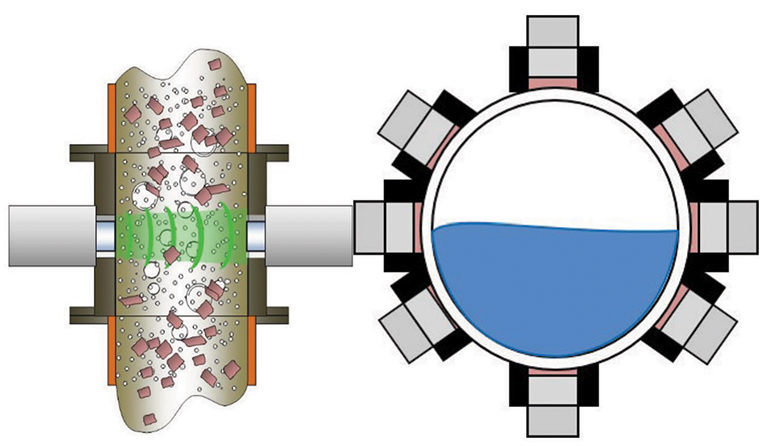 Image courtesy of Onsite Integrated Services.
By using ultrasonic sensors that can be wrapped around a flowing pipe, detailed information can be gathered about the contents of drilling fluids. This technology could be used to improve a number of different drilling operations.

Technology developers are working on a new ultrasonic flowmeter for drilling ­fluids aimed at obtaining better measurements than current systems with far fewer disruptions to rig systems. The proposed instrument may be wrapped around a rig’s suction line or flowline to provide a second-by-second analysis of flow rate, density, rheology, and particle size distribution.

The developers’ goal is to use the data obtained from the wrap-around clamp-on device to quickly address critical drilling issues such as well control, kick detection, stuck pipe, mud pump efficiency, and the evaluation of routine, but difficult to monitor tasks such as hole cleaning efficiency and hydraulics optimization.

Jason Norman, a managing partner at Onsite Integrated Services (OIS)and a former senior drilling engineer at Apache and Shell, is leading the team in building the new device. Although drilling mud may only account for about 15% of the cost of a drilling operation, a major improvement is needed in this area because poor mud management can cost much more, he said.

“Nearly every nonproductive time event we have on a drilling rig has some link back to drilling fluids,” with the exception of equipment failure, Norman said. “If something is happening with your well while drilling, cementing, or logging, chances are it can be tied back to our drilling fluids in one shape or form,” he said.

If the research and development project is successful, the ultrasonic meter will be a superior alternative to the Coriolis meter, which is widely used on onshore and offshore rigs to measure the mass flow of drilling mud. The system is being developed in partnership with a European-based sensor development company, TSK Solutions, and should be ready for field testing by the fourth quarter of this year.

Norman said an ultrasonic device will provide significantly more accurate measurements and allow for better decision making. A key advantage of the company’s technology over the Coriolis meter is that it will be much less invasive as the latter must be physically installed in the flowlines on a rig.

“If I can show up on a rig and all I have to do is wrap my meter around  your pipe, without having to penetrate it, weld anything, or do any cutting, there is going to be less reluctance” to use it, he said.

The industry has adopted the Coriolis meter because it is the only system capable of offering reliable flow data for drilling mud, ­Norman said. “But it is not the ultimate solution. It is just a placeholder,” until a better system is created, he said.

By using the ultrasonic meter to obtain high-definition density and rheology data, companies will be able to build real-time hydraulic and torque-and-drag models that are currently being developed with estimated inputs. And better models should result in improved drilling efficiency.

Once it has a working system, the company hopes to develop the ultrasonic meter into an early warning system with artificial intelligence to automate different processes when a problem is detected.

This paper describes how new technology was implemented and deployed through a downhole acoustic network through a sequence of runs in complex North Sea wells under managed-pressure conditions.