A Biotech Answer to a Driller’s Problem 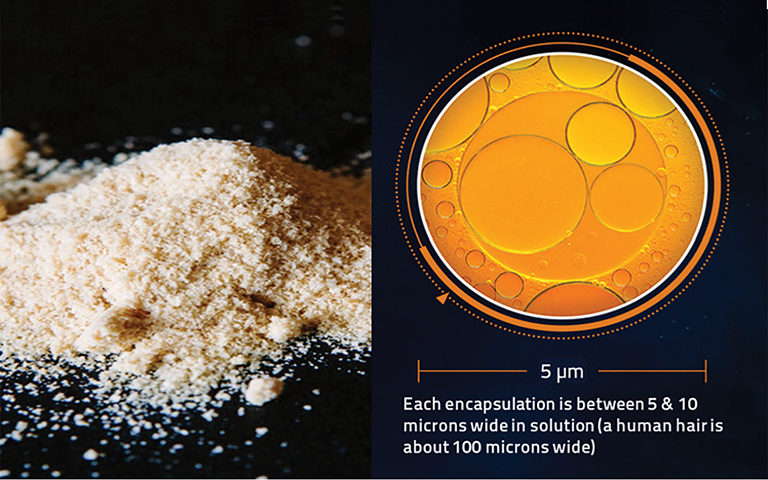 Images courtesy of Solazyme.
Lubricant encapsulated in a polymer coating looks like a pile of sawdust. The oil inside the product called Encapso is released during drilling when it encounters friction from hardware in the hole.

A biotechnology company from the San Francisco Bay Area is selling a futuristic solution to an old problem: lubricating drill bits grinding though rock.

The product is a high-grade lubricant made from algae and is encapsulated in a polymer shell, hence the name Encapso. Coating the oil segregates the lubricant from the drilling fluid until it encounters hard contact or friction during drilling, such as a rotating drill bits on rock.

It sounds like a research and development project, but it has been on the market for more than a year and used in more than 40 wells, most of which are horizontal ones drilled in unconventional plays.

Cliff Baratta, a senior marketing associate for Encapso at Solazyme, said its lubricant increased the average rate of penetration (ROP) by about 20% in cases in the Williston Basin, where it has been used most often. Other examples offered gains ranging from nearly 10% to 40% when using water-based drilling fluid. The torque during drilling was also reduced.

Solazyme got into exploration and production because it needed a market for a high-performance lubricant it makes from algae. While growing oil this way has long been touted as the biofuel of the future because it could be refined like petroleum, no one has found a way to produce huge volumes of it at a competitive price.

The oil industry attracted Solazyme because it needed a niche market where it could deliver performance that justified using a product at the high end of the price range for lubricants. It needed to an edge. Literally, it turned out, in the form of a coating made of polysaccharide, a type of carbohydrate, which is able to isolate the lubricant from the drilling fluid until it was needed at a point of contact.

“The coating reduces chemical reaction interactions” between the fluid in the well and the lubricant, said Ray Nagatani, a director of Encapso product marketing at Solazyme.

The company did a series of tests to persuade customers that a product that looks like sawdust could outperform a liquid lubricant or glass beads.

Results of laboratory work, testing in a well at the Catoosa Test Facility in Hallett, Oklahoma, and a field test the northern Denver-Julesburg Basin were reported in a paper (SPE 169547). It showed that in a water-based fluid, Encapso performed as well as liquid lubricants, but lasted longer because it was released when needed. This allowed unused capsules to remain in the drilling fluid for use in the next well.

The amount used per well varies. The lubricant makes up about 2% to 6% of the drilling fluid mix and about 20% to 50% of the coated lubricant that must be replaced while a well is drilled depending on how fast the well was drilled, and formation conditions, Nagatani said.

So far, Encapso has been mainly used in wells drilled with water-based ­fluids, where it offers the largest benefit. Nagatani said that adding the higher-quality lubricant in Encapso to a diesel-based mud improves performance.

But the gains are not as large as in water-based fluid. Lab testing cited in the SPE paper showed that encapsulated oil reduced the coefficient of friction in water-based mud from 0.3 to the approximately 0.1 level, which it said was generally observed in oil-based muds.

The company is working with Flotek, a service company with a diverse product line includes oilfield chemicals, to create a water-based fluid with Encapso and other additives that performs like oil-based fluids, but at a lower cost and with less potential environmental impact.

A Biotech Answer to a Driller’s Problem