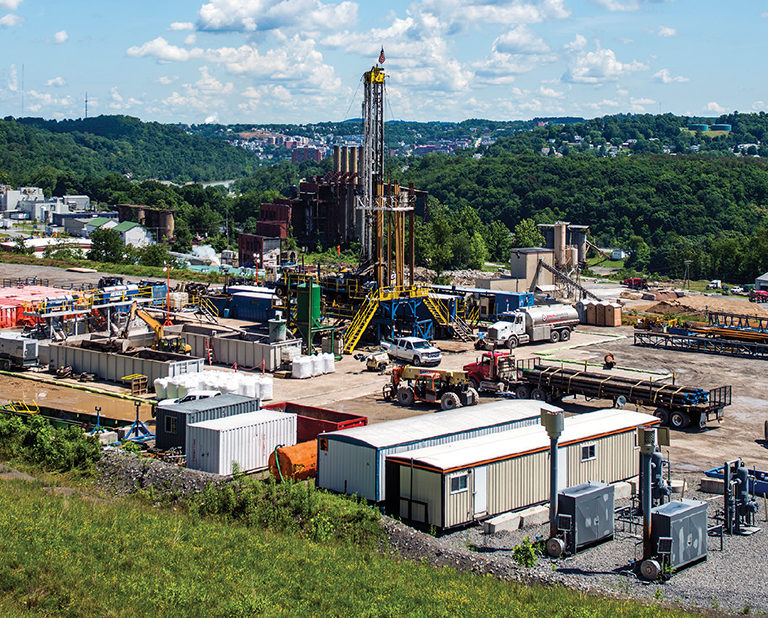 Photo courtesy of Northeast Natural Energy.
Drilling began in late June on a three-well project—two production wells and a vertical observation well—near Morgantown, West Virginia. They are the focus of a long-term research project to better develop the Marcellus formation, and measure its impact on the environment, economy, and public opinion.

Learning by doing is taking on a new meaning at universities that are constructing “science wells” to study shale exploration and production from below, and above, the surface.

West Virginia University has begun drilling two gas wells with a vertical observation well in between them on a site not far from its campus in Morgantown, West Virginia.

The heavily instrumented vertical well is at the heart of the work by the Marcellus Shale Energy and Environmental Laboratory, a public/private partnership created to take an unusually detailed and public look at a gas well in the prolific formation.

“We thought of it as a tool for teaching, as a research lab, as well as a permanent part of the vision of what we want to do,” said Brian Anderson, director of West Virginia University’s Energy Institute, which coordinates projects including the Marcellus Shale laboratory.

The university has partnered with Ohio State University, which is working on a companion effort called the Utica Shale Energy and Environment Laboratory. Both long-term studies plan to look for ways to improve how wells are designed, drilled, and produced, and research how the development of these formations will shape the area’s environment, economy, and public opinion.

“It is really part of the mission as a land-grant university to research the energy and environmental issues related to shale development,” said Jeff Daniels, who is project director for the Ohio State University Subsurface Energy Resource Center, which is creating the Utica Shale laboratory.

The land grants he refers to were provided by the US government in the 19th century to help fund the creation of universities as the country spread westward. From early days the mission of these universities included supporting the local economy with agricultural research and education programs. With shale wells sprouting up across the countryside, these institutions are now adding facilities for exploration and production field research.

In recent years, companies such as Noble Energy have built heavily monitored well clusters seeking ways to more effectively drill, fracture, and produce wells. Like the industry, the Marcellus Shale laboratory plans to equip the observation well with microseismic receivers to monitor fracturing, and the producing wells with fiber-optic cable to observe changes in the pressure, temperature, and the sounds during fracturing and afterward. Terabytes of data combined with extensive logging—done by the technology partner, Schlumberger—will be used to create a detailed reservoir model and analyze well performance.

The Utica project is considering other approaches, Daniel said.

Unlike corporate test wells, most data will be disclosed. For universities these shale studies will be valuable for reasons ranging from generating ways to improve well performance, to aiding professors seeking real-world data for research.

“One of the reasons for getting funding is there is a dearth of information out there for people to work on,” Daniels said.

Disclosure is required by the primary backer of the projects, the US Department of Energy’s (DOE) National Energy Technology Laboratory (NETL), which is covering nearly 80% of the USD 20 million budget for the science wells and data gathering.

The Marcellus Shale lab’s producing wells will be drilled, completed, and paid for by its industry partner, Northeast Natural Energy. The independent company based in Charleston, West Virginia, provided the site where it will be drilling wells to add production to make up for declining older wells, and it is picking up the university’s share of the cost.

“The DOE contribution is USD 7,355,538 and our cost share is USD 2,814,930,” which is about 28% of the total, well above the 20% level required by DOE, Anderson said. “All of our cost share is covered by Northeast Natural Energy and we wouldn’t have been able to do it without their partnership.”

Ohio State University is in contact with possible partners who can choose from several possible locations to drill, Daniels said. What is learned in the projects will be released, though there will be some lag time.

“We have no deals with Northeast Natural Energy other than protecting business-sensitive information such as salaries. The same with Schlumberger. We will protect proprietary technologies but not the results,” said Tim Carr, project director for the Marcellus Shale Energy and Environmental Laboratory, and the professor who led the effort. All data will be made available, but only after the project researchers have a chance to analyze and integrate it.

Another difference in the Marcellus Shale lab plan is the amount of work planned on surface effects. Before drilling begins, the partnerships will have spent months measuring air and water quality, as well as the traffic and noise levels to establish a baseline measure of conditions before drilling.

The advance work is supported by experts from NETL and US Geological Survey who are advising the project teams on air- and water-quality measurements.

While studies on the surface impact of shale wells are not aimed at maximizing long-term production, the work could have a significant effect on the future of unconventional development in the region.

The university teams—each school has about 20 academic researchers involved—mix geology and engineering professors with environmental, economic, and government policy experts who will be doing long-term studies on the impact on the environment, jobs, and public opinion.

The history of the Marcellus test site is evidence of the prominent role that environmental concerns and public opinion can have on shale development. Before the first two wells were drilled 4 years ago at the pad site just outside of Morgantown there was a campaign that nearly blocked them. Back when the national furor over fracturing was loudest, an organized campaign against it convinced the Morgantown city council to ban fracturing within its borders, and for a mile outside of them, Anderson said.

A court struck down that ban, and the two older wells on the test site have provided a significant amount of the gas required for the city, with a population of 30,000, and a university with about the same number of students, Anderson said.

Drilling has begun again in West Virginia, but there has been no sign of opposition there, said Carr.

In Ohio, the reaction has been “very positive. We really have not received any real push back” since announcing a deal with a water conservation district for a drilling site, Daniels said.

The locations chosen for the two projects complement each other.

In West Virginia, the wells are on a producing well pad in an industrial area. Nearby is Morgantown Industrial Park, which is home to a large, old chemical complex, whose history of required environmental cleanups is covered on the US Environmental Protection Agency website. But with the Monongahela River running next to the site, and the city downstream, there are plenty of environmentally sensitive spots to monitor within the 2.5 mile radius of the wellsite covered in the study.

Ohio State University is talking to several possible partners to drill on land within the Muskingum Watershed Conservancy District, which manages lakes and recreation areas covering more than 8,000 sq miles in eastern Ohio.

These locations are generally in wooded areas that have not been drilled. With more than a 1,500 wells drilled in surrounding counties in eastern Ohio, though, potential industry partners should have ample information to evaluate the sites.

“We are planning to begin environmental (air and water testing) work in August,” Daniels said. “Hopefully drilling commences a year later in 2016.”