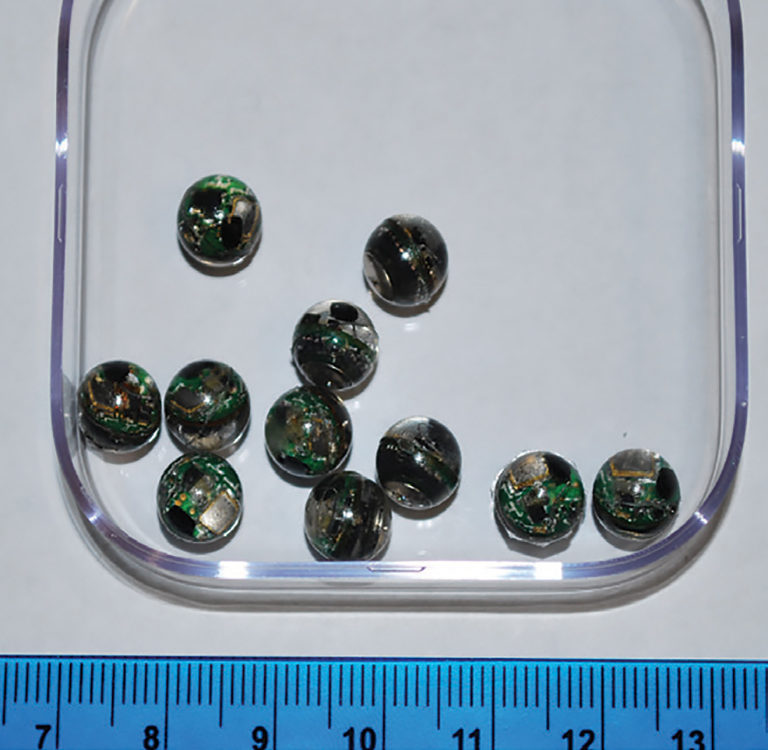 Photo courtesy of Zhaorui Shi.
Inside the small balls (7.5 mm diameter) are sensors that record pressure or temperature while traveling through a well.

A new miniature pressure/temperature sensor comes packaged inside a tough small ball capable of traveling to the bottom of a well while drilling and returning with data on board.

The outer shell of the ball allows electrical components printed on a circuit board to survive a trip in the drilling mud to the bottom of the well, survive a close encounter with the drill bit, and return with readings along the way that can be wirelessly downloaded.

Creators of the balls are seeking a lower-cost alternative to logging tools located behind the drill bit. The tracer was created by a company started by Mengjiao Yu, an assistant professor of petroleum engineering at the University of Tulsa, with backing from Saudi Aramco.

While there are measurement-while-drilling tools available that can constantly send data to the surface using mud-pulse telemetry, those sensors are fixed near the end of the drillstring.

The sensor balls are designed to record pressures and temperatures at a set rate on a trip lasting more than 2 hours. They are either dropped in during a pipe connection or deployed using a tracer injection system.

Laboratory and well tests showed they are “accurate and reliable,” said Zhaorui Shi, who has led the development of electronic components for the ball. At the recent SPE Digital Energy Conference and Exhibition in The Woodlands, Texas, he delivered a paper (SPE 173435) based on work done while he was a student at the University of Tulsa that said the tracers were accurate within 0.5°C in temperature measurement and within 0.05% in pressure, though further testing was needed to verify the latter number.

The current design is based on what was learned in a 2012 test. The shell protecting the sensor was made tougher—5 of 12 balls initially tested were broken—and the chip inside was simplified to reduce the circuit size, power consumption, and memory needed by measuring either temperature or pressure, rather than both. The coating is close to the density of drilling fluid, allowing balls to move easily in the well.

A new ball collector was built to catch the sensors as they returned from the well. “It is hard to find chips in oil-based mud,” said Shi. To solve the problem, a new collection system was created using magnets.

Over the two latest tests, 9 of 14 tracers were recovered. They survived a trip down the hole and back in a 13,800-ft well in Saudi Arabia, where the maximum bottomhole temperature was 152°C and the pressure was nearly 10,000 psi.

The test showed that battery life remains an issue. The pressure tracer stopped recording at the bottom of the well because its battery ran down quickly in the high-temperature environment. One possible solution is to install a switch inside the tracer that will allow the conservation of power by delaying the start of measurements until after the tracer clears the upper well sections, Shi said.

The types of advancements made in real-time drilling data acquisition and processing are now on the doorstep of the North American completions sector. Technology developers are banding together under the umbrella of “coopetition” in a bid to change the way producers fracture tight reservoirs.