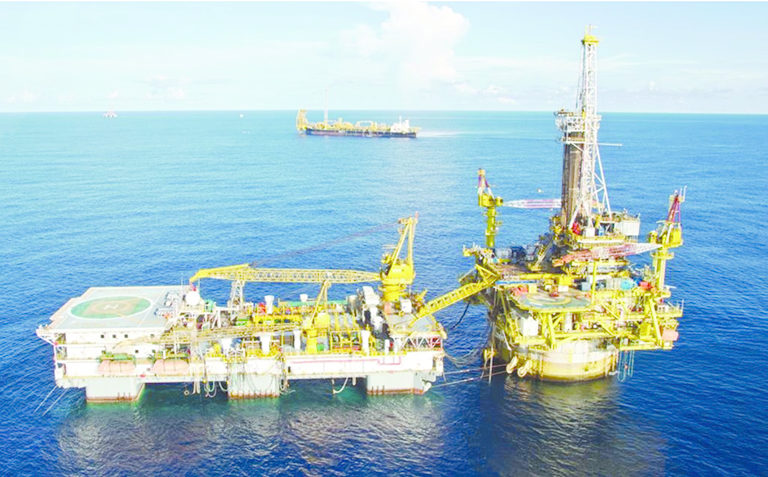 Fig. 1—Photograph of Kikeh field surface layout showing the Seadrill West Menang semitender contracted for well workover in the left foreground, the Murphy Kikeh spar DTU in the right foreground, and the Kikeh FPSO in the background.

A deepwater field located offshore Sabah, east Malaysia, features a spar dry-tree unit (DTU) and multiple subsea-hub tiebacks to a floating production, storage, and offloading vessel (FPSO). In early 2011, several of the wells began producing solid fines that affected production. It was decided that a long-term solution would be to recomplete the affected wells with enhanced downhole sand control on the lower completions. The short-term solution consisted of installing a topside sand-management system on the spar and sand-sparging equipment on the FPSO separators.

The Kikeh field is located 120 km northwest of the island of Labuan at approximately 1300-m water depth. The field was developed using a standalone facility, with hydrocarbons being produced from both subsea and dry-tree wells from a spar/DTU facility. The oil is processed, stored, and exported from an FPSO. Fig. 1 above shows the layout of the field.

In December 2008, the Kikeh field began to produce solids at varying rates, and by January 2010, after the failure of a sand-screen completion on one of the wells, the process facilities on the FPSO started to receive approximately 1 t/d of sand. Once it became apparent that solids production would be experienced throughout the life of the field, a program had to be developed to address the challenge.

This article, written by JPT Technology Editor Chris Carpenter, contains highlights of paper OTC 24705, “Upgrade of Spar Topside With Comprehensive Facilities Sand-Management System,” by Y. Loong, Murphy Sabah Oil, and H. Rawlins and D. Goo, eProcess Technologies, prepared for the 2014 Offshore Technology Conference Asia, Kuala Lumpur, 25–28 March. The paper has not been peer reviewed. Copyright 2014 Offshore Technology Conference. Reproduced by permission.
...
This article is reserved for SPE members and JPT subscribers.
If you would like to continue reading,
please Sign In, JOIN SPE or Subscribe to JPT