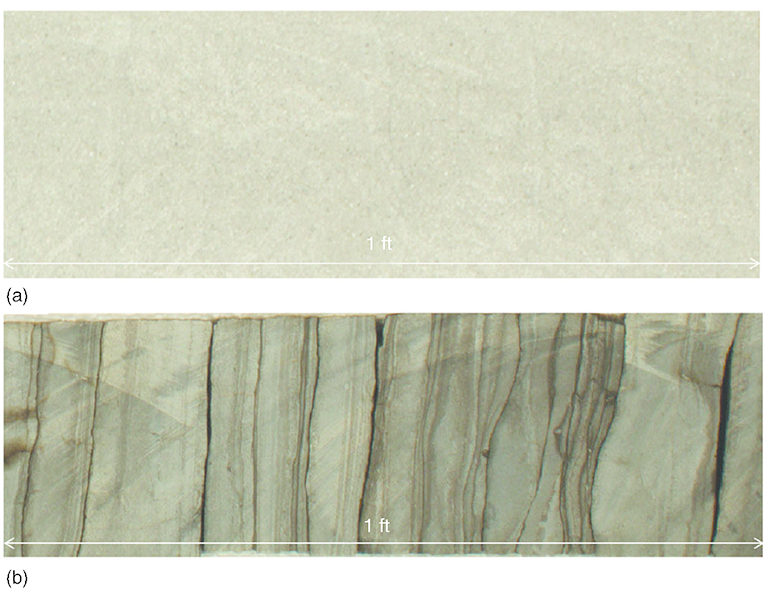 Today, unconventional-reservoir characterization is actively studied; however, rock-mechanics tests are still restricted to intact rocks. Intact intervals are necessary to acquire plug specimens (Fig. 1a above). Anisotropy caused by the presence of various discontinuities affects rock-mechanical properties significantly. Shale formations consist largely of laminations, pre-existing microcracks, and fractures along bedding planes (Fig. 1b above), and they inhibit sample preparation with the standard geometry (1:2 ratio of diameter/length).

The primary purpose of this study is to develop a method that overcomes the restrictions of rock-mechanics tests with respect to unconventional shale formations. This study applies an Equotip Hardness Tester (EHT) and uses its rebound hardness numbers (RHNs) to estimate unconfined compressive strength (UCS) with the recovered cores from shale formations.

The EHT was originally developed by Dietmar Leeb (1978) to measure the hardness of metallic materials. Recently, its use has been extended to various intact rocks to estimate their UCS values (Meulenkamp 1997; Meulenkamp and Grima 1999; Papsworth 2014; Verwall and Mulder 2000). The EHT is a small, portable, electronic, battery-operated, spring-loaded device. A spherical tungsten carbide tip impacts the metal or rock surface driven by a constant spring force, then rebounds. The impact and rebound velocities of the tip are measured and converted into RHNs (Proceq 2014). Fig. 2 presents a schematic of the impact device.

Recovered cores are generally cut and divided into two sections: a “slab” section (one-third) and a “butt” section (two-thirds). This study employs 4-in.-­diameter shale cores and investigates the thickness effect for both sections. The impact direction of the EHT is perpendicular to the cut face of each core section, and fixed at a vertical angle (90°) to avoid the gravity correction. The measurement is repeated closely at the same depth, but at different spots to take the average value recorded for each depth.

Fig. 3 plots the logging of RHNs for each core section. It shows clearly that the RHNs of butt sections are higher than those of slab sections. This indicates that the thicker butt sections represent the UCS of the rock better. However, both RHN curves correspond closely and have similar standard deviations. It is important to note that there are convenient advantages when using slab (one-third) cores: easy access to cores, fast measurement of RHN throughout long core intervals, and far less labor, among others. Thus, this study develops the empirical calibration equations for both slab (one-third) and butt (two-thirds) core sections.

Calibration of RHNs to UCS

According to the literature, the RHNs were calibrated to estimate the UCS ­values of natural rocks using a total of 62 data points on the basis of five different rock types. Overall, the UCS values increase exponentially as the RHNs increase. None of the previous research performed for this topic was associated with unconventional formation rocks such as shale.

Shale cores usually contain lamination, so this affects test results with data scatter. Thus, this study conducted two series of uniaxial compressive tests with shale plugs taken at the same depth. Taking the average UCS value reduces the variation of data. The test results are summarized in Table 1. As a result, the UCS range of the shale formation is 3,899 to 11,196 psi. 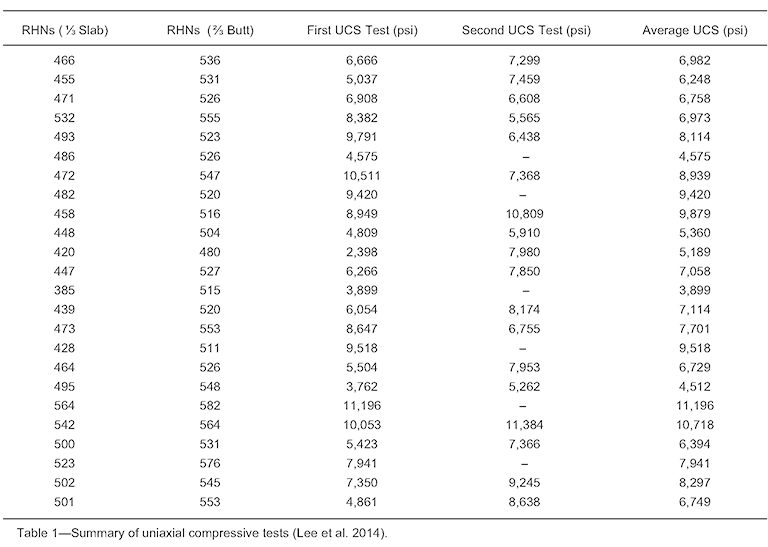 To calibrate RHNs to UCS, the following procedures are required. First, the relationship of the RHNs and the UCS value at each depth must be plotted. Second, the calibration equation must be updated. Third, the UCS values at nontested shale intervals must be estimated by use of the equation. Finally, the UCS profile over depth must be generated.

Fig. 4 plots the calibration of RHNs to UCS for the slab sections. The data from other rock types referenced in the literature are used to obtain the best curve fitting for the calibration equation. With the updated equation, UCS values are estimated for the remaining intervals of the shale formation, in the range where the RHNs are measured and the lithology of the measurement is the same. When a lithology is different or a formation boundary shifts, it is recommended to repeat the procedures described previously. Fig. 5 plots the calibration for the butt sections. The accuracy of the calibration equation is higher on the basis of the thicker mass.

The empirical calibration equations for both core sections are defined as:

This study applies the calibration equations to a shale formation with laminated and fractured intervals. Fig. 6 shows both UCS values estimated by the EHT (displayed in the center of each foot) and UCS values determined by uniaxial compressive tests (displayed as the boxed text at the exact depth that the plug sample was taken).

A logging of strength in shale formations is difficult because of very limited data based on the sampling availability at intact portions. In contrast, the UCS log generated by the EHT shows the continuous data with good resolution at every foot, except for completely crushed or missing core intervals. Therefore, it is possible to generate a UCS log profile over depth for typical shale formations by use of this technique, as shown in Fig. 6.

Fig. 7 is a plot comparing three UCS logs: two UCS logs estimated by the RHNs with slab and butt sections, and one UCS log determined by laboratory tests. All UCS logs show the similar trend of strength variation over depth. However, it is observed that the data from the slab underestimates the UCS values, while the data from the butt is matched better with the laboratory-test results.

The UCS logs estimated by the EHT and determined by laboratory tests show a strong correlation (Fig. 7). Few UCS data points by RHNs diverge from the UCS laboratory data. The divergence can be explained by the differences in the structure of the sample tested. A uniaxial compressive test determines the strength of a plug specimen from the intact portion and applies the quasistatic loading to the rock’s failure through the physical processes of grain crushing, pore collapse, crack sliding, and dilation. In contrast, the EHT is a nondestructive test device that records the RHNs on the basis of localized mineral sizes and takes their average over specified intervals where microcracks, pores, and laminations may exist. Because of the fundamental differences between these two methods, part of the UCS data can vary.

Meulenkamp, F. 1997. Improving the prediction of the UCS, by Equotip readings using statistical and neural network models. Memoirs of the Centre for Engineering Geology in the Netherlands, 162: 127.