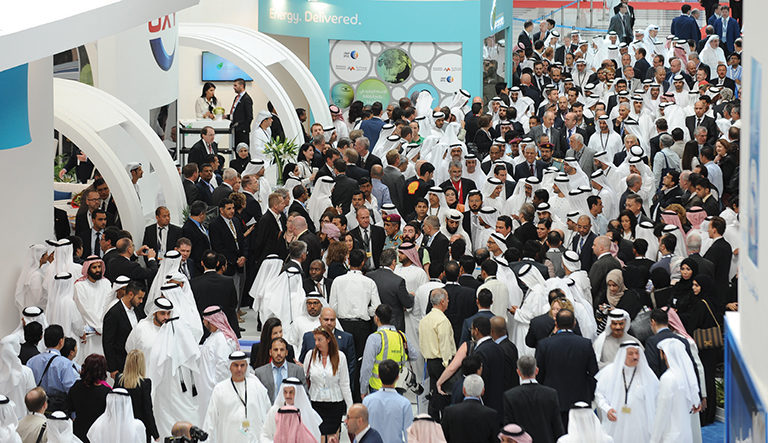 The 2014 ADIPEC attracted 1,868 exhibitors and more than 70,000 attendees. Organizers said an estimated USD 8.5 billion worth of business was generated during the event.

The decline in oil prices will not affect the long-term strategy of national oil companies in the Middle East, ministers and senior executives said at the opening of the 30th edition of Abu Dhabi International Petroleum Exhibition and Conference (ADIPEC) held in November.

Speaking during the ministerial panel session, UAE Minister of Energy Suhail Al Mazrouei said oil producers are not panicking about the decline in prices. Abdalla El-Badri, the OPEC secretary general, was optimistic about future oil prices. “Please don’t panic; things will fix themselves,” he said. The same view was shared by Ali Al Omair, Kuwait’s oil minister, who said that oil prices will rise again.

“The recent oil price decline has put the industry in the spotlight,” he said. “But despite this decline, all our projects are on track without any delay. In fact, we are expecting the startup of various oil and gas projects that will increase our output, including the Shah gas field, which will boost our gas output by almost 1 Bscf/D.”

In addition to the Shah gas field, operated by Al Hosn Gas, the Abu Dhabi Company for Onshore Oil Operations (ADCO) is set to invest a further USD 5 billion to USD 7 billion to meet its production target of 1.8 million BOPD by the end of 2017. ADCO, which operates the onshore oil fields that are responsible for about 40% of the country’s output of 2.85 million BOPD, said the commitment to pump more oil will help the UAE meet its target to increase capacity to 3.5 million BOPD by 2017.

ADCO currently has a capacity of 1.613 million BOPD and invested about USD 5 billion in the first phase of the expansion program through the end of 2012, increasing production by 225,000 BOPD.

“The ever-increasing need for sustainable energy sources must be balanced with dedication to issues of health, safety, and the field of eco-awareness, where the UAE continues to make great strides at an international level,” Al Suwaidi said.

Sultan Al Jaber, UAE minister of state and chief executive officer of energy at Mubadala, said during the inaugural session that innovation and technology are keys to the future of the industry. Enhanced oil recovery (EOR) is necessary for meeting the growing demands of an increasing population, he added. “We must innovate to maximize on every body of oil and extend the life of our precious resources,” he said.

Ali Khalifa Al-Shamsi, director of Corporate Planning and Coordination Directorate at ADNOC and conference chairman of ADIPEC 2014, said that during its 30-year history, ADIPEC has grown to be a global event that provides opportunities to showcase the latest regional and global megaprojects and operations.

ADNOC is moving toward an integrated value chain business, he said, building expertise and expanding and upgrading capabilities in both upstream and downstream. “We are embarking on an extensive unconventional resources exploration and appraisal program. ADNOC is collaborating with top international unconventional resources development companies as well as with services companies,” he said.

Speaking at the executive plenary session under the theme of “Challenges and Opportunities for the Next 30 Years—Technology and Sustainability,” Arnaud Breuillac, president of exploration and production at Total, said the current fall in oil prices is unlikely to last, but if it does, it will create problems.

“For 4 years, the price was relatively stable. Our industry is plagued by boom-and-bust cycles. Mid- to long-term, a USD 80/bbl price will be a bit low to guarantee supply. But it will then rise,” he said. “We don’t want to cut back on investment. We will continue with capital discipline. We have a road map with many ongoing projects.”

Breuillac said oil and gas will remain by far the main source of the world’s energy supply, and 25% of total energy demand will be for gas. “Demand for gas will increase by an average of 2% per year driven mainly by increasing demand from Asia, while demand on renewables will multiply by seven by 2030,” he said.

Although resources are abundant and exist, either conventional or unconventional, the main question is whether the industry will be able to develop these resources reliably and at the right time, he said. “Technological innovation is a key to address this issue, but technology comes with a price,” he said.

As oil prices decline, cost management is a key challenge, and the oil and gas industry needs to focus more on this issue, Breuillac said.

Andy Brown, director of upstream international at Royal Dutch Shell, said, “We in the industry have been slow to adapt while the projects have become much more complex and larger.”

Choong Heum Park, CEO of Samsung Engineering, said that the majority of huge oil and gas projects around the world are underperforming. “In the Middle East region, 89% of megaprojects are facing delays,” he said. “We have megaprojects now with the kind of complexity that is unprecedented, and with much shorter delivery times, from 29 months to 24 months just in the last 3 years,” Park said.

He said that automation in exploration, production, and construction processes will help. “While the demands of the oil companies have become dramatically more challenging, the engineering firms have not changed their methods sufficiently,” he said. “We need to develop better tools.”

Contractors are also pushing for a different approach to bidding so that competition for business does not lead to cost overruns and delays.

In the past 10 years, total exploration and production (E&P) capital spending has grown by more than 300% while global oil production has increased by 12%. And in the past 3 years, the upstream E&P industry has spent on average USD 650 billion/year and the only part of the oil production base that has grown is liquids production from North American unconventional plays.

Paal Kibsgaard, chief executive officer of Schlumberger, said the industry needs to challenge itself. “Together with the E&P companies, we are collectively responsible for the performance progress within our industry and, in this context, I would like to offer our view of what the service industry can do better,” he said. “In short, we believe that we in the service industry need to challenge ourselves and focus on creating a step-change in our technical performance, thereby creating value that can be shared with our customers.

“We have to move from being a hardware-focused industry to becoming more of a software-focused one,” Kibsgaard said.

Rainer Seele, chairman of the board of directors of Wintershall, said new challenges facing the industry will be difficult to overcome alone. “That’s why collaboration between oil and gas players is a key to overcoming this challenge and the other challenges associated with it,” he said.

Oil and gas companies in the Middle East should accelerate research and development (R&D) efforts, according to panelists at another session during the conference. As most of the “easy oil” has been discovered, and the task of producing and recovering more hydrocarbons is becoming harder, the industry needs to boost investment in R&D even in the face of lower oil prices.

Producing future barrels will require tackling complex technological, environmental, and economic issues. “The industry needs to contribute to the delivery of supply to meet the energy demand, as well as develop additional reserves. This requires the development of new technologies as well as better EOR methods for carbonate reservoirs with an innovative process to increase the recovery factor up to at least 70%,” said Mark Michel Durandeau, senior vice president research and development at the Petroleum Institute in Abu Dhabi.

Durandeau also said the industry needs to select the right business model and spread knowledge sharing with other partners.

Meanwhile, Abdulaziz Al-Kaabi, chief technologist of reservoir engineering technology at Saudi Aramco’s EXPEC Advanced Research Center, said that achieving higher EOR recovery rates is a key objective for oil and gas R&D centers, which could be hampered if oil prices slump. “Water injection is not enough, and the world average primary and secondary recovery factor remain low at less than 50% at best,” said Al-Kaabi, “That’s why there is an increased interest in EOR R&D with a strategic objective to come up with a higher recovery factor.”

Demos Pafitis, vice president of engineering, manufacturing, and commercial product sustaining at Schlumberger, said that oil and gas companies do not necessarily want to develop products, but they do need advanced capabilities and expertise. “R&D can help foster these capabilities,” he said.

Pafitis said that services providers are expected to deliver new products, services, and expertise. “We focus on new features and capabilities to address new basin challenges, and lowering cost and improving quality and reliability,” he said.

Managing R&D activities requires a short-term and a long view such as protecting the platform of knowledge, and building new ones and opportunistic initiatives. “Not all great ideas become great products,” Pafitis said.

New technology is needed, but the question is how to accelerate its emergence, said Olivier Cleret de Langavant, senior vice president of E&P strategy, business development, and R&D at Total. “We should define our priorities, what to develop, and what to buy, what R&D collaborative model,” he said.

Langavant urged the industry community to be open and to share technological challenges with outsiders. “We need to share data with R&D partners, build innovative collaboration models, understanding expectations of R&D partners,” he said. “We also need to take risk with newcomers in our R&D community and looking around us for what is happening.”