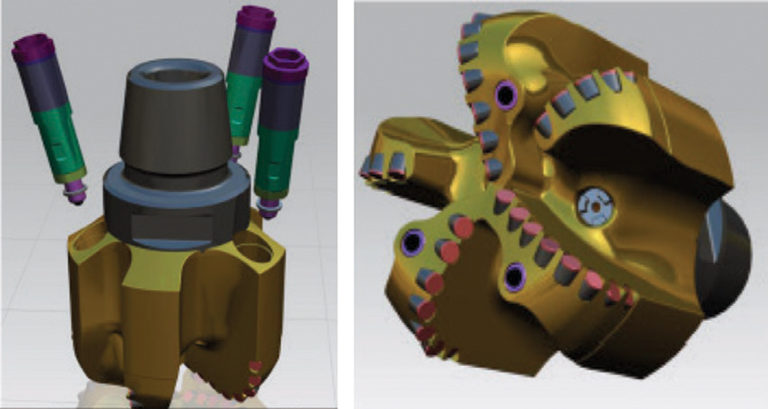 Baker Hughes is developing a drill bit capable of auto-adjusting its depth-of-cut (DOC) feature to handle dynamic drilling conditions. In what may be a first-of-its-kind technology, it is designed to enhance polycrystalline diamond compact (PDC) bits, and the company expects it will generate value by delaying bit damage and increasing overall rate of penetration (ROP).

In addition to the above benefits, Baker Hughes also believes the self-adjusting PDC bit will advance automated drilling efforts and enable harder-to-drill well sections to be drilled in a single run vs. the two or three they may require today.

The company has tested the bit in research wells and is now looking for partners to see how the technology will work in the real world.

The crux of the system involves three “hydromechanical feedback” mechanisms that are installed inside the PDC bit blades. Each mechanism has a piston-cylinder filled with hydraulic fluid that is contained in a removable cartridge. At the business end are egg-shaped ­diamond elements called “ovoids” that provide the DOC ability.

As the bit’s response to the formation changes, the mechanisms act like shock absorbers to ensure the optimal weight on bit (WOB)—the force applied from the surface to drive the bit into the rock—is being used. The system does not use electronic sensors or wired drillpipe and is not actively controlled by the driller.

“That’s the strength of this concept—because introducing electronics increases the cost and also affects the reliability,” said Jayesh Jain, a research engineer at Baker Hughes who helped design the new bit.

Known for enhancing drilling stability and efficiency, DOC control is considered to be a technology breakthrough in its own right. However, traditional DOC controllers are fixed in place and usually tailored to a specific rock hardness, which may require the bit to be replaced as drilling moves deeper.

To figure out how and when the controllers on its new bit should move, Baker Hughes turned to computer modeling and historical drilling data. As drilling initiates, or restarts after a drillpipe connection, the mechanisms fully extend the DOC controllers to help stabilize the bit as it starts turning.

Explaining why such adaptability is important, Jain said, “Rapid changes in the contact forces with the formation over a few seconds indicate unintended changes in depth-of-cut that are typically encountered during harmful events, such as drilling vibrations. So this mechanism senses these changes, and essentially absorbs part of the load.”

Among those harmful events the technology is seeking to mitigate most is stick/slip, which happens when the bit becomes momentarily stuck but the drillstring continues to twist above it. It is a problem encountered both onshore and offshore and aside from the damage it may cause to the bit, stick/slip can generate vibrations along the drillstring that may cause expensive bottomhole assemblies to fail and lead to additional losses from downtime.

During testing, the self-adjusting bit was able to achieve a ROP of 90 ft/hr without stick/slip occurring, whereas the fixed-bit encountered a stick/slip event when the ROP reached 34 ft/hr.

The tests, details of which were presented in an SPE paper at the 2016 IADC/SPE Drilling Conference and Exhibition, demonstrate one of the key selling points for Baker Hughes: self-adjusting bit technology is capable of achieving a higher ROP by allowing drillers to use more WOB.