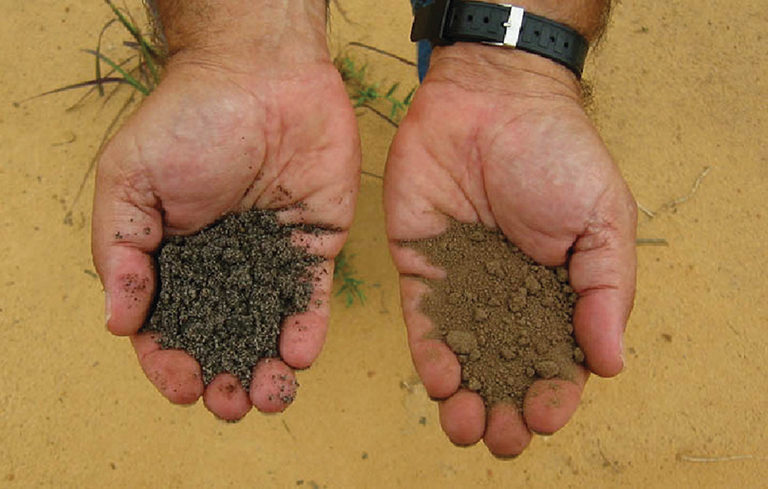 Photo courtesy of MCW Energy Group.
In a new solvent-based extraction technology, oil sands, left, are stripped of the hydrocarbons and turned into clean and reusable sand at the end of the production train.

In the northeastern desert of Utah, a new type of oil sands extraction technology has been born. The company behind it claims the process is the most cost-effective and environmentally sound way to develop oil sands.

“Nothing goes out onto the ground, nothing goes up into the air, and there is no water involved,” said Gerald Bailey, the chief executive officer of MCW Energy Group. “We finish up with 99.9% clean sand that you can just lay out on the ground.”

Bailey said the efficiency of the technology is backed up by permits issued by the US Environmental Protection Agency allowing MCW to reintroduce the sands to the source area. Oil sands surface mining has become a controversial extraction method because it results in large quantities of hydrocarbon and chemical-laced tailing ponds that can take decades to remediate. Another method, steam-assisted gravity drainage, does not come with the environmental drawbacks of surface mining but it does require large volumes of water and energy, usually from natural gas, to generate steam for the in-situ production process.

The key to the emerging technology is MCW’s solvent that acts as a surfactant. Made from a strain of common organic alcohols, Bailey said the solvent strips more than 99% of the hydrocarbons from the oil sands, which have an original content of 12% oil. The quality of Utah’s oil sands is approximately 22 °API, considered the upper limit of heavy oil by the US Energy Information Administration.

MCW also said its extraction technology requires no water for the process, emits no greenhouse gases, and does not require high pressures or temperatures to separate the hydrocarbons from the oil sands. The process is continuous but it can be turned off and on with the flick of a switch. “There is no decline curve. It is not a well depletes,” Bailey said. “You are just taking a raw material, putting it in a chemical, and getting oil.”

The company is currently raising USD 80 million to build a 5,000 B/D facility with two 2,500 B/D contact towers and separation units. Located 5 miles from the pilot facility, the company is buying a 3,000-acre oil sands lease for USD 10 million for a new facility, which would eliminate hauling costs. The prospective area contains 70 million bbl in proven reserves, Bailey said, adding that he hopes to break ground in the first quarter of the year and have the facility achieve first oil in 2016.

Companies have tried for years to profit off the abundant oil sands in Utah, where an estimated 55% of the total US deposits are found, according to the Utah Mining Association, but with little success. The owners of the lease that MCW is looking to acquire use the oil sands as an asphalt feedstock for paving roads. Bailey said the accumulation of large piles of the feedstock will mean that the company will not have to mine it out for some time. Utah’s oil sands run as deep as 300 ft.

Bailey, who holds a doctorate in chemistry and spent much of his 52-year career in the oil and gas industry as the president of Exxon Arabian Gulf, said he took the helm of MCW about 3 years ago after realizing the potential of the technology that the company had acquired. Its core business has been distributing gasoline to gas stations in southern California, but that business is now being spun off so the company can focus on its future in oil sands, he said.

The solvent was invented in Russia by a scientist looking for ways to clean up oil-polluted soil on the outskirts of Moscow. When Russian companies took a pass on the remediation technology, the rights and patents were sold to Glendale, California-based MCW. Bailey said the composition of solvent was altered to optimize it for the Utah oil sands, which differ from Canada’s oil sands in that they are hydrocarbon wet as opposed to water wet.

The extraction method begins with the scooping up of oil sands from the surface using a front-loader tractor that loads the oil sands into a truck. The sands are delivered to the facility and placed onto a conveyer belt and fed into what MCW calls a contact tower.

The oil sands are then heated into a slurry at a temperature of approximately 130°F and introduced to the solvent. With the help of a mechanical agitator, the oil is released from the sand and placed into a separation tank. About 95% of the solvent is separated and recycled into the system and the rest is left in the oil to facilitate its transportation to refineries.

The production cost per bbl is around USD 38, which includes trucking in the oil sands and USD 3 per bbl of the solvent. MCW’s current oil sands lease has an estimated 50 million bbl of oil reserves.

In an ironic twist, some of the newfound interest in the technology has come from Russia. And it has also sparked interest in China, believed to have the most oil sands in the world, along with a host of other oil sands-bearing nations including Canada, Kazakhstan, the Dominican Republic, Trinidad, and Namibia. If coupled with a crushing stage, the technology could also be used to process oil shale.

Bailey believes that the technology can also be used to clean up tailing ponds, which contain leftover hydrocarbons, in Canada. “We could dewater a lot of that stuff and treat it with our chemical and our process,” he said.

With only one pilot plant in operation, Bailey said that MCW is unable yet to export the nascent technology to so many places at once. Nonetheless, he said the technology is scalable. “It is like a Lego set,” he said. “You just build more towers.”