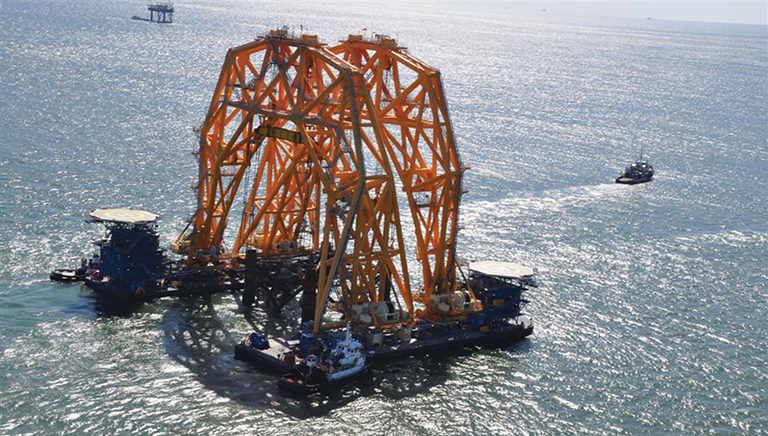 Photo courtesy of Louisiana Department of Wildlife and Fisheries.
A Versabar VB 10,000 lifting vessel deploys decommissioned jacket rigs as artificial reefs in the US Gulf of Mexico, off the coast of Louisiana.

As decommissioning costs mount in the US Gulf of Mexico, the Bureau of Ocean Energy Management (BOEM) is looking to change financial requirements for lessees and operators in federal waters for the first time in more than 20 years. While all lessees will be asked to show that they can cover the cost of plugging wells and removing other infrastructure, smaller operators are likely to feel the effect most.

From the regulator perspective, the main threat to taxpayers is bankruptcy of companies with wells and facilities in federal waters, said Joshua Joyce, a BOEM bond expert who spoke at the Houston Association of Professional Landmen’s November 2014 Offshore Seminar.

At issue are financial standards used to review whether companies have the money on hand for the decommissioning of offshore facilities, as required under US lease rules. BOEM uses a financial test to determine if a lessee has the resources in hand for self-insurance, or needs to turn to a third party and secure extra bonding, which can require operators to put up collateral, often in the form of cash. Its figures show that approximately 90% of leases in federal waters are self-insured. BOEM’s goal is to prevent more vulnerable companies from leaving behind obligations for US taxpayers.

In these situations, the US government assigns the decommissioning duties to the next responsible party. If no eligible party can be found, BOEM will be responsible for decommissioning, although that has never happened. Since 1984, there have been more than 100 bankruptcies of Outer Continental Shelf (OCS) entities, according to BOEM. Eight of them are currently in some stage of bankruptcy. ATP Oil and Gas Corporation, which went bankrupt in 2012, is one of the most recent high-profile examples.

On 19 August 2014, BOEM released what is so far the only official documentation of these changes—an advance notice of proposed rulemaking (ANPR). It asked industry members and stakeholders to answer all or any of its 54 questions about federal bonding and decommissioning rules and their opinions on how these rules might be modified.

Although the comment period for the ANPR has ended, BOEM promised to hold at least one industry workshop in New Orleans this year, and may follow with others elsewhere. John Filostrat II, public affairs representative of the GOM region at BOEM, said it is too early to tell when the new regulations will be ready.

The long questionnaire ­suggests that changes could be extensive. One question asks if the bureau should monitor transactions more closely, and ­another asks, “Should BOEM continue to allow self-insurance for those companies who demonstrate the requisite financial strength, or should BOEM eliminate self-insurance?”

Other questions suggest more flexibility on the part of regulators. For example, BOEM asks if it should tailor financial assurance requirements to each company on a case-by-case basis, which could result in alternative funding methods. Another question suggests the possibility of setting up decommissioning trusts that could be funded by an operator’s production.

Joyce said the agency is engaged in an informal version of this process with an unnamed company, which lost its supplemental bond waiver and was trying to regain compliance with BOEM. One reason he gave for the agency’s interest in alternatives is that the private indemnity market may not be able to write enough surety bonds in the future to support the level of activity in important OCS regions like the Gulf of Mexico.