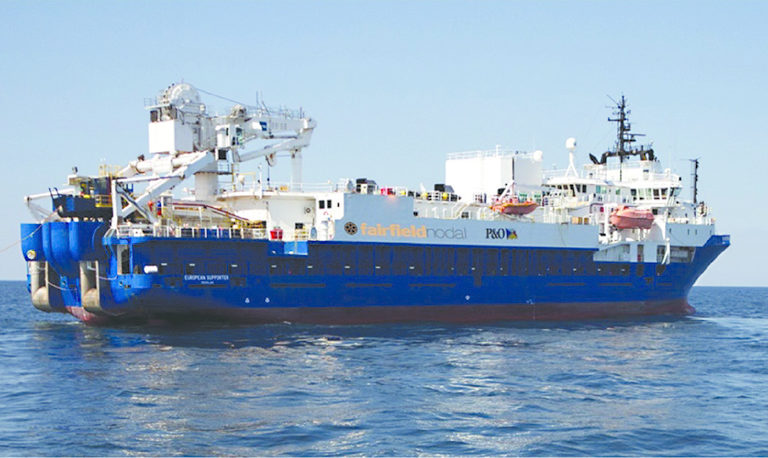 The offshore application of blended, or simultaneous-source, seismic acquisition has been comparatively limited. For ocean-bottom seismic (OBS) applications, survey durations can be almost halved with a modest increase in costs by firing more than one source into the receiver spread simultaneously. In this paper, the authors describe the acquisition of what is believed to be the world’s largest ocean-bottom survey—more than 2200 km2—by use of two blended sources and a very large receiver spread.

Blended, or simultaneous, sources have been introduced recently in land seismic operations, with dramatic improvements in both crew productivity and data quality. Their application offshore, however, has been relatively limited. For towed-streamer surveys, the firing of more than one source at a time increases the fold of coverage and hence data quality but does not reduce acquisition time; for OBS, however, the use of two or more blended sources can have a dramatic impact on survey duration and hence cost. The challenge has been how to ensure not only that data quality is not lost when multiple sources are fired at once but also that technical downtime of the equipment on the seafloor is minimized.

Traditionally, the performance of OBS systems has been hampered by the inherent technical downtime experienced by all contractors operating ocean-bottom systems; the terminations, connectors, power distribution, and data-telemetry components within a traditional ocean-bottom-cable (OBC) system are inherently prone to failure because of the intrinsic nature of the cable-deployment-and-recovery cycle, during which the cables are stressed and destressed every time they are laid onto or recovered from the seabed. It is akin to recovering the full streamer spread at every line change for towed-streamer operations.

The desire to improve operational performance was the driving force behind the development of autonomous nodal systems, and the extreme reliability of these systems has allowed ever-larger seafloor spreads to be operated, with multiple benefits.

This article, written by JPT Technology Editor Chris Carpenter, contains highlights of paper OTC 25226, “Blended-Source Ocean-Bottom Seismic Acquisition,” by C.D.T. Walker, FairfieldNodal; D.J. Monk, Apache Corporation; and D.B. Hays, FairfieldNodal, prepared for the 2014 Offshore Technology Conference, Houston, 5–8 May. The paper has not been peer reviewed. Copyright 2014 Offshore Technology Conference. Reproduced by permission.
...
This article is reserved for SPE members and JPT subscribers.
If you would like to continue reading,
please Sign In, JOIN SPE or Subscribe to JPT