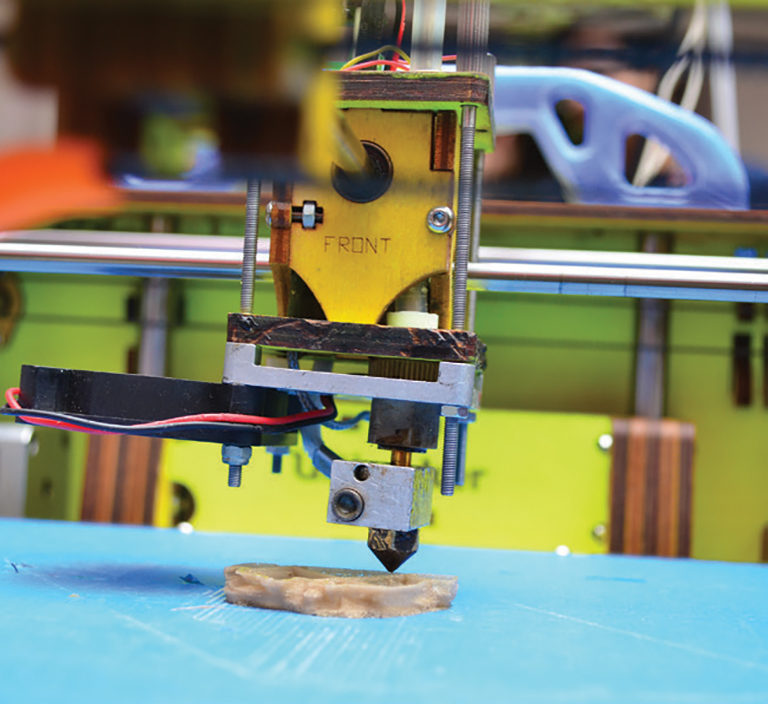 Source: Subhashish Panigrahi/WikiMedia.
One of the best ways to understand a rock may be to simply print it.

Researchers at Heriot-Watt University in Edinburgh, Scotland, are building replica core samples using 3D printers and installing sensors inside them as they go. Their goal is to directly monitor pore-scale flow behavior from the inside of these so-called “smart rocks.”

The project was intriguing enough to be awarded a 5-year, EUR 3-million grant by the EU’s research and innovation program. Out of 1,900 applicants this year, only 16 proposals were given the funding.

Mercedes Maroto-Valer, a professor and director of the university’s Energy Academy, is leading the project, which began by looking for new techniques that could push the boundaries of what scientists know about how fluids flow through reservoir rocks. She said that to her knowledge, no one has ever tried this approach before.

“I think our unique angle here is that we are able to bring the expertise from manufacturing, sensor technologies, and petroleum engineering all together for this project,” she said.

The plan is to 3D print 1-in. ­diameter true-to-scale core samples and install the sensors during the process in ­places where they will not interfere with the porous areas researchers want to monitor. “If I am able to have sensors embedded within them, then I will be able to get real-time data on what happens within the structure,” Maroto-Valer explained. “And of course because I am printing the structure, I can have full control over how I want that structure to look.”

Studying how fluids and hydrocarbons flow through such small samples has become a hot area in petroleum science because the controlling microforces are linked to the macroforces that control production at the reservoir scale. And as the global industry taps into more complex formations found both onshore and offshore, such fine-grained details matter more than ever.

The data collected from the flow experiments will be used to build more accurate computer models, which may help engineers design better approaches to completing horizontal shale wells or enhanced oil recovery in brownfields.

Maroto-Valer said the focus for now is on testing different sensors and materials such as polymers, glass, and metal to see which will come closest to replicating both conventional and unconventional geologies. They are also planning on embedding calcite inside the cores to mimic real-world formation conditions.

This video provides highlights of 3D printing of reservoir rocks: