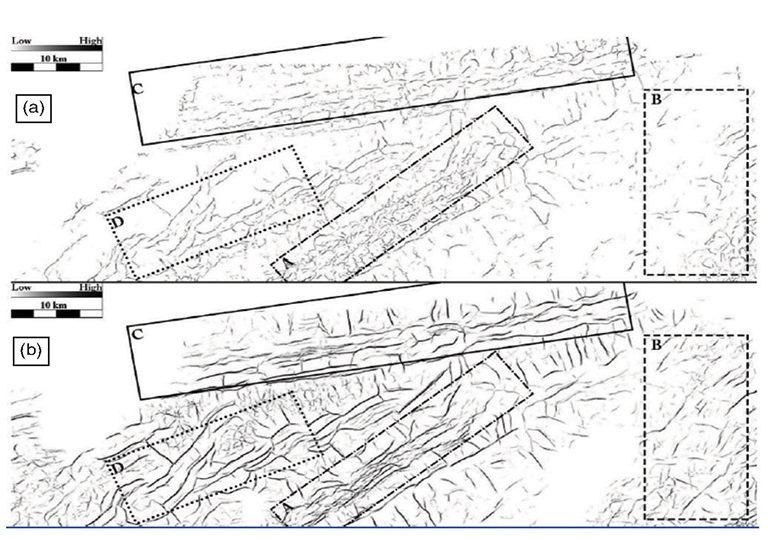 Source: Interpretation.
Improved imaging using a traditional workflow, above, and spectral similarity below. Darker lines indicate a higher likelihood that a feature is present.

The tedium of identifying small faults in often murky seismic images pushed Dustin Dewett, an associate geophysicist for BHP Billiton, to develop a better way to use the tools at hand. The method, which he calls spectral similarity, combines software used by large oil companies in a novel way to create clearer, more accurate images of faults.

The result makes a “time-­consuming and tedious task that is punctuated by moments of complexity and difficulty” easier and more useful, according to a technical paper describing the ­method published in Interpretation (February 2016), a journal jointly published by the American Association of Petroleum Geologists and the Society of Exploration Geophysicists.

The motivation came from a 3-month assignment, working with a geologist to describe hundreds of faults from a sample of an unconventional formation where the company was planning a pilot project. As a geophysicist, Dewett was familiar with what others had done to improve fault imaging, and thought he could adapt those tools to automate this manual process.

The method “increases the efficiency of fault interpretation several times over traditional human-based fault extraction techniques” by offering a  more accurate picture of the shape and orientation of the faults. It can offer clues about stress fields that affect hydraulic fracturing.

And in offshore formations, where thick salt layers can obscure faults that could drastically reduce production, it can highlight features that might otherwise be missed.

“This is good progress,” said Kurt ­Marfurt, a professor of geophysics at the University of Oklahoma, who made several contributions to enhancing fault imaging. He added that Dewett’s workflow “is the state of the art of where we are as an industry.”

Seismic interpreters are paid to do what computers are not good at: observe patterns and note where they change. For example, a person can easily see where a scar interrupts a fingerprint. Computers, however, cannot because they observe “point by point,” with little awareness of changes nearby, Marfurt said.

The traditional tool used by interpreters was a pencil, used to draw faults suggested by seismic images based on their knowledge and experience, and also remove breaks or bends in fault images that are not found in nature.“

In the Eagle Ford, we will have hundreds if not thousands of faults to interpret. Each one (project) would take weeks of time and is somewhat subjective,” Marfurt said.

Faced with the prospect of months spent seeking out faults this way, Dewett focused on getting a computer to do the heavy lifting. Others have created processing methods and tools to enhance fault images using a slice of the seismic signal called seismic attributes, but the quality of the resulting enhanced images still required a lot of judgment calls by interpreters.

Fault enhancement programs sort the data used to identify abrupt changes due to a fault, where two rock faces have been displaced. Some of them use image-enhancement methods such as the ones in photo editing software, while others use swarm intelligence programs that mimic the behavior of social insects such as ants.

Previous methods struggled to eliminate the distortion caused by noise in the data. “There is a lot of extraneous stuff in there. It is not what an interpreter would interpret as a fracture,” Dewett said.

More than 2½ months into the job, though, Dewett had not yet figured out how to solve that problem. When his boss asked for a progress report, he had to say that “this was taking a while.”

Fortunately, progress accelerated from there. “After that meeting, within 2 weeks I figured it out, and finished the interpretation of more than 300 faults,” said Dewett.

The results were checked by his partner on the interpretation project, Alissa Henza, an experienced structural geologist who accepted 33% of them without change. On the rest she made “minor edits” in details, often splitting one fault into two, the paper said.

The images showing smaller details, such as faults in which the movement across two rock faces (the offset) is as little as 10 m, can help asset teams determine where best to locate a wellbore, and how local stresses are likely to affect hydraulic fracturing.

The method is being used within BHP Billiton by groups managing conventional and unconventional assets for interpretation, and the improved images are used to explain formation analysis to those drilling and completing wells, he said.

Other companies are evaluating the method. Dewett said he regularly receives emails from people in the industry with questions about how to apply the workflow described in the paper, which did not offer the names or makers of the software used.