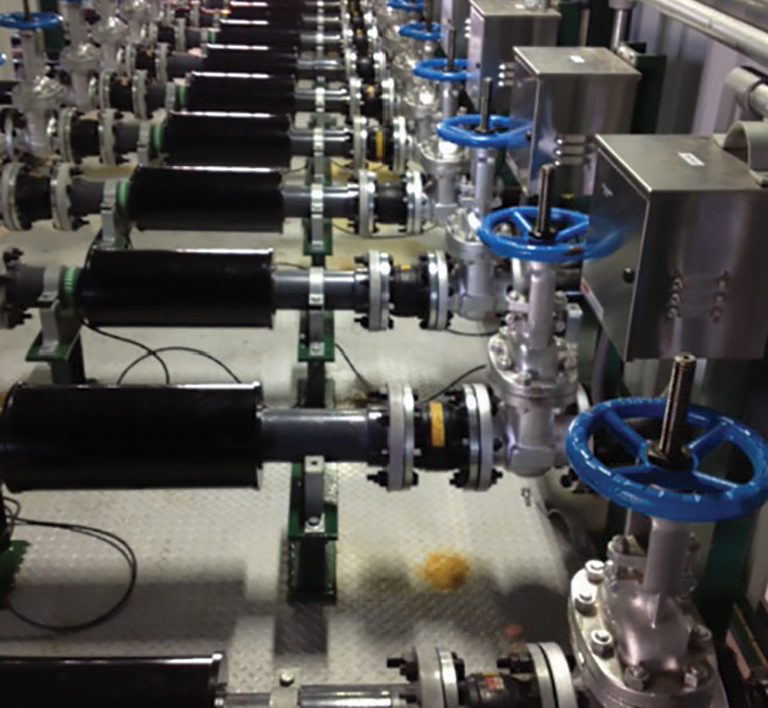 Source: MBL Industries.
A look inside the positive ion generators that introduce charged particles into fracturing water. The company behind the innovation is looking to field test the unit in the Eagle Ford Shale of Texas.

A long-time energy industry executive and chemical engineer has built a new water treatment system that he says can increase recovery rates from shale wells without using chemicals and will recycle all the water used in the process.

“The trick is to use a high concentration of positive ions—it changes the characteristics of the shale,” said Joe Munisteri, founder and president of MBL Industries.

He explained that his electromagnetic technology will flood fracturing water with an excess of positively charged particles and selectively trigger a reaction with the shale’s calcite minerals—transforming them into a much more brittle mineral called aragonite. Munisteri believes this altered state will open up calcite-sealed natural fractures and other pathways to allow oil and gas to flow freely.

MBL is seeking pilot opportunities and is in talks with an independent producer that operates in the Eagle Ford Shale of Texas to test its novel hydraulic fracturing system on two wells: one that is depleted and one that is drilled but uncompleted.

The inspiration for Munisteri’s innovation came from the more than 40 years he spent working on projects involving charged particles. He has studied using them to improve pipeline welds and was given top secret clearance during his time as a liaison to the executive committee of Halliburton in the late 1970s to study a US military application that intended to shoot nuclear missiles down with beams of positive ions.

Munisteri went on to invent a positive ion descaling and anticorrosion system. He started a company that sold more than 5,000 units to operators of industrial cooling towers and boilers. Then about 4 years ago he realized there was a new and wholly untapped application for this type of technology so he founded his next venture, MBL, and drew on his past expertise to bring it to life.

“Positive ions destroy microorganisms without chemicals, coat steel with a corrosion inhibitor material like Cor-ten, and at the same time they convert the carbonates from calcite into aragonites,” he explained. “So I said, ‘Why don’t we use this in fracking?’”

The metamorphic conversion of calcite to aragonite, and vice versa, is probably more familiar to geologists and marine biologists than petroleum engineers.

Seashells and coral are made of these two polymorph minerals, which mean they share the same chemical makeup, yet aragonite’s crystallized structure is fragile by comparison. The prehistoric seas were dominated by aragonite-based marine life but time and heat converted much of the aragonite into calcite.

Positive ions are known to undo this process almost upon contact. Munisteri compared it with what one would observe when acid is used to dissolve limestone—a sedimentary rock comprising calcite and aragonite.

Under MBL’s stimulation plan, once a fracture is initiated the positive ions will be delivered into the formation en masse. When flowback begins a short time after, bottomhole pressure will take over and push the brittle aragonite out of the formation along with other constituents such as quartz or sand that may also be dislodged.

Munisteri said it is reasonable to assume that this will create flow paths and open up calcite-sealed natural fractures that may double the average recovery rate from shale, which many estimate to be between 5–7%. He sees the potential for widespread use of this technology considering that calcite is a dominant mineral found in the major shale plays of North America.

Others have studied the potential of this ionized approach but Munisteri said his technology generates electromagnetic frequencies about 100 times more powerful than the previous work.

To get the job done, MBL built a self-contained system capable of treating and reusing 7 million gallons of water a day—potentially enough for two horizontal wells. It consists of two units, the first of which uses an electromagnetic generator to generate high-density positive ions in the water just before it flows down the well for stimulation.

The second unit uses a multiphase separator to recover the suspended solids and recycle the returning water. “So there is no transportation of water, there are no disposal wells, and there are no chemicals in the water,” Munisteri said. With these cost savings and an uplift in recovery, he added that shale wells could turn profits at prices as low as USD 20/bbl of oil or USD 1/Mcf of gas.

Munisteri also noted that in many shale formations capillary effects are believed to trap as much as 80% of the original fracturing fluids inside the rock. Since the water will retain a large amount of the positive ions for several months, he said calcite that is deeper into the formation will continue to transform into aragonites and this will enhance production over time.

“Now there is an endpoint,” he said. “When you run out of positive ions, all the other calcites are going to combine and recrystallize.” He said by this time, operators should have already reaped the rewards of increased production but if needed, the wells could be restimulated with another batch of ionized fluids.