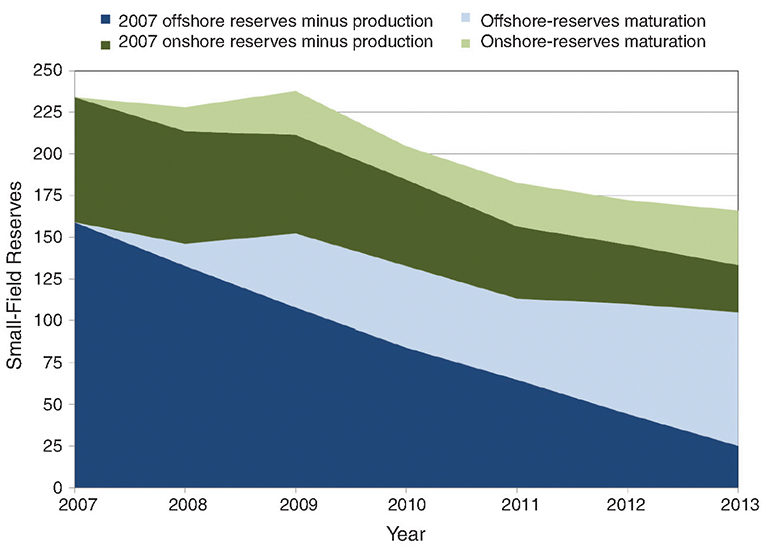 The Petroleum Resources Management System (PRMS) reserves-reporting system was adopted by EBN in 2009. At that time, a new PRMS project database was developed. The implementation of the PRMS has contributed significantly to the understanding of the hydrocarbon-maturation process in the Netherlands. It has proved to be a valuable system for hydrocarbon-maturation analysis and reporting and provides insight within the current and future activities of the Dutch exporation-and-production industry.

The Netherlands is part of the southern North Sea Permian basin. The country counts more than 500 oil and gas fields. Most of the fields are gas bearing; less than 50 fields contain oil. The number of onshore and offshore fields is roughly comparable, although slightly in favor of offshore.

The Dutch hydrocarbon region is considered mature. The production of the small fields is declining. As of 2014, more than 80 fields have ceased production. Approximately two-thirds have reached the tail-end phase of their production life, which is defined as having produced more than 85% of their expected ultimate recovery.

New hydrocarbon accumulations are still being discovered, an average of 10 fields per year over the last 5 years. The annual number of exploration and appraisal wells varies between 10 and 20. The annual amount of production wells (infill and development) varies between 20 and 40. In the Netherlands, the overall investments have remained fairly stable since 2005. A total of EUR 1 billion to 1.2 billion per year is spent on the exploration and development of small fields.

This article, written by Special Publications Editor Adam Wilson, contains highlights of paper SPE 170885, “The Value Added After 5 Years of SPE-PRMS,” by Eric Kreft, SPE, Raymond Godderij, SPE, and Berend Scheffers, SPE, EBN, prepared for the 2014 SPE Annual Technical Conference and Exhibition, Amsterdam, The Netherlands, 27–29 October. The paper has not been peer reviewed.
...
This article is reserved for SPE members and JPT subscribers.
If you would like to continue reading,
please Sign In, JOIN SPE or Subscribe to JPT