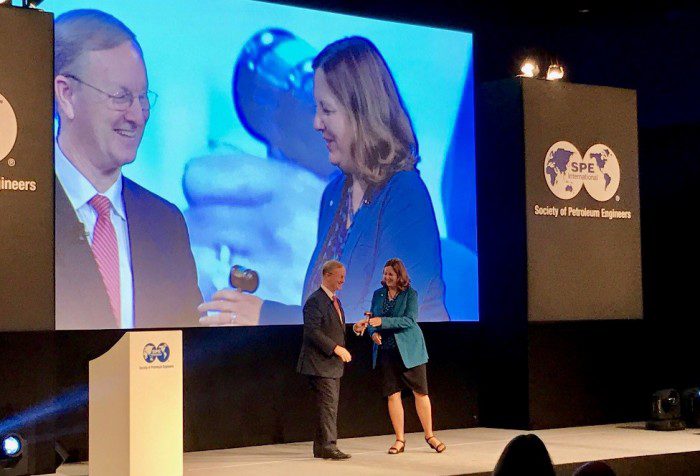 The final day of the SPE Annual Technology Conference and Exhibition in Dubai marked the beginning of the leadership term for 2017 SPE President Janeen Judah, the general manager for Chevron’s southern Africa business unit.

Judah assumed the organization’s top position on Wednesday after 40 years of SPE membership. During that time she has served on the Board of Directors as the Vice President of Finance and was also the chair of both the Gulf Coast and Permian Basin Sections.

In her inaugural address to conference attendees, Judah acknowledged the struggles facing the industry but struck a hopeful tone, insisting that the industry will adapt to the reality of this lower-for-longer era.

“Today’s crude prices will force innovations in technology and business models, changing again how oil and gas is produced and developed,” she said. “Ultimately, we see an oil and gas industry that will be stronger, leaner, and built to last.”

Like many of the companies that its members work for, SPE is navigating through challenging financial conditions, which will require some programs to be scaled back. Judah said her primary goal will be to make sure these changes take place with minimal impact to member services.

“While we modernize some of our member offerings, we will stay true to the core reason I believe people get involved in SPE: the personal relationships that we offer,” she said. “Meeting other engineers in person is the way to build business connections, and I think that is a big role that SPE plays for our members.”

Judah will also spend the next year working to promote the development of engineers in developing countries. Governments of many oil-producing nations have called on international operating and service companies to help cultivate local talent, and Judah emphasized that SPE will continue to be part of that effort under her leadership.

And as the first woman SPE president in more than a decade, and the fourth in the history of the organization, Judah promised to be accessible and visible to the women working in this industry.

“I realized many years ago that I am an example for young women engineers—whether I choose to be or not,” she related. “So you might as well step into the role, step into these shoes, and be proud.”

In addition to traveling to local SPE sections around the globe, Judah said she will be actively engaging with members on social media. She plans to continue posting regular blog updates on LinkedIn and will be holding interactive discussions on both Facebook and Twitter.

Handing Judah the ceremonial gavel was outgoing 2016 SPE President Nathan Meehan, a senior executive advisor at Baker Hughes. In his remarks as the outgoing leader, Meehan highlighted how the increased access to fossil fuel energy has helped lift millions of people out of abject poverty. But he also stressed that SPE members must be cognizant of the world’s growing concerns over the environment and climate change.

“Regardless of your beliefs about the role of anthropomorphic greenhouse gases in climate change, we must not ignore our role. We have to be part of the solution and not just be perceived as the problem,” he said.

Noting that while SPE is not an organization with expertise in climatology, Meehan said its members are the only people with the technical know-how and skills to further the progress on critical solutions such as carbon sequestration. He added that he also supports initiatives to completely eliminate flaring around the world and prevent oil spills that threaten the industry’s societal license to operate.

Meehan concluded with an update on SPE membership, which he said in spite of the downturn grew by 24,000 members last year. The total membership figure now stands at around 168,000 members in 144 countries.