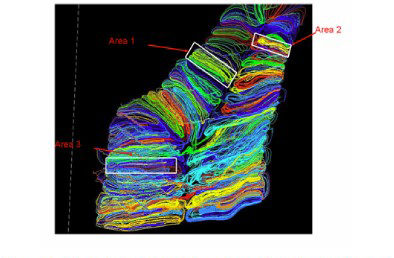 Source: SPE 181729
The colored lines follow the path of waterfloods in a Saudi Arabian oil field. The three areas highlighted were chosen as candidates for the first test of carbon dioxide enhanced oil recovery using alternating water and gas injection.

Saudi Aramco’s first test of using carbon dioxide (CO2) injection to extend the life of a field resulted in a fourfold increase in oil production in the first year.

“The response has been very positive,” said Sunil Kokal, a principal consultant for Aramco on enhanced oil recovery (EOR), who presented a paper on the project (SPE 181729) at the SPE Annual Technical Conference and Exhibition in Dubai. As a result, the water cut dropped significantly from about 98% water produced to 90%.

The jump in production came for a type of EOR where it often takes years to see its full benefit. In this case the injections only lasted for about half the year because of shutdowns for maintenance.

Kokal cautioned that it is too early to judge the results of the pilot project, pointing out that “the next year will be critical.”

The company will be looking for further gains in the production and keeping a close eye on where the CO2 is flowing. It needs to be sure the notoriously hard-to-control gas will continue to flow from the injection wells to the producing wells, and that the gas that does not flow back remains trapped in the ground for the long term. The second is important because Saudi Arabia hopes to be able to reduce its carbon emissions by sequestering CO2 carbon dioxide from industrial operations, in this case a gas processing plant.

Even if the project passes all the technical tests, the economics of carbon dioxide injection would be a barrier to a commercial-scale project. At oil prices less than USD 50/ bbl, Kokal said the high cost of planning, building, and obtaining the gas make “CO2 an expensive beast.”

Work on the pilot program goes back nearly 10 years. Many years of lab testing, well testing, and simulation went into the design, which has four injection wells, four producing wells, and two monitoring wells located in an aging patch within the giant Ghawar Field.

Beginning in July 2015, the wells began alternating between injecting water and then gas. “The CO2 does a good job of sweeping the top of the reservoir where some oil is left,” Kokal said.

The metal components in the system were designed to stand up to the corrosive mix of CO2 and high-salinity water. The metal was chosen with that use in mind, corrosion inhibitor is steadily injected, and the pipes in the producing well are coated with epoxy for protection.

The CO2 is extracted from the exhaust of a gas processing plant, where it is pressurized to 2,200 and run through an 85-km pipeline to the wells. When that liquid (supercritical) gas is pumped into the reservoir, it is miscible with the oil, making it more effective. The high-pressure production steams goes into a new unit that lowers the pressure and separates the gas, water, and oil and sends it into the field’s gas processing system.

Saudi Aramco is looking for ways to use CO2 to add production. Another paper presented during the conference discussing tight gas production mentioned work on energized fracturing with CO2 added to the fluid.

Saudi Arabia’s pledge to reduce its carbon emissions should encourage continued work, but the paper’s introduction said sequestration was the main goal because “Saudi Arabia does not require EOR for decades to come.”