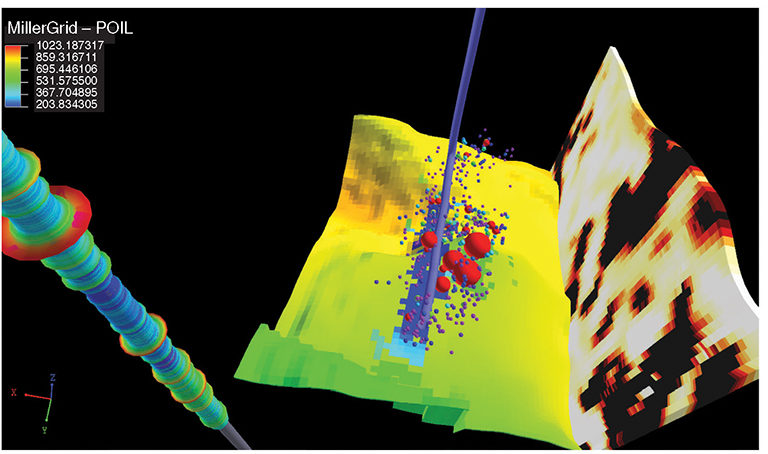 Image courtesy of FracGeo.
A 3D simulation of a horizontal wellbore combined multiple sets of data including seismic, pressure distribution, and microseismic to provide the operator with a better understanding of the geomechanics involved with the completion design. The companies developing these simulations with advanced computer models are hoping that the shale industry begins to take notice of how the technology may improve production results.

Developers of the latest generation of unconventional hydraulic fracturing models are hoping that current weak oil and gas prices will generate newfound interest in their software technology.

After years of rewriting old programs and coming up with new ones, the modelers say they have advanced the industry’s ability to digitally simulate how shale reservoirs react to hydraulic fracturing. If the technology works, they may have overcome the major limitations that have stymied the adoption of fracture modeling since the onset of the North American shale revolution.

Those working on this new front include service company giants such as Schlumberger, which in recent years has built and acquired a number of modeling, simulation, and 3D seismic technologies to capture this budding market. Smaller and much younger startups are also in the hunt, such as Sigma3 and FracGeo, who teamed up in the summer of 2014 to introduce and market new unconventional reservoir models.

Several other players are pushing their own approaches but the concept they all share is that if shale producers can predict what subsurface properties dictate a quality completion, they can land wells in geologically and geomechanically favorable sweet spots and spend their capital on initiating fracture stages only in the most likely-to-produce sections of a well. The technology could also reduce the financial pain incurred through time-consuming, trial-and-error pilot programs used to determine a particular field’s best completion practices.

Ultimately, the technological goal is to lower break-even costs and deliver sustainability to the flagging shale business by engineering wells that produce more oil and gas from fewer wells, with fewer fracturing stages.