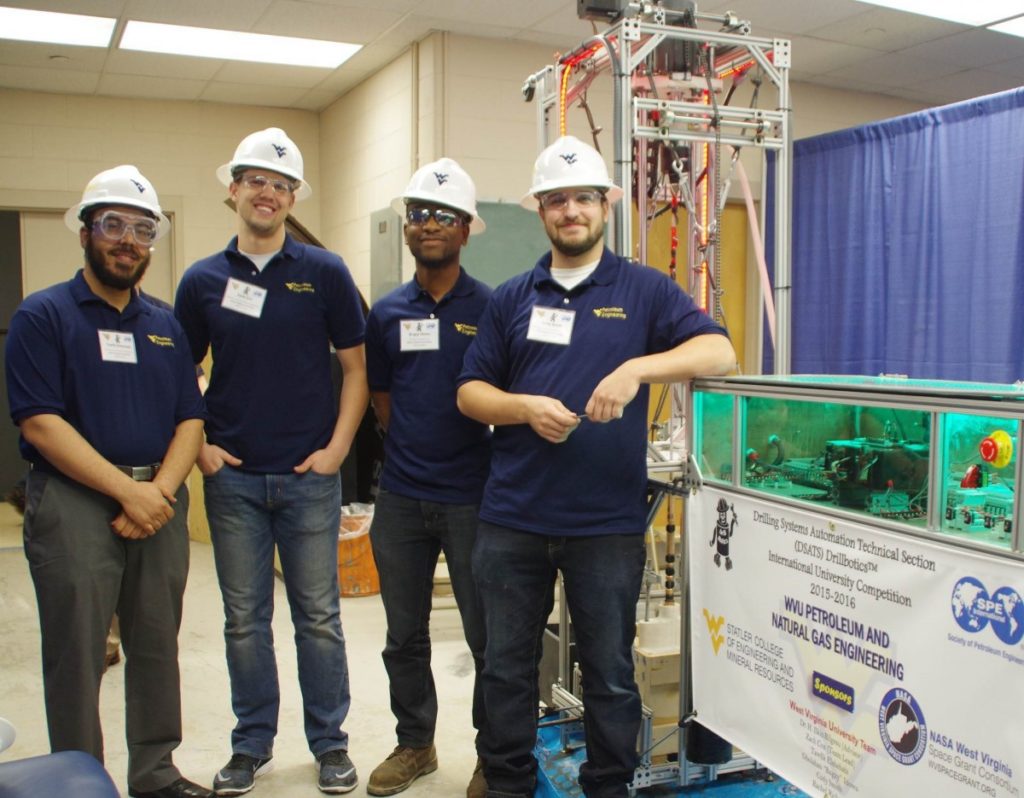 It is possible to build an automated drilling device that quickly reacts to changing conditions with limited money, time, and almost no experience.

The case in point is the group of five students of West Virginia University (WVU) who won this year’s Drillbotics drilling automation challenge put on by SPE’s Drilling Systems Automation Technical Section (DSATS). DSATS held a half-day symposium at SPE’s Annual Technical Conference and Exhibition in Dubai on 25 September, which included a presentation by WVU.

In their spare time during the last school year, including times used for sleeping, the WVU team built a device able to drill a straight hole through multiple rock layers at different angles with openings that sucked up fluid, and did it faster than any of the other five university teams.

Speed mattered, but just as important to the judges was the ability of the control system to adjust to abrupt changes.

“We expected them to throw us off our game. We made own sample with angles, rock layers, with dolomite, sandstone, and foam. We even put a piece of coal,” said Zach Cox, who led the team he helped organize after hearing about the contest at the start of the school year.

They spent less than the USD 10,000 allowed under the contest rules because he said, “we didn’t have it.”

The group, which also included three graduate students—Cody Smith, Tawfik El Shehabi, and Gbolahan “Bugzy” Idowun—and an undergraduate student, Rachel Richard, managed to raise only USD 9,000, which is USD 1,000 less than allowed under the rules.

They raised the funding from several sources within the university and held down costs by doing their own building and wiring, and making cheap components do what more expensive ones would do. For example, rather than buying a programmable logic controller to serve as the brains of the machine, they bought a cheap processing chip with low power requirements (Intel Edison). When it bogged down while running the control program, they augmented its processing power with low-cost control boards (Arduino Uno) that assisted on some functions.

Parts-making development was speeded using 3D printing for rapid prototyping, allowing them to quickly recognize flawed designs and move on to new ones.

The critical piece was the software needed to monitor and adjust to changing conditions during drilling. The budget put this on the list of things to do themselves but this group of engineers did not include anyone with computer science experience. As part of the team effort, Cox learned to program in the C++ language. “We had to approach it simply because it was over our head. None of us are programmers.”

The programming used an algorithm for optimizing physical processes, called simulated annealing, which was used to “find a way to optimize at more than an acceptable rate,” Cox said.

Since there were no preset commands, the team had to pick a method that allowed it to penetrate the rock quickly, which was a top priority, without damaging hardware or drilling faster than the hole could be cleaned out, and to do so fast enough to react to changing conditions.

Along the way they also needed to react to a change in the dimensions of the rock used for testing compared to what they had been told at the beginning, forcing them to change the programming and consider if their framework could handle it, which it could.

On the day of the judging, it did well when things went bad. When the driller lost fluid circulation after hitting openings in the rock, the system was designed with enough added capacity to more than cover for the losses.

They had received clues from the judges to expect faults, and then did a bit of detective work. They weighed the rock they were given for testing and noticed it was light for a rock its size suggesting that there were cavities inside, said Ilkin Bilgesu, the associate professor of petroleum engineering who was the faculty adviser on the project.

More difficult was the failure of a connector holding together the drillstring during drilling, which was actually a good thing.

As they heard the sound of the connector coming apart, they and the judges saw the control system quickly add weight on the bit to keep it turning for a time. They and others in the contest were allowed to replace the broken connector and continue.

Cox said the judges listed the system’s quick reaction time as a plus, as was the straightness of the hole as measured by placement of a dowel into it, Cox said.

And this time they stopped drilling before penetrating the floor. That was important for them because during development, they had continued an inch into the concrete in a lab, which they had to fix