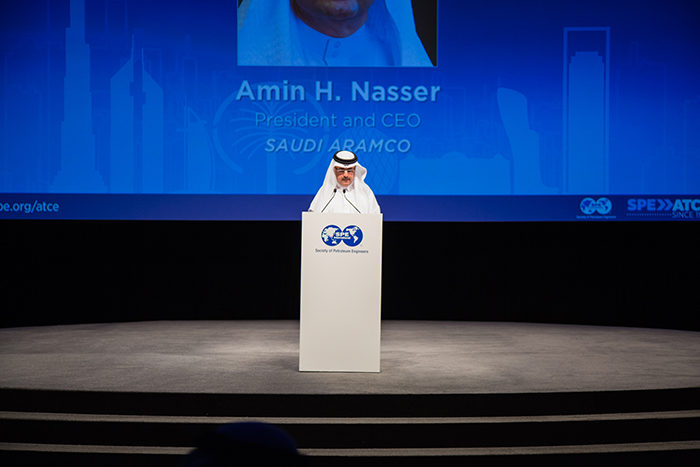 The conference is being held in Dubai, only the third time SPE’s flagship meeting has been held outside of North America in its history.

Both Nasser and Al Kindy struck similar themes about the need for both the industry and their respective state oil companies to change strategy in light of the oil and gas sector’s current economic challenges.

Despite growth in alternative energy sources, hydrocarbons will supply the world’s energy needs for years to come, said Nasser. He said the current oil industry is in recovery mode but still weak. “Despite recent oil price volatility, the market is reaching balance,” but likely will remain volatile in the near term, he said. Firms with both upstream and downstream businesses will remain in better shape, he added.

Nasser laid out Saudi Aramco’s 4-point framework for the future, which has similar applications to the broader industry, he said. The plan focuses on resilience, innovation, managing talent, and collaboration. Noting that many smaller companies have filed for bankruptcy because they were overleveraged, he emphasized that a strong financial position, and diversity beyond just the upstream, will help companies survive in times such as these. It also allows for continued investment in technology and building capable human resources.

Aramco is “pushing the envelope” with additional emphasis on R&D, opening satellite research centers, pursuing venture capital, and putting renewed effort on increasing recovery factors. Despite tough times, “now is the time to reboot our approach to human resources,” he said, including establishing a professional development center, strengthening ties at the university level, and bringing more women into key positions.

Nasser added that SPE could play an important role in encouraging industry collaboration on some of these key issues. SPE “could be a catalyst in helping lead an industry transformation,” which would position the industry for greater success when it comes out of the current economic downturn.

Similarly, ADNOC is rethinking strategy to position itself better for the future. In the past 6 months, the state firm has adopted four pillars that will mark its priorities going forward, said Al Kindy. “We are going to become a smarter, more agile organization,” he said.

He also emphasized the importance of developing staff, adding that the company is committed to developing the next generation of leaders judged on merit and will work to empower women, a neglected human resource in the industry.

ADNOC will focus on four strategic areas, he said: enhancing the company’s performance, increasing profitability, optimizing efficiency, and investing in people. It wants to speed up time from discovery to first production and will invite partners to help it achieve this goal, and will increase R&D in upstream to develop new sources of production.

Nathan Meehan, 2016 SPE President, closed the opening session by noting the visionary leadership in the UAE that has developed many world-class facilities over the past several decades. The oil and gas industry needs similar vision, and its younger leaders must “stand on the shoulders of giants” in able to “see further” and succeed in supplying the world’s energy, no matter the oil price.