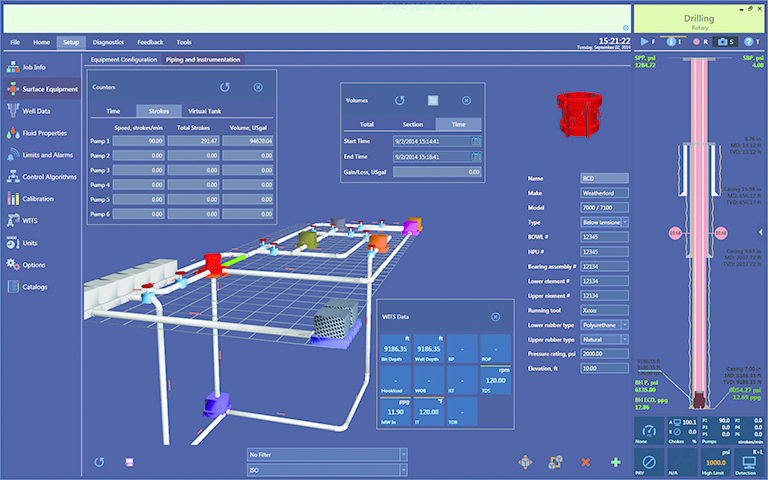 Image courtesy of Weatherford.
Fig. 1—A sample screen shot is used to validate calculated vs. measured friction losses for surface equipment on a deepwater well, right, being drilled with managed-pressure methods.

The second of a two-part series, this article presents an update on several managed-pressure drilling (MPD) technologies in use offshore.

Approximately one-half of all offshore conventional oil and gas resources are known or thought to be undrillable with conventional, open-to-atmosphere circulating fluids systems for safety, economic, and/or technical reasons. In deeper water, pressure on exposed formations created by a tall column of annulus returns in marine risers grossly overbalances many reservoirs, resulting in a higher proportion of undrillable prospects.

Many offshore drilling programs experience a slow rate of penetration and instances of stuck pipe, kicks, and lost circulation, which collectively account for about one-third of all the nonproductive time on drilling projects. As the elapsed time increases, so does the cost per foot drilled and the probability of other things going wrong, creating a temptation for taking short cuts to save time and money. If drilling difficulties lead to the use of excessive casing strings, the result may be reaching total depth with too small a hole for a productive well.

An inherent weakness associated with the hydraulics of conventional circulating fluids systems has become more troublesome. In the face of unexpected downhole pressure environments and wellbore instability, the only way to influence the wellbore pressure profile as drilling progresses is to change the circulating rate (mud pump speed), which influences the equivalent mud weight (EMW). The only means of applying backpressure to increase the wellbore pressure profile is to close the blowout preventer (BOP). Consequently, the primary well-control barrier is limited to the hydrostatic pressure applied to exposed formations.

The root concepts of the hydraulics of conventional drilling were founded in the Spindletop field in Beaumont, Texas, circa 1901. The “Spindletop gushers” were initially a time of celebration. However, resulting wasted resources, fires, and lawsuits prompted a need to drill into the reservoir without experiencing a blowout. The solution was to drill with weighted fluids, literally mud from a cattle pond at the time. Although drilling fluids technology has come a long way, conventional offshore drilling programs still view the hydraulics of the circulating fluids system essentially the same way—and we still commonly refer to drilling fluid as mud.

The root concepts of managed-pressure drilling (MPD) offer an alternative with several variations, each applicable to different types of challenges to conventional drilling methods. They are

This article addresses developments associated with the practice of the CBHP, PMCD, and RFC-HSE variations of MPD on offshore rigs.

A state-of-the-art kit for practicing these variations of MPD incorporates drillstring nonreturn valves, a programmable logic controlled (PLC) automatic choke system, and RCD designs that enable a closed and pressurizable system on all types of offshore rigs. EMW is maintained at a level greater than formation pressure by using a combination of mud weight hydrostatic head pressure, circulating annular friction pressure, and surface backpressure. EMW, rather than hydrostatic head pressure alone, may be viewed as the primary well-control barrier.

Beyond MPD’s namesake of drilling in challenging downhole pressure environments to deeper depths, including wells previously considered “undrillable,” its practical operational capabilities have grown to include an impressive suite of drilling hazard mitigation and optimization techniques. These include

This technology provides better control over the wellbore’s pressure profile and is progressing toward standard procedure on challenging offshore wells in which the need to increase recoverable reserves and operational safety is paramount. This is particularly true in deepwater and ultradeepwater. Nevertheless, the experience to date has identified opportunities to further enhance PLC automated choke system software capabilities.

Weatherford is introducing an enhanced version of the Microflux PLC automated choke system software. The new software platform merges engineering, operations, and reporting in a user-friendly way, enabling increased productivity with enhanced well control. Real-time live well displays of the wellbore and automated data analysis reduce the risk of human error, contributing to the timeliness of well-control and drilling optimization decision making when practicing MPD on complex wells. Onsite and offsite documentation of planned and unexpected occurrences is thereby enhanced.

By employing real-time models such as hydraulic, well control, swab/surge, and drilling optimization torque and drag, the system displays the information from different perspectives and aids in understanding the real operational limits. Where prior systems have focused on drilling hydraulics, this new capability includes kick tolerance calculations updated at will, identification of the weakest link in the circulating fluids system, and suggestion of the most applicable well-control actions.

For example, although early kick detection has been a hallmark capability of drilling with a state-of-the-art MPD kit, the enhanced Microflux software system and the visualization of critical parameters can provide answers to the very important questions that immediately follow detection, including

The system not only identifies events and provides warnings in real time, but it also can run “what if” simulations to predict possible drilling optimization or well-control consequences.

Visualization is an important feature of the new software platform, improving the ability to make timely decisions with minimum effort. Selected measurements, wellsite information transfer specification data, and calculated data are shown, as are time- or depth-based graphs, on live well displays.

Other visualizations enabled are

Taken together, the visualization capabilities help the user to understand more fully what is happening in the well. Views can also be customized, including 2D, 3D, and zooming options.

In addition, surface equipment visuals such as the screen shot shown in Fig. 1 above are provided to simplify routine tasks such as inputting the system setup information and entering maintenance records and notices of approaching limitations of equipment. Piping and instrument drawings illustrate actual surface equipment configurations and specifications. Related calculations, such as frictional loss or fluid velocity through each component of the circulating fluids system, can be displayed at will.

Fairly significant rig modifications may be required to accommodate a state-of-the-art MPD kit on offshore rigs. For cases in which the only objective is early detection of flow abnormalities, Weatherford is introducing a system that requires minimal rig modification.

On fixed offshore rigs, a fit-for-purpose RCD is configured within the rig’s existing marine diverter. Returns are positively diverted to a flowmeter, and a simplified mass flow-in vs. flow-out PLC readout indicates or gives an alarm about kicks or losses in real time. The system is also useful when drilling with a closed diverter system, as a means of preventing risks such as a shallow gas kick reaching the rig floor before the crew has time (detection plus reaction) to implement well-control procedures.

On floating rigs, a gyro accelerometer is added to measure rig heave magnitude and frequency. The data from these measurements calibrate flow­meter output for heave swab/surge, enabling the detection of kicks or losses of much smaller quantities than the significant pit gain that may be otherwise required. This potentially can reduce the frequency of false positive kick alarms.

A decade ago, most operators’ offshore business units practiced MPD for the first time on prospects thought or known to be undrillable for safety, economic, and/or technical reasons with a conventional circulating fluids system. The CBHP and PMCD variations of MPD were mostly used to handle the types of drilling hazards that each addresses, thereby increasing recoverable reserves in the process. To date, there have been no reportable well-control incidents on such challenging wells attributed to the technology itself or the failure of its specialized equipment.

Today, the technology is applied to optimize operations safety and efficiency on prospects that could be drilled with conventional open-to-atmosphere systems. Where CBHP and PMCD variations have been applied for drillability reasons, it is anticipated that the RFC-HSE variation will see broader global application in the future because it can more precisely manage the wellbore pressure profile on otherwise conventional fluid and well construction programs. Early kick detection and the associated benefit of reducing the frequency of false positive kick alarms will likely be primary drivers for future applications of this variation of MPD.