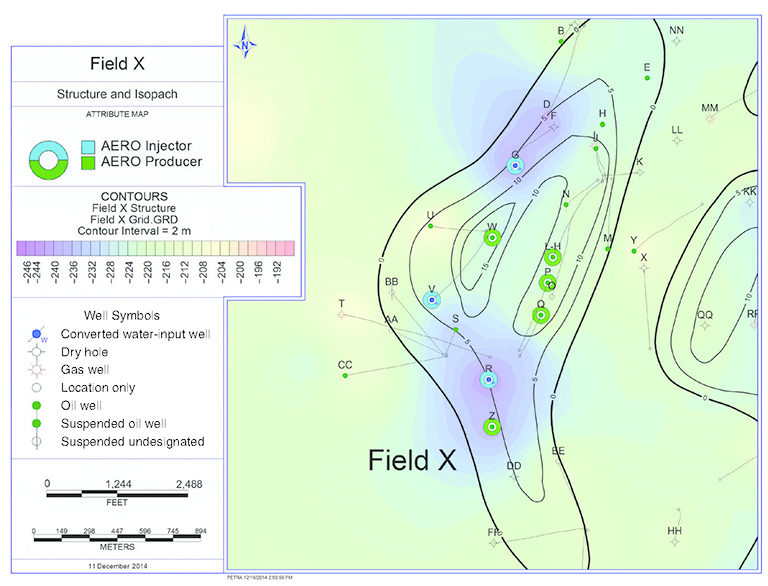 Fig. 1—A combined structure and isopach map of Field X in Alberta, Canada. Employing the Activated Environment for the Recovery of Oil (AERO) technology, three injectors, G, V, and R, shown in blue, are used to inject the nutrient into the reservoir. Wells producing from the target zone are shown in green.

Called Activated Environment for the Recovery of Oil (AERO), the technology used in this project represents a breakthrough in biologically based EOR by using a continuous injection of inorganic nutrients to stimulate indigenous microbes. The use of continuous injection (water and nutrients), which differentiates AERO from most previously attempted microbial EOR methods, prevents production disruptions and makes it easier to accurately measure, assess, and document the production benefits.

The key advantages of this method are

Biological EOR uses inorganic nutrients to activate indigenous microbes, those native to the field. Because no organic carbon is introduced, the microbial growth is restricted to the interface between the injection water and the oil, the carbon source for growing the microbes. The use of indigenous microbes is advantageous because they are perfectly suited to the local conditions and, unlike externally originated organisms, are neither costly to produce nor prone to rapid death in the reservoir and are thus in need of replacement. In addition, the concentrations of the nutrients required are relatively low, a major reason for the feasibility of continuous injection and stimulation.

The technology is among the most inexpensive tertiary recovery methods available and requires only minimal changes to waterflood facilities for deployment. It can likewise be used with relatively minor modifications in fields without an operating waterflood, such as fields with a natural waterdrive or very mature fields where waterflooding has ceased.

The biological EOR technology is producing a growing body of positive results, such as the following example from Canada.

The continuous microbial injection EOR technology is being applied in Field X in southern Alberta, where waterflooding is used to aid production. Initially, candidate fields were screened based on the following criteria: a sandstone reservoir, an ongoing waterflood or strong waterdrive, permeability of more than 50 md, oil above 16 °API gravity, and injection water below 10% salinity. Fields meeting these conditions were further screened for practical implementation by the operator and a subset was selected for sampling.

During the sampling, well-preserved or stabilized injection and production fluids were obtained and screened during a staged workflow. The initial stage of laboratory analysis and treatment design generally takes 2 to 4 months and consists of fluid chemistry screening and a step to determine nutrient composition and concentration using microbial populations indigenous to each field.

Fluids from three fields were screened successfully with a battery of chemical tests. All were found to be capable of supporting microbial growth and had salinity and organic content within the required ranges. Microbial populations in fluid combinations (oil and injection water) from each field were then stimulated with a range of inorganic nutrient mixtures, and their activity levels were gauged by measurements of the nutrient utilization rates.

Two distinct nutrient package types were tested to assure their compatibility with a range of field operations. As expected, the best-performing nutrient package was a high-energy (HE) formulation that rapidly stimulated high levels of oil-specific microbial activity relative to the second-best performer, referred to as the low-energy (LE) package.

After successfully showing the stimulation of the indigenous microbial population on oil and the nutrient packages at different rates, the project advanced to Phase II, in which Field X was chosen from among three candidates in consultation with the operator.

The field produces from several sand intervals in the Cretaceous Mannville group, which is found at depths of about –232 m to –246 m subsea. The estuarine valley-fill sediments consist of very fine to medium quartz-rich sandstone. This is one of the most prolific oil and gas producing formations in the region.

In Field X, the reservoir has an average net pay of 3.88 m with an average water saturation of approximately 35%. Cores from the field’s wells within show an average porosity of 23% and an average horizontal permeability of 1,382 md.

A small chemical injection skid was deployed in Field X and an injection of the LE package began in March 2013. As shown in Fig. 1 above, Field X initially had three active injectors and six active producers. All injectors were treated with the LE nutrient package.

At the beginning of the project, Field X had a production decline of 34% per year. After 31 weeks, a significant departure from this curve was observed, primarily in the producer perforated at the highest structural point in the reservoir (Well P). In August 2013, the well was shut in for operational reasons and, as predicted by the operative theory for this biological EOR method (Sunde et al. 2012), the producer perforated at the next highest level in the reservoir (Well L-H), responded immediately with an increased oil rate and cut.

The effect has continued for more than a year. In September 2014, the latest month in which public data was available, the production rate had risen to 63 BOPD, which more than quadrupled the predicted rate of 15 BOPD. Production in Field X was restored and maintained at or above the level obtained 11 months before the application of biological EOR, even with the loss of one responding production well during the project.

Through September, a continuous nutrient injection had stimulated 13,591 incremental barrels of oil in the year since the initial response, or a 256% increase over the modeled baseline production of 8,284 bbl. Oil production rate, water injection rate, and oil cut are summarized in Fig. 2.

In addition to field results showing an enhanced oil production, the time-to-effect was consistent with the biological responses observed during Phase I screening. The first response was seen in early August, a 31-week response time that was four times longer than a typical HE biological EOR project (Bauer et al. 2011). While the response time was increased, which was consistent with the lower rate of activity stimulated by the LE package, the response was distinct and significant, rising from 21 BOPD in July to 51 BOPD in September (Fig. 2).

Responses such as those observed in Field X are advantageous in mature fields nearing their economic limits and justify a growing interest in biological EOR as a strategy for stimulating waterflood- or waterdrive-supported production. In addition, because the manipulation of downhole ecosystems does not require high capital costs, the biological EOR technology can be deployed economically in small reservoirs such as those producing less than 100 BOPD.

Currently, multiple biological EOR projects are under way in North America, two of which are approaching a Phase III deployment wherein biological EOR will be implemented across waterflood units.