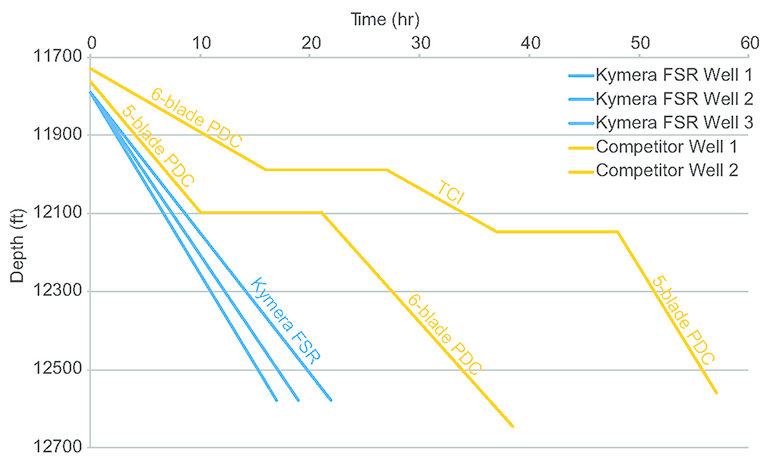 Fig. 1—A comparison of drilling the curve with the Kymera FSR bit and tungsten carbide insert (TCI) and polycrystalline diamond compact (PDC) bits in the Eagle Ford Shale.

It is inspiring to look back to 1909 when Howard Hughes Sr. and Walter Sharp introduced the roller-cone bit. The invention was the foundation for the discovery of vast amounts of oil in medium- and hard-rock formations, oil that many drillers suspected was there but was nearly impossible to reach with the bits of that day.

The roller-cone bit changed the industry, but we may forget why its immediate predecessor, the fish-tail bit, was such a burden on drillers as they strived to probe deeper targets. Often 24 hours would not go by without a twist-off occurring, and rig hands were constantly changing bits and “fishing” parts out of the hole. For drilling anything other than loose formations near the surface, it had proved impractical.

In a century’s time, the industry has made tremendous progress. But the limitations of physics continue to challenge the dynamic performance of the bit and bottomhole assembly (BHA) in the demanding downhole environments of today’s wells.

Tools come equipped with features such as torque reducers, depth-of-cut controls, and more flexible assemblies, to mention a few. The inherent problem of controlling the reactive torque between the bit and formation, while achieving optimal performance to reduce the number of drilling days, has remained a challenge.

The introduction of the hybrid drill bit in 2011, which combined roller cones and fixed cutters, was a catalyst to revisit these basic principles and better understand the benefits and efficacy of smooth drilling. The bit excelled in controlling torque fluctuations and exceeded the durability of fixed-cutter bits and the penetration rates of roller-cone bits.

The hybrid bit soon became the standard bit for drilling in hard and interbedded formations, such as those in certain Oklahoma and Canadian plays, because it enabled drillers to reduce the number of curve runs needed. The use of the bit expanded globally, helping to improve drilling results in interbedded applications that historically have met with mixed success when medium-set roller cone or fixed-cutter bits have been used. As results continued to improve, interest in stretching the capability of the technology increased.

This led to the introduction of the Baker Hughes Kymera FSR hybrid drill bit. With a frame designed for aggressive drilling, the bit features lower back-rakes and maximum cutter spacing for optimal efficiency, along with sharper roller-cone structures. Combining these technologies in this form has enabled the new bit to maintain smooth drilling ability while yielding a far more efficient cutting method in challenging carbonates, compared with five- and six-blade PDC bits.

The new bit displays a very low change in aggressiveness through a range of drilling parameters, compared with its PDC bit counterparts. This translates into lower reactive torque and has allowed the directional drillers to maximize tool performance by increasing motor differential pressure. In some cases, operators have increased the motor differential by up to 1.5 times in a slide section, resulting in a near doubling of the rate of penetration (ROP).

The bit was initially tested in the Wolfcamp formation of the Permian Basin in Texas. Its use has since expanded to multiple basins across North America. To date, there have been 154 runs in five basins, and operators continue to expand and push the boundaries for the use of these bits.

The directional bit was used to drill curves in three wells with fast, single-bit curves achieved in each well over an average curve distance of 789 ft (241 m) as shown in Fig. 1 above. One well was drilled in 22 hours at an average ROP of 36 ft/hr (11 m/h), a speed record for the operator for drilling the curve in that field. A subsequent well was drilled faster, reaching total depth (TD) in 17 hours with an average ROP of more than 46 ft/hr (14 m/h).

The hybrid bit showed exceptional tool face control and enabled more WOB for the fastest drilling through the curve achieved to date. The smooth drilling also mitigated bit and motor failure. All curve runs were completed with one bit, which had not been achieved previously on this well pad. By using the bit, the operator was able to reduce the cost per foot in the curve by at least 36%.

In another case, an operator in the Wolfcamp pay zone of the Permian Basin wanted to optimize drilling operations through the curve, a section that consistently proved very challenging because of the formation rock. The curve passes through Wolfcamp shale sections and the more challenging Third Bone Spring sand, which has a rock strength that varies between 10,000 psi and 20,000 psi. This section has proved difficult to drill in the curve, typically requiring several bits to reach TD.

When drilling the Wolfcamp field with PDC bits, it is necessary to increase the WOB to optimize ROP. This results in increased reactive torque downhole and leads to stick-slip and poor directional control, which adversely affects ROP. The vibration from the reactive torque also causes downhole motor failures, borehole quality concerns, and subpar bit performance. With these problems, several bit trips are often required to complete the curve.

To address the difficulties, the Kymera FSR bit was used. The drilling effort achieved a consistent buildup rate of more than 14° per 100 ft on a 2.12° adjustable kickoff and an ROP of 38.8 ft/hr (11.9 m/h), more than double the field average, and finished the curve in one run (Fig. 2). The reduction in torque and smooth directional control of the bit saved the operator 18 hours of drilling time, and it has consistently achieved similar time savings in the field.