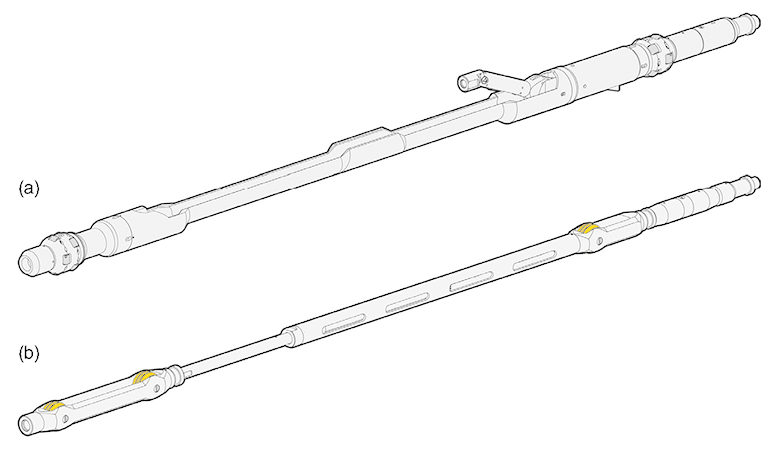 Fig. 1—(a) An Advanced Kickover Tool (AKT) is shown with its arm assembly initiated and in the extended position. (b) A Low-Loader Roller Bogie Jar is connected to the top of the AKT and delivers low-friction mechanical jarring action.

Gas is delivered from surface-based compressors by way of the annulus between the casing and production tubing to a series of gas lift mandrels (conduits), which are positioned at strategic points within the production tubing string. When a predetermined gas pressure is reached, valves that are set within the mandrels open, causing gas to be “injected” into the production tubing, thus reducing the density of produced fluid and enabling flowback to the surface.

Various types of valves are used in gas lift mandrels, depending on the need of the well. These valves are typically preinstalled and deployed with the production tubing string during well completion and may need replacement later in the life of the well. This will require an intervention.

When designing a gas lift completion, engineers must consider a range of factors such as the availability of gas and the infrastructure on surface to process and deliver the gas into the well. Placement of the mandrel within the completion string is also critical when planning for production optimization and future intervention strategy.

The industry remains cautious when designing gas lift completions, tending to place gas lift mandrels in areas of the well that are considered accessible when using standard slickline techniques. Most operators, if possible, place mandrels at no more than a 60° deviation within the completion string. However, this approach can lead to a suboptimal gas lift completion, with the benefit of optimizing production rates, by placing mandrels at greater true vertical depth, sacrificed for ensuring the ease of intervention access.

Effective gas lift remediation has been a major challenge for the well intervention service industry and has not advanced significantly in terms of technique or operational efficiency. Slickline tools and methods are generally the same as those used when gas lift was introduced to the market about 40 years ago.

Kickover tools deployed by slickline are used to undertake the vast majority of gas lift valve maintenance. The kickover tool is attached to the bottom of a standard tool string, which includes stem (mass) and mechanical jars that are positioned just above the tool. The mechanical jars deliver a critical upward and downward shock load during valve setting and retrieval. The tool string may also include power jars to deliver a significant upward jarring force when retrieving valves, if required.

The kickover tool is lowered into the production tubing to a point just below the target gas lift mandrel and, when pulled back up, the tool interacts with the mandrel orientation sleeve by means of a trigger that protrudes from the tool body. When positively located and aligned, the arm in the kickover tool reaches over by a spring force, positioning itself directly above the valve pocket. This enables the retrieval or setting of the valve, depending on the objective.

The slickline operator is able to manipulate the kickover tool based on information provided by a basic surface instrumentation that indicates a change in wire load, which allows the operator to gauge how the tool string is reacting within the mandrel thousands of feet away in the wellbore.

Electric line tractors and strokers, and coiled tubing, have also been used to change gas lift valves placed at a high angle. However, these techniques lack the finesse that is critical to gas lift interventions, require additional personnel, and cost more than light-touch slickline methods.

In some oil and gas regions, the frequency of slickline gas lift intervention has diminished because of factors such as complacency and operating budget constraint and limited living quarters at facilities, which increases the difficulty of conducting an intervention. In addition, the increased turnover of service workers has diluted operational expertise for the kickover tool in the slickline community. This growing industry challenge must be met by steps to improve operational performance, increase intervention efficiency, and reduce asset risk.

A Step Change in Interventions

A new means of improving the efficiency of gas lift intervention has been developed. Wireline Engineering’s Advanced Kickover Tool (AKT), shown in Fig. 1a above, incorporates a number of features that enable free movement, which allows the operator to manipulate the tool more effectively within the mandrel and thereby reduce the likelihood of costly misruns. The majority of these features are designed to eliminate friction, which is a major cause of poor execution, especially at higher deviation.

Integral to the tool are a series of high-efficiency roller subs that support the tool along its entire length. The rollers eliminate troublesome contact friction, enabling access and maximizing operational efficiency during tool operation. Low-torque swivels and a radially balanced body design allow the tool to rotate freely when aligning itself in the gas lift mandrel.

These combined features enable the tool to deliver a smooth transition and improve the likelihood of a successful intervention, regardless of the location or pocket orientation of the mandrel. In addition to its use in high-angle mandrels, the tool is effective in mandrels set at lower angles.

To maximize operational efficiency, a low-friction jar and the Roller Bogie wireline conveyance system (Fig. 1b above) are typically used. The jar is able to deliver an efficient bidirectional mechanical impact at high angle, and the Roller Bogies support the remaining tool string components.

With this combination of technologies, the tool string is supported on rollers and lifted clear of the tubing wall, eliminating most of the friction that can hinder access, impede execution, and cause mis-runs. Importantly, this approach ensures that the mass is transferred to the end of the tool arm. This is critical for effective setting and retrieval of gas lift valves, especially those placed at high angles.

Another benefit of reduced friction is a more precise indication of tool string load transfer at surface, allowing the slickline operator to identify the tool string movement more easily for working within the mandrel. This enables improved decision making that can reduce the chance of a mis-run.

For an operator offshore Malaysia, the change-out of gas lift valves by conventional slickline intervention in a 7-year-old well with a 3½-in. dual gas lift completion had proved impossible because of challenges posed by well geometry and wellbore wax deposits. With gas lift mandrels set in the short and the long strings, and wellbore deviations of up to 71°, the operator was considering the use of wireline tractors.

The advanced gas lift tool string combination was proposed as an alternative. After a careful evaluation, the option of using tractors was abandoned and the proposal was accepted as the primary intervention method because of cost, time, and risk factors; the AKT’s track record; and its suitability for working in high-angle mandrels.

In multiple runs, valves were successfully retrieved and set in three gas lift mandrels at depths of up to 4,765 ft and 71° deviation, with another four runs to set and retrieve deep-set valve catchers using advanced roller technology. No failures or lost time were recorded during the project.

An operator in the United Kingdom North Sea had budgeted 7 days to carry out a four-valve intervention in a 5½-in. gas lift oil producing well. The well path is shown in Fig. 2. The tool string was to include a standard kickover tool with no alternative conveyance system considered. When deployed, difficulties were experienced in reaching the target mandrel because of deviation and suspected debris, ultimately resulting in a mis-run because the tool was unable to latch the gas lift valve. The proposal for an advanced gas lift tool string combination was accepted and the equipment was mobilized to the installation at short notice.

While awaiting the arrival of the tool string package, an alternative standard kickover tool was deployed that retrieved the uppermost valve, but considerable nonproductive time (NPT) was incurred. The same standard tool string had great difficulty in setting the replacement valve, resulting in more NPT. While attempting to pull the next valve, the tool string became mechanically stuck in the well for 10 days.

The advanced gas lift tool string package was then used to work over the three remaining high-deviation mandrels, effectively retrieving and setting the other 1½-in. valves without any more problems or NPT. The customer’s most complex gas lift well was returned to production.

These case studies illustrate successful gas lift remediation at up to 71° deviation. The advanced gas lift tool string package has successfully retrieved and set gas lift valves in mandrels of up to 80° deviation.