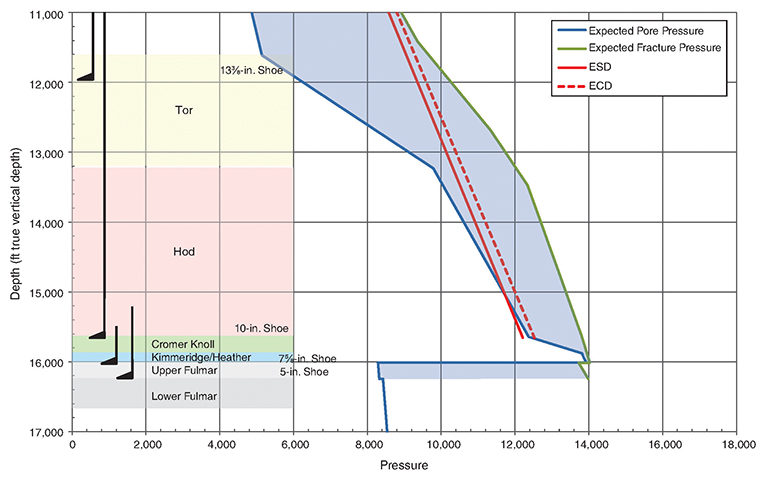 The Shearwater field is a deep, high-pressure/high-temperature (HP/HT) reservoir located in the UK Central Graben of the North Sea. A high level of reservoir depletion (greater than 8,000 psi) has resulted in significant changes to the drilling envelope that has added complexity to the drilling practices required to exploit the remaining reserves successfully. Managed-pressure-drilling (MPD) technology was implemented in conjunction with drill-in liner and wellbore-strengthening technologies to successfully deliver the first well in a redevelopment campaign and prove the techniques required to prolong field life.

Shearwater is an HP/HT gas/condensate field discovered in 1988. Primary production is from the Fulmar, a sandstone reservoir with virgin pressure of 15,400 psi and temperatures greater than 360°F. The field came on stream in 2001. The large field-pressure depletion resulted in compaction at the Fulmar formation level and led to mechanical failure of the production liners because of shear deformation.

A drilling campaign to restore Fulmar production was initiated in 2013. The primary plan was to abandon the existing reservoir sections of the wells and perform shallow sidetracks from the 20-in. casing. A 16-in. hole was planned to the top of the Tor formation (above the pressure ramp), and a 12¼-in. hole was to be drilled into the top of the Cromer Knoll formation. 10×10¾-in. casing would be set across this hole section, and an 8½-in.-hole section would be drilled to just above the top of the Kimmeridge shale formation. A 7⅝-in. drill-in-liner system would then be used in conjunction with MPD and wellbore-strengthening material to drill into the top of the Fulmar reservoir. The reservoir was planned to be drilled with a 6½‑in. hole size opened out to 7½ in., and the reservoir would be completed with a 7×5‑in. production liner. The MPD objectives by hole section are discussed in detail in the complete paper.

The cementing services market size in the US is expected to drop 50% year-on-year from 2019. The significant drop in Permian Basin activity will account for 40% of the total market size reduction.

This year, excellent papers have been presented, augmenting our knowledge and responding to the challenges of complex wells and efficiency requirements. At the same time as we “Strengthen the Core,” we continue to focus on design, delivery, and evaluation of cementing operations.