A Request for Two Statistics Could Change Offshore Drilling 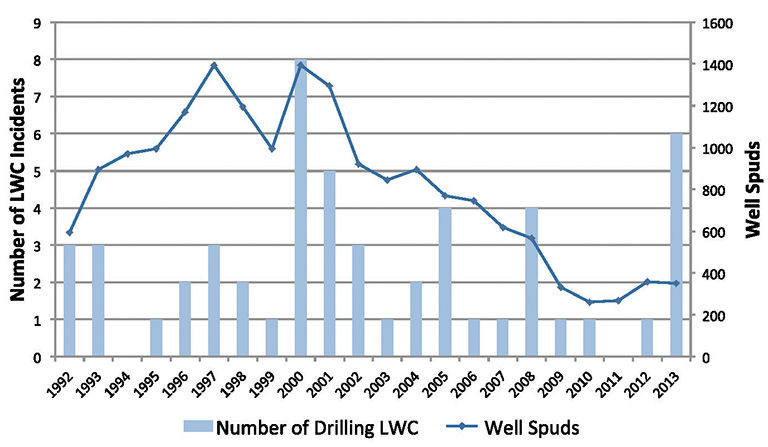 A scientist hired by federal regulators to look for ways to reduce the risk of well blowouts said it is time for the oil and gas industry to treat kicks taken while drilling the same way doctors treat heart attacks.

Daniel Fraser, a lead collaborator on a research program looking for ways to reduce the risk of a loss of well control for the United States Bureau of Safety and Environmental Enforcement (BSEE), was making a case for a more statistically driven method of measuring fluid flow changes and using that data to reduce drilling risk.

Just as the oil industry has long realized that small influxes of fluid can help predict problems, doctors know that prompt action taken when a patient experiences the symptoms of a heart attack leads to better outcomes. That had little effect on patient care until response time studies showed that medical providers were not living up to their standards. Those measures led to fundamental changes that shortened the time to treatment and reduced the number of deaths.

During a session at the 2014 SPE Annual Technical Conference and Exhibition, Fraser used the medical analogy to try to convince drillers of the value of more precise measures of drilling fluids out of wells and faster response times. Based on his work for BSEE, those two measures could significantly reduce the number of incidents and the severity of those that occur, he said.

Specifically, the focus is on kicks detected during periods when more fluid is flowing out of a well than into it, suggesting the pressure in the well may not be high enough to block influxes of hydrocarbons from the reservoir. A kick is not defined as a loss of well control, but it can be the first sign of one. “A key finding is as many as half of the loss of well-control incidents may have benefited from early kick detection,” Fraser said. And the second-highest finding was leaks related to cement quality.

Both findings were a factor at the 2010 Macondo well blowout in the US Gulf of Mexico, where 11 workers died and the drilling rig was destroyed. Early kick detection might have altered the outcome. “Not reading and interpreting kick indicators was a key factor in the Macondo incident,” Fraser wrote in a related paper (SPE 170756). “This suggests that an early kick detection system providing direct and unambiguous indications of a kick could have alerted the crew significantly earlier.”

The advice offered by Fraser, who has done statistical analysis of operations in the nuclear power and other industries, is to systematically gather data based on earlier indications of kicks, and reduce the response time to those events. “Risk-reduction strategy depends on early kick detection and prompt responses,” he said.

Gathering the data and making use of it will require significant changes in the equipment on rigs and how operations are managed, not to mention a high level of industry cooperation among competitors and with regulators.

When medical institutions were confronted by studies showing response times were slow when patients came in with symptoms of a heart attack, it required changes, such as training and equipping ambulance crews to recognize and aid those with heart attack symptoms. In the oil business, that may mean training drillers and modifying control systems to equip them to react quickly without time-consuming consultation.

Similar to medical institutions that began gathering data on patient treatment times, Fraser said collecting data on kicks should be done on an industrywide basis. The publicly available information now is limited. Fraser’s research was based on two sources collected by the agency, the BSEE incident database that is publicly available, and a weekly activity report compiled by the agency, which is not public.

Fraser suggested the data on kicks and response be collected in a standard way and sent to a central database for further analysis, which can be applied to improve drilling techniques. “We believe the industry should measure this and supply it to the regulator to measure industry performance,” he said. “A lot of kick detection is not shared among operators. What we are trying to do is make this simple.”

Those two statements point to aspects of his proposals that can get complicated. For one, Fraser pointed out that as an adviser to the BSEE, he could not say what it plans to do based on this work. But he added that the BSEE tends to be “very prescriptive” when writing regulations, and perhaps the industry could find a “better way to do this without being so prescriptive.”

Doing so would require companies in this fractured business to agree on a standard method for early kick detection, beginning with a method for determining what influxes can be considered a kick. That is tricky in deepwater wells in which a unique phenomenon looks like an influx, but is not, such as ballooning. The number of possible false alarms could grow as the volumes measured become more precise.

The level of precision that Fraser would like to see could require new hardware and monitoring systems. Even with advanced sensors that measure the level of drilling fluid in a mud tank, it is difficult to detect variations of less than 10 bbl, he said. Installing the Coriolis flowmeters, which require other modifications and training, could reduce the margin to 5 bbl, said Fraser. That could be used to allow earlier kick detection, but that raises another issue: how to manage a well to keep it within tight tolerances. A system constantly sending warning signals could slow drilling to a crawl, or it might be ignored for constantly offering false warnings.

An alarm system based on a formula that realistically evaluates the risk is critical. And keeping a well within those tight tolerances could push drillers to consider closed drilling systems, such as managed pressure drilling. Those are metered systems in which backpressure can be applied when there are indications of an influx. Fraser said that “a closed system would be a big win.” Sitting nearby was one of the organizers of the panel session, Dan Hannegan, an engineer at Weatherford who is a pioneer and advocate of managed pressure drilling.

Making all that work will require distinguishing normal variations from kicks. When pointing to a chart showing the wide range of reported fluid influxes, he noted that some of the larger ones “may be a difficult situation that they managed well.” When asked if he had studied the role of operators in the reported well control incidents, Fraser said there was no database covering operating decision making, but “we are preparing a method to get at that.”

The paper noted the cases in which large kicks have been taken on rigs with flowmeters, pointing to the need for training and procedures to ensure that the workers know how to react and continue to observe multiple measures of flow to ensure meters are working properly.

This amounts to a large effort to prevent incidents that happen infrequently. In the study, three periods were examined dating back to 1970. The trend of incidents went steadily downward until 2007 to 2013, which included only one big event. “If you take Macondo out of the mix, it (that period) looks really good,” Fraser said. He pointed out that [in] deeper wells, the number of wells drilled goes down but the subsurface environment becomes more challenging. For a bad period: “It only takes one.”

A Request for Two Statistics Could Change Offshore Drilling

The average geothermal gradient in the subject deepwater field in Nigeria is 4.37°C/100 m, nearly twice the gradient in most fields. As a result, the magnitude of the expected annular pressure buildup (APB) during steady-state production is large enough to threaten well integrity.

The complete paper discusses a geophone array, including four, three-component geophones deployed by wireline, that provides a solution for this problem by creating a 3D map of the acoustic environment.

The complete paper presents the results of an investigation into the creep behavior of North Sea shales and their ability to form effective annular barriers.