Pushing the Limits of Deepwater Stimulation 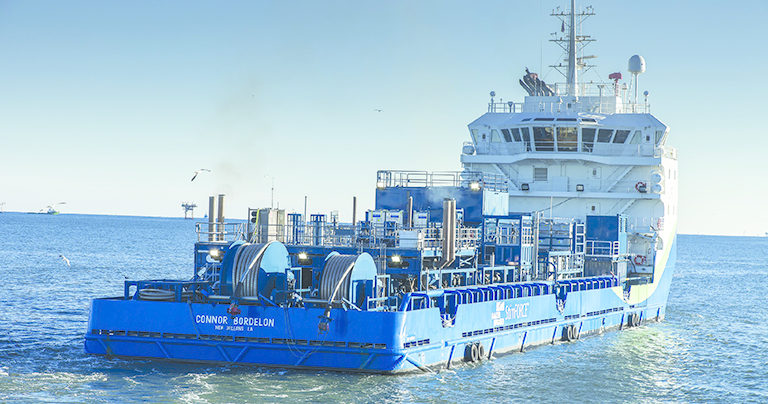 Photo courtesy of Baker Hughes.
Baker Hughes operates a global fleet of stimulation vessels that are used to increase production in subsea wells with acid or fracturing treatments. Without the offshore technology that these vessels deliver, subsea wells would not produce enough hydrocarbons to be economic.

The lower tertiary formation found in the pre-salt layers of the Gulf of Mexico has become a proving ground for extending what is possible when completing multistage fracturing in ultradeepwater wells. The stimulation vessels that pump fracturing fluids, acids, and proppant into these wells are key to achieving the volume of production needed to make them profitable.

Baker Hughes operates one of the industry’s youngest fleets of such vessels in the North Sea and offshore west Africa, Brazil, and Vietnam. But because of the strength of lower tertiary rocks and the pressure required to improve contact between the well and the formation, some of the company’s newest and most advanced vessels are reserved for the Gulf.

One of them, the Blue Dolphin, is the world’s first 20,000-psi stimulation vessel. Because of its pressure-pumping capability, one of its first jobs was to help kill BP’s Macondo subsea blowout in 2010. Now, there is talk about increasing the capability of the vessels or modifying how they carry out operations to improve production in the lower tertiary.

Similar to the shale formations found onshore, lower tertiary rocks have very low permeability. But it is the extremely high pressure environment they are found in that requires larger horsepower pressure pumps for stimulation and fracturing than all other subsea formations. “It is important to understand the difference between the lower tertiary challenge and the rest of the business,” said Chris Malbrel, a product line manager of sand control and pumping at Baker Hughes.

In general, whether they are working in the lower tertiary or less demanding reservoirs, offshore stimulation vessels share the philosophy used in onshore shale plays and even use some of the same equipment, including the pumps and proppant blenders. “The fundamentals are the same,” Malbrel said. “You are trying to do exactly the same thing offshore as onshore, however, the environment is different and the risk reward equation is different.”

In the offshore industry, lower tertiary wells are especially expensive because they tap into ultradeepwater high-pressure/high-temperature reservoirs and are among the deepest wells drilled in the Gulf. These conditions drive costs up by hundreds of millions of dollars. To recoup their investment and make a profit, companies must see high outputs measured in tens of thousands of barrels per day for decades.

Lower tertiary wells are relatively young compared with other types of offshore developments, and there is an open question as to whether the industry’s current offshore pressure and stimulation methods need to be stepped up a few notches. “It is a debate among operators,” Malbrel said. “Some operators believe the way we are developing the wells today is not going to be enough.”

Most of today’s deepwater fracturing jobs are limited to a maximum of five stages because of the amount of proppant that one vessel can bring offshore, which Malbrel noted is enough to meet operators’ current demands. But he said operators are wondering if 10 or 15 stages will be needed in the near future to yield more production, as it has onshore.

“That technology, in terms of completion, does not exist yet,” for offshore jobs, he said, explaining that do 10 or more stages while keeping the size of stimulation vessels manageable will be a challenge but not overly complicated. More stages means more proppant. Right now, the vessels are self-contained and arrive on location with everything needed for the job without having to sail back to port. If more fracturing stages are needed down the road for more challenging wells, Malbrel said that instead of building larger stimulation vessels, a simpler solution might involve bringing along a supply vessel to store and transfer extra volumes of proppant for larger jobs.

Onshore, dozens of pumps and other systems are assembled together on a pad site over a span of several hours before the fracturing job can commence. In contrast, when stimulation vessels pull up alongside a drilling rig, drillship, or a platform, they must be immediately ready to connect to the riser via a flexible pipe to carry out the fracturing job. This requires excellent station-keeping capabilities to prevent the stimulation vessel from moving away from the rig or getting too close to it.

To handle rough seas, Baker Hughes’ latest additions to its fleet are equipped with a Class 2 dynamic positioning system, known as DP-2, which provides added redundancy if one station-keeping system fails.

Pushing the Limits of Deepwater Stimulation