Photo courtesy of DynaEnergetics
Fig. 2—From left, the installation of the detonator in a new perforating gun is a simple plug-and-go insertion process.

The DynaStage perforating system, developed by DynaEnergetics, incorporates new technology in the addressable firing system and an improved mechanical design that eliminates potential human error. The system can operate more efficiently than traditional systems and, with its additional safety features, allow other wellsite operations to run in parallel with the perforation process.

As a result, the system can achieve improvements in perforation quality and performance reliability, with fewer misruns, while operating efficiently enough to lower total completion costs. The DynaStage system has successfully completed field trials in multiple basins and been commercialized.

Perforating operations with explosives place the explosive components and workers in close proximity, especially during the arming process. Traditional resistorized detonators can contribute to an increased risk of injury and destruction when connecting the detonator to the gun string and the wireline truck.

Safety procedures have been developed to address the risks in this process, and the American Petroleum Institute (API) provides guidelines for safe handling of explosives through Recommended Practice 67 (API RP 67). One of the established best practices is to suspend all surface operations while working with the resistorized detonators. The arming and connection of a gun string at the surface can take up to an hour, meaning that no other wellsite operations can be completed during this time.

The DynaStage system removes the risks of this process by providing an addressable and radio frequency (RF)-safe system with immunity to high voltage and current levels. The firing system is built on a low-voltage, digital communication platform that uses the DynaEnergetics detonator technology, proven to successfully communicate and initiate on command during more than 300,000 perforating operations, without a safety incident. This technology enables the verification of all components in the system, including the addressable switch, the RF-safe detonator, and the RF-safe ignitor, during all phases of the operation.

Electrical connections and component functions can be checked during assembly and pumpdown operations with a communication verifier, proving that the gun string is fully functional, with no mechanical or electrical connection issues. Independent, third-party testing verifies the additional protection against voltage and current provided by the DynaStage system (Table 1). 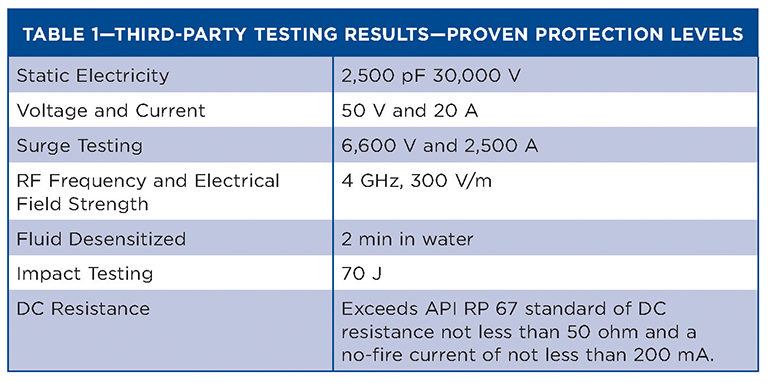 The safety measures built into the system allow surface assembly to happen in parallel with other operations. The gun string can be fully built and tested before connection to the wireline and without stopping other wellsite operations. System features, including the plug-and-go-style detonator and single-use connector subs, minimize the assembly time. The time required for changeover from a used assembly to the connection of a new gun system is less than 10 minutes from rig down to rig up.

During assembly of conventional perforating systems, including mechanical component assembly, arming the system, and connecting the gun string to the wireline, there is a risk that resistorized detonators can be initiated with RF energy, stray current, or stray voltage at a wellsite, under certain conditions.

When a traditional gun string with a resistorized detonator is used, all surface operations—including hydraulic fracturing, radio communications, cell phone communications, and other wellsite activities, are suspended at the start of a perforating run until the gun string is at least 200 ft into the well. Operations must be halted again after perforation when the gun is raised to within 200 ft of the surface.

The DynaStage safe system provides a level of safety that enables parallel operations with no depth restrictions and without shutting down critical communications. With the protection afforded against RF saturation, normal wellsite operations can continue while the gun string is lowered into and raised out of the well. Operators using this protocol can recover up to 30 minutes per fracture stage in their simultaneous operations. The overall savings during the completion can be substantial.

The system is intended to virtually eliminate misruns by aiming to achieve a 99.9% operating efficiency (1 misrun per 1,000 runs). To achieve this goal, the mechanical and electrical assembly of the gun system was redesigned. One major improvement was to change the way the detonator is assembled within the system. A traditional detonator is assembled into the perforating gun connector sub requiring wiring connections and a port plug with O-ring seals. Wiring connection issues and leaking O-rings are among the most common causes of perforating gun misruns.

With the DynaStage detonator, the detonator wires have been removed and replaced with an injection-molded connector, eliminating crimped wire connections and the associated risks of wiring damage and poor electrical connections (Fig. 1). The detonator was also relocated to the gun body, from the tandem arming sub, which allows the use of a much shorter, disposable perforating gun connector sub and eliminates the port plug.

The gun is shipped to the wireline customer fully assembled, except for the detonator. All preshipping assembly operations are performed in the DynaEnergetics gun assembly line, which has been optimized for high-volume assembly, and automated inspection and electrical verification of the assembled product. The production line process mitigates the risk of human error typical in the manual redress, cleaning, wiring, and assembly of conventional perforating guns. Field assembly only requires inserting the plug-and-go detonator, shown in Fig. 2 above, and threading the guns together.

Many additional design changes were made to reduce the chances for human error, assembly damage, or leakage. The DynaStage gun system benefits are summarized in the 2015 paper SPE 174922, High-Performance Plug-and-Perf Completions in Unconventional Wells.

Field trials for the system began in February 2015 and ran for 6 months. The trials included two wireline companies and were conducted with eight operators in the Permian Basin and the Eagle Ford and Marcellus shale formations. More than 6,000 guns were fired, and more than 1,000 stages were perforated during the trials.

Weatherford chose to run trials of the system based on its safety and operational benefits. In addition to the intrinsically safe system that reduces the risk of explosives handing and eliminates radio silence concerns, the system required less shop labor and made operations easier at the wellsite.

Weatherford noted several advantages of using the system. Communication with the addressable detonators and igniters, with surface and downhole verification capabilities, enabled improved troubleshooting. The ease of changing from one stage cluster of perforating guns to the next reduced the surface transition time for switching from a used to a newly assembled tool string. And the ability to continue other wellsite operations while perforating saved equipment and labor hours.

Cluster design changes can be made “on the fly,” allowing operators flexibility with the number or sequence of guns, and the guns need only to be screwed together, with rewiring eliminated.

After the field trials, with the technology commercialized, Weatherford began running the DynaStage system in a high-volume horizontal completion project for a Permian Basin operator. The introduction of the system allowed a side-by-side comparison with a conventional gun operation used in previous plug-and-perforate stages. With a large data set of more than 400 runs completed, the benefits of saving time and reducing operational failures were significant.

Since the commercial launch, another 1,500 guns have been fired, bringing the total guns fired to more than 7,500 by the end of 2015. The production success rate has been 1 misrun per 420 runs for a perforating efficiency of 99.41%. DynaEnergetics continues to refine the system components, assembly process, and operating procedures with the objective of attaining the 99.9% efficiency rate.

Each perforating stage run with the system reduced completion time by an average of 32 minutes, compared with a conventional system, because of the efficiency of surface-level transitions from gun to gun and well to well. Improved downhole reliability was also achieved, with an average decrease in nonproductive time of 2 hours per 100 runs. A significant part of the improved reliability was a reduced need for on-site user interactions that often lead to electrical issues and misruns in conventional wired perforating systems.

The use of the perforating system resulted in fewer days on location and operator cost savings (USD) as high as six figures. The Permian Basin operator who used the commercialized DynaStage system has incorporated it into the company’s normal completion program.

Through the implementation of design and safety improvements, the DynaStage system has demonstrated significant improvements in perforating performance and enhanced operational efficiency, while reducing well completion costs and providing a safer work environment.