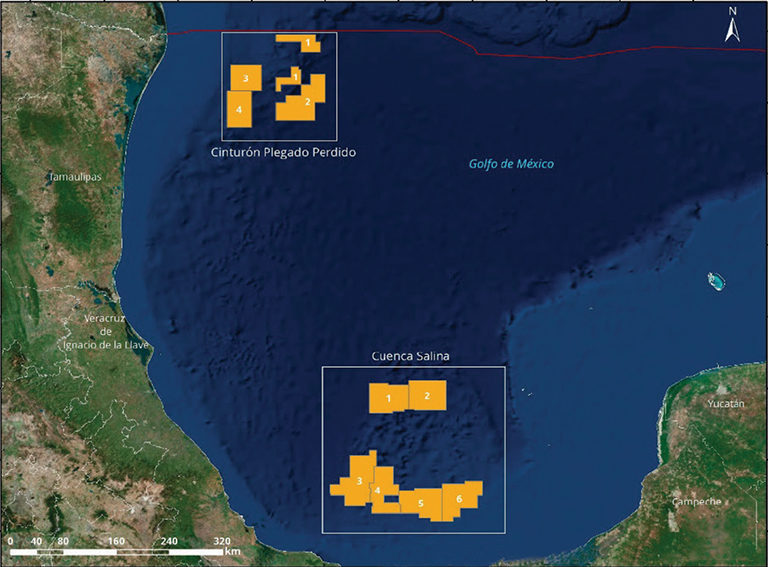 Graphic courtesy of the National Hydrocarbons Commission
The successful development of 10 prospective deepwater blocks offshore Mexico may require significant capital investments to be made on upgrading or building new ports.

The deepwater blocks Mexico plans to lease to international operators in December are among the deepest, most remote, and geologically challenging in the world. But the difficulties of developing these areas will start onshore, where adequate and secure port facilities are few and far between.

“This is where the issue is about deep water,” said Chris Garcia, the Mexico international account director and deepwater adviser at Schlumberger. “Logistics are going to be very challenging, much more so than on the American side.”

Speaking before a packed room at an SPE Gulf Coast Section International Study Group meeting, Garcia explained that the port problem will be especially felt by those companies looking to develop the Perdido-area blocks. The area is expected to be the most sought after because of the significant discoveries made on the US side of the maritime border.

The closest port to Perdido is near the border city of Matamoros, but it is off limits to the offshore industry because of security issues related to Mexico’s ongoing war against narcotic traffickers. Garcia explained that per Schlumberger’s color-coded risk rating, the areas along the Mexico-US border are a red zone—the same classification given to Iraq. While that could change in the future, even Pemex, Mexico’s national oil company, has decided it is safer to use the port of Tampico, located 300 miles farther south, to support its Perdido activities.

The next-best option is another 120 miles to the south at the city of Tuxpan, which has one of the most active ports in the country because of its proximity to Mexico City. There are barrier islands much closer to Perdido that could service the deepwater sector but plans to develop these areas remain unfulfilled.

Brownsville, Texas, located just on the other side of the border from Matamoros, has been discussed as a possible solution to the transit challenges. However, Garcia said that it too is off the table unless some sort of legal framework between the two countries is established to make that possible. “I don’t see that happening tomorrow, or mañana,” he said.

To the south where the other half of the exploration blocks on offer are located, the chief issue switches from security to supply. The deepwater port of Veracruz is geographically well positioned to serve the southern blocks but it has historically not been friendly to oil and gas activities.

The most well-developed hub for offshore support in Mexico, Ciuduad del Carmen, is yet another port city that can be scratched off the list. “Ciudad del Carmen is very well developed, lots of infrastructure—very crowded, and you are not going to get a dynamically positioned workboat in there because the draft is too shallow,” Garcia said.

Moving to the east is the port of Dos Bocas where Schlumberger and other oil and gas companies have stationed support and seismic vessels. The port is deep enough to accommodate large rigs and, if expanded, could become a major staging area to support both new deepwater and shallow-water projects. That said, Garcia noted that Dos Bocas still lacks an international airport, an adequate number of hotels, and is a moderate security risk.