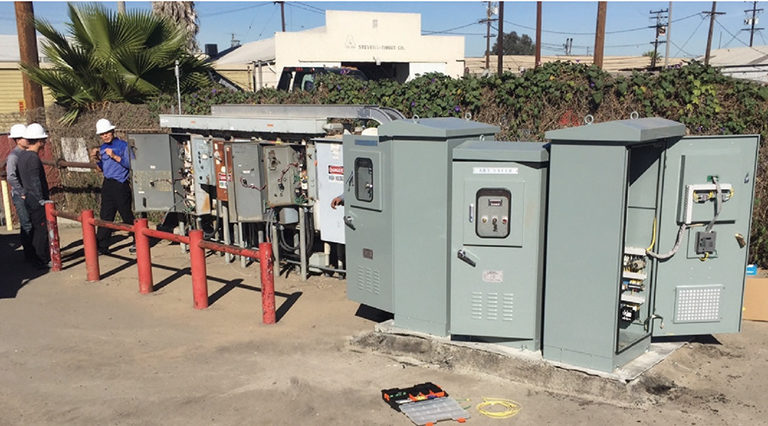 Photo courtesy of Everhart Energy Technology.
A test site for a new technology that is designed to optimize the electrical usage of a pump jack and trim electricity costs in aging oil fields.

Everhart Energy Technology, a startup company based in Beverly Hills, California, has developed a system it believes will help small to medium-sized operators cope with the reality that, while oil prices have fallen, their electric bills have not.

A test site for a new technology that is designed to optimize the electrical usage of a pump jack and trim electricity costs in aging oil fields.

Installed between a pump jack lift and its power source, the system regulates the power being transmitted to the electric motors and also captures the kinetic energy generated on the pump’s down stroke—similar to how a hybrid vehicle works. The technology was invented in South Korea for industrial and commercial equipment and Everhart, founded in 2014, has secured the rights to apply it in oil fields in the United States.

Called an advanced regenerative technology (ART) system, the company says it is capable of reducing energy costs by about 30% to 42%. The energy generated during the down stroke can be sold back to the utility provider, or in dense oil fields it can be reused by adjusting the strokes of two adjacent pump jacks to share power between the units.

Tommy Chung, founder, president, and chief executive officer of Everhart, said the company has successfully deployed test units in two California fields where average electric costs are among the highest in the nation. “One of them has over 1,000 pumps,” he said. “Where you literally have hundreds of pumps at one site, that’s the kind of market we like to go after.”

Glenwood Garvey, director of technical services at Everhart, explained that many pump jacks are about 60% energy efficient, and that the ART system is designed to increase that number by a significant margin. “Almost on a millisecond basis, it is monitoring the exact electricity that is required for that motor and not sending electricity that is not going to be used,” he said.

Across the US there are more than 400,000 stripper wells operated by approximately 7,500 companies. The collective might of these low-yield wells churns out almost 1 million B/D—equal to about a tenth of US production.

But at current prices, overhead costs, including transportation, water disposal, and electricity, are forcing companies to make hard decisions. “For companies that are shutting down up to 75% of their wells, with our technology, we could make some of those wells marginally profitable even in very difficult circumstances,” Garvey said.

The company notes that an existing technology known as a variable frequency drive (VFD) has been the conventional system used to increase the electric efficiency of pumps. But unlike the VFD technology, Everhart says the ART system is capable of returning energy to the utility grid for a rebate.

In addition to California, the company is also focusing on west Texas and North Dakota because of large market potential. For a 60-hp motor, the ART system’s retail cost is about USD 13,500. Based on the company’s economic models, the payback period is less than a year where electric costs are highest. In areas where electricity costs are relatively low, such as Texas, that could stretch out to just under 2 years.

The installation of each unit takes a couple of hours and can be linked to a company’s network for remote monitoring. Everhart also claims that regulating the power supply can reduce vibration and heat, which put stress on pump motors.