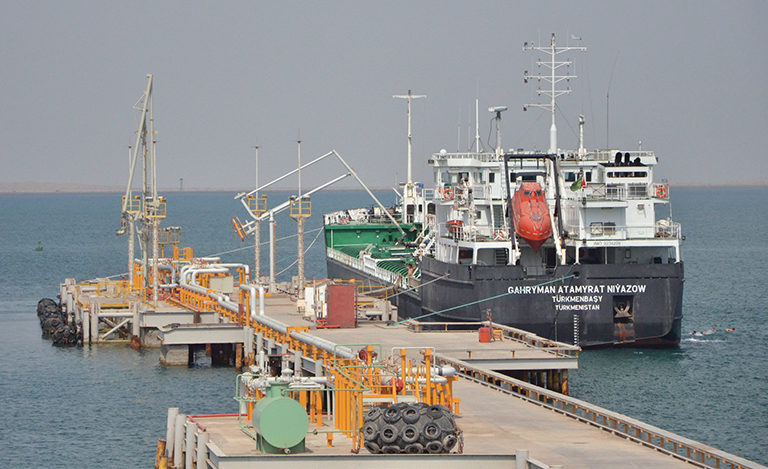 Photo courtesy of Dragon Oil
A tanker is loaded from Turkmenistan’s Aladja jetty.

The past decade has seen the Caspian Sea region come into its own as one of the world’s most important frontiers in oil and gas production. Though it saw some of the first oil-producing wells of the modern era, the region’s importance to the global industry—if not to the Soviet Union, which long constituted most of its shoreline—waned as the Middle East took center stage. But with exploration and production (E&P) efforts expanding, geopolitical realities changing, and technology bounding forward, the Caspian has again moved into the spotlight.

Along with the Russian Federation and the Islamic Republic of Iran, three Central Asian republics—Azerbaijan, Kazakhstan, and Turkmenistan—share the Caspian’s extensive shoreline and, to varying degrees, its enormous potential for oil and gas production. All three republics are in the midst of intensive efforts to underpin their developing economies by increased exploitation of massive reserves.

Boundary and rights disputes among the neighbors over Caspian waters are common, and often greatly complicate investment opportunities. Azerbaijan’s oil reserves are estimated to be approximately 7 billion bbl, with gas reserves of 35 Tcf; Kazakhstan’s oil and gas reserves both rank well within the world’s top 20, at 30 billion bbl and 1.5 Tcm, respectively; and Turkmenistan’s gigantic gas reserves are among the world’s largest at 17.5 Tcm. In their third decade of full independence, all three nations have encountered challenges in contacting, producing, and exporting their impressive resources.

Some of these challenges, such as struggles with creating an efficient infrastructure and a skilled domestic labor force, are endemic to emerging nations, while others are particular to the broad range of climactic and environmental conditions that encircle the world’s largest enclosed inland body of water. As the three young republics search for the best way to solidify economic and geopolitical identities as stable industry producers, a proliferation of companies has established a presence both on- and offshore. Most Caspian oil production currently comes from onshore fields, but offshore production is viewed as the primary target of future development. The goal now is to successfully expand and nurture these economic identities while best serving the world’s energy needs in a period of uncertainty.