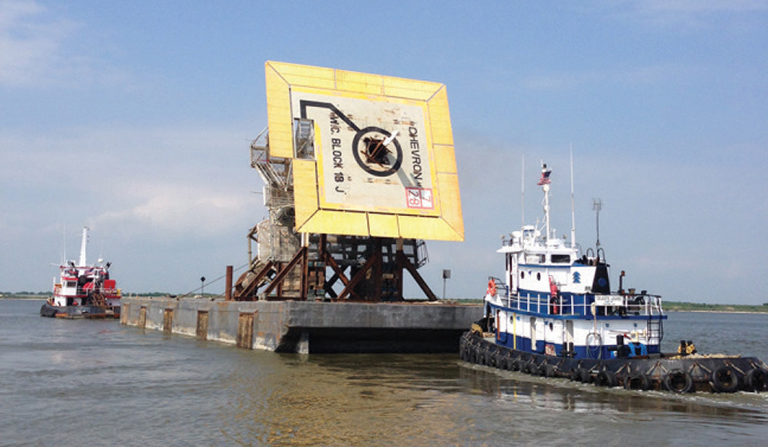 Photo courtesy of Versabar.
Many of the structures removed in the US Gulf of Mexico are relatively small, such as this caisson removed by Chevron that is being barged to shore.

A strong reason for removing old platforms from the Gulf of Mexico, rather than trying to squeeze more years of marginal production out of them, is hurricanes.

Based on the damage left after a run of four hurricanes from 2005 to 2008, the cost of pulling a mangled structure from the seafloor “is six to 10 times what it would cost if the structure had not been toppled over,” said Don Stelling, president of Chevron Environmental Management Co., whose operations include decommissioning fields.

Hurricanes Katrina, Rita, Gustav, and Ike left Chevron with 30 platforms and 18 caissons to be removed in short order, along with 325 associated wells that needed to be permanently plugged. Over the next 6 years, Chevron upped the pace of removals. First, it needed to clean up after the storms. Then, in 2010, federal regulators put in new rules requiring faster removal of “idle iron” in fields that no longer were producing.

What was the cradle of new offshore drilling methods has now become a proving ground for how to remove platforms, caissons, and pipelines left from the beginning of offshore exploration and development.

This study used ultrasonic logging to evaluate reference barrier cells constructed with known defects. The cell concept was developed with an emphasis on low cost and ease of use.