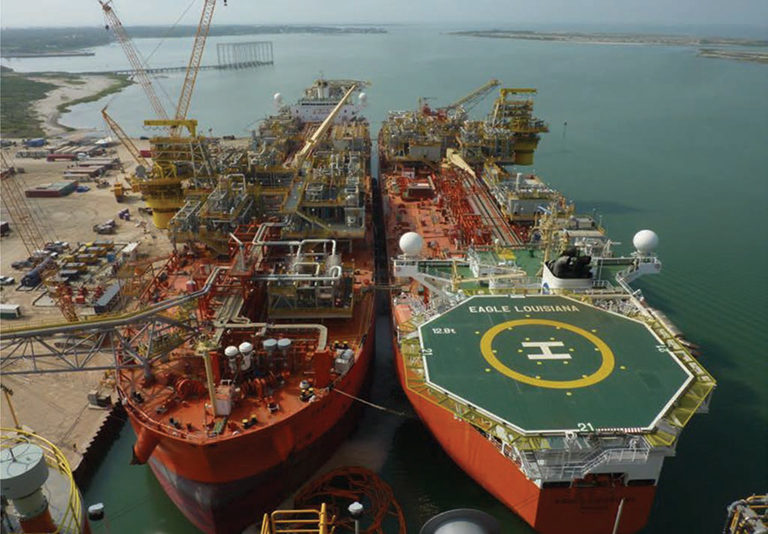 Photo courtesy of Marine Well Containment Company.
The Eagle Texas, left, and the Eagle Louisiana, are docked quayside near Ingleside, Texas, as they undergo outfitting and testing for emergency hydrocarbon capture and processing operations in the US Gulf of Mexico.

In response to the 2010 Deepwater Horizon incident that claimed the lives of 11 men and led to the worst oil spill in United States history, the offshore industry devised new technologies and methods that would allow for a quicker response if a similar event was to occur again in the US Gulf of Mexico. Among the newest response systems are the conversion of two Aframax lightering tankers into capture and containment systems capable of handling 100,000 BOPD of oil and 200 MMscf/D of gas. The company that designed the emergency-response vessels said they are the first production facilities to be built with the hope of never seeing first oil.

“They are basically (floating production, storage, and offloading units) that are now available in the Gulf of Mexico for this application,” said Charles Miller, chief technology officer of Marine Well Containment Company (MWCC) at the recent SPE Deepwater Drilling and Completions Conference in Galveston, Texas.

MWCC calls the convertible tankers modular capture vessels (MCVs) and recently completed a systems test of one of them, Eagle Texas, quayside near Ingleside, Texas. The second MCV, Eagle Louisiana, will undergo similar testing later this year. MWCC is a nonprofit company established in 2010 to respond to subsea blowouts in the US Gulf for its 10-member companies, which represent almost 70% of deepwater drilling in the basin.

Contracted from Houston-based American Eagle Tankers, the two MCVs will continue to operate in the Gulf as lightering vessels, transporting oil from tankers too large to dock at onshore offloading terminals. In the event of a well control incident, the tankers will have 5 days to sail to Kewitt Offshore Services’ construction yard near Ingleside and be outfitted with modular processing equipment. Both MCVs feature a quick disconnect buoy and dynamic positioning systems so they can operate without being moored to the ocean bottom, a time-consuming operation.

The processing equipment is being stored at the Kewitt yard in the exact configuration that it will be placed on the vessel’s decks to simplify and expedite the conversion process. And the entire modular system can be placed on board each MCV with nine crane lifts.

The production systems are connected to electronic monitoring equipment while in storage so the MWCC can remotely verify how the systems are working. “We can sit in our control room and see that the controllers are working, that they are hot, and we can see and operate the valves if we want to,” Miller said. “What this allows us to do is to know that all of our instrumentation, our safety systems, all that stuff, is working right until the day we need to take it apart and put it onto the Aframax tankers.”

The first phase of the testing of the Eagle Texas involved demonstrating that the modular systems could be started up without major safety and operational issues. Then the MWCC completed a second test to verify that the control system could react to varying flow rates. “Many of these wells are going to be potentially slugging, bringing up sand, various flow rates,” Miller said. The last phase of the testing was carried out to prove that the safety systems in place functioned as intended. That included the vessel’s flare, fire response, and gas handling systems.

The first flow tests were done in July using water and air to substitute as oil and water because of the cost and risks associated with using hydrocarbons and then cleaning and restoring the processing systems. Miller said the MWCC brought in more than 100 people from different Gulf of Mexico operating companies to oversee and take a hands-on role in the testing for 24 hours, “just as they would if it were a real incident.”

The startup test was not without its flaws, Miller said, explaining that the operating teams experienced many of the same issues that are common to starting up an offshore production facility for the first time. “We had some valves that were not working, we had controls not working, we had some leaks, and that is exactly what we wanted to find out,” he said. “But once we got over the hiccups with that, we were able to perform a flow test as planned.”

He added that the test was carried out without any safety incidents and that it proved that the processing system worked reliably and without bottleneck issues. “That makes us feel good that we have a system that works,” Miller said. A second test of the capture system was planned for late September.

One challenge for the MWCC now is to establish maintenance procedures and methods to make sure the equipment remains in a ready state. Regarding the piped systems, the MWCC is using a method known as “nitrogen blanketing,” which is the practice of filling up tanks and pipes with nitrogen, an inert and nonreactive gas, to maintain pressure and protect the equipment from corrosion.

The testing of the Eagle Texas also revealed a problem more related to personal tastes than specs, and should be among the easiest to address for the MWCC. “One of the things we learned is that a lightering tanker in the Gulf of Mexico has a very different catering practice than what our offshore operators are used to,” Miller said. “So we learned a lot of things, besides just hardware (issues).”