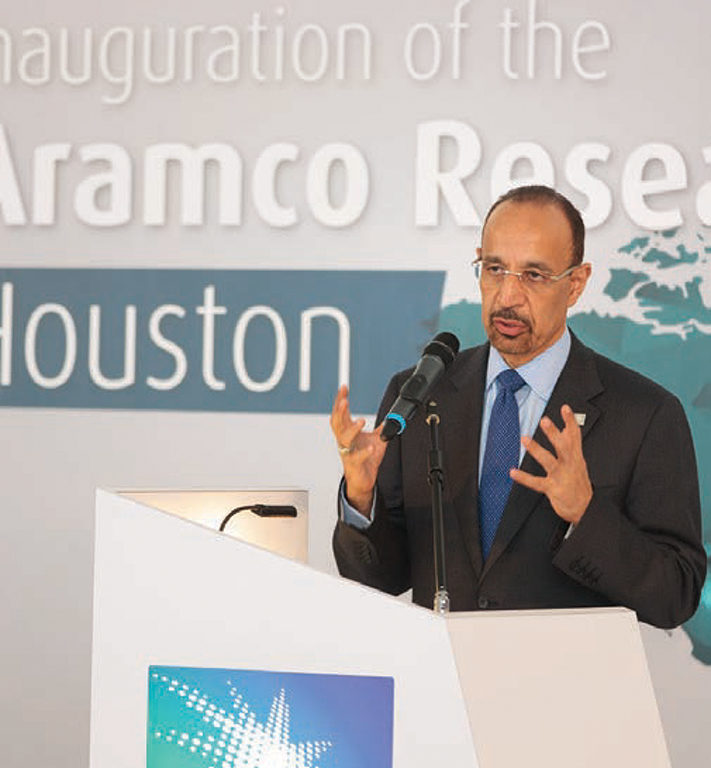 Khalid Al-Falih, president and chief executive officer of Saudi Aramco, outlined the company's research goals at the opening of its research center in Houston.

Saudi Aramco’s plan to create a global network of research centers is becoming a reality. It recently celebrated the opening of its Houston center that the company’s President and Chief Executive Officer Khalid Al-Falih described as “an upstream research center like no other.”

The opening of the Aramco Research Center in the heart of the energy technology center in Houston offered a look at how the national oil company is bringing in expertise from around the world to bear on maximizing output from Saudi Arabian reservoirs. The new research center is an extension of Saudi Aramco’s research hub in Dhahran, with complementary groups working on reservoir monitoring and imaging, as well as sensors and drilling. But there is something unique in the Houston center: unconventional reservoir research and development.

During the center’s official opening, Al-Falih acknowledged that Houston “is at the heart of the growth” of unconventional technology development. He singled out the pioneering role of George Mitchell, a Houstonian and fellow Texas A&M University graduate, who persisted through years of failures before proving that gas could be profitably produced from shale. “George Mitchell’s contributions are welcome to Saudi Aramco,” he said.

Unconventional production has led to a US production surge that has put a damper on oil prices. Al-Falih said those hard-to-produce formations will be required to meet global energy demand growth by 2050. In the near term, Saudi Arabia needs unconventional gas production to replace oil for power generation and desalination. And the country’s growing domestic oil demand could cut the supply of oil available for export.

There were core samples from unconventional reservoirs from Saudi Arabia waiting on shelves in the bright, white confines of the reservoir engineering laboratory where an array of new rock testing equipment was in place. High on the list of rock-testing goals is estimating the gas in place in Saudi Arabia’s unconventional reservoirs. A better understanding of how gas is stored in the tiny pores could have a large impact on estimates of ultimate production, as could more information on pathways for gas transport. While exploration drilling is just beginning, enhanced-recovery methods are an early priority.

While the rock lab is looking for insights at a microscopic level, the geoscience innovations group will be looking for them in Saudi Aramco’s enormous supply of data. Its “quantitative geoscience” work will apply methods used in the aerospace industry for modeling and in manufacturing to seek new reservoir insights, said Susan Agar, a senior geological consultant who is team lead for the geology group. Projects include using a 3D printer to create working models that share the shape and chemical makeup of the real thing. They want to “close the loop between normal modeling and physical experiments,” said Dawn Jobe, a geologist in the group.

In the nearby geophysics lab, staff are considering how buried arrays of seismic receivers can be used to improve image quality and repeatability. They are seeking to help production managers make better decisions with monthly, and sometimes daily, images. Buried receivers can provide better quality data from known locations so they can help determine how injection is affecting the reservoir, said Tim Keho, team lead for geophysics in the Houston lab.

The group is considering how deep sensors need to be buried to limit interference by surface features, such as sand, and how to use imaging to measure reservoir permeability by tracking how fast carbon dioxide moves from an injection well to a producer.

Aramco also hopes its research organization will create value by developing new intellectual property. The drilling fluids and cementing groups will be looking for ways to improve the quality of well construction by eliminating flaws in cement jobs, such as contamination by drilling fluid that can create weak spots or gas pockets that can become leak pathways.

If they find solutions, the four researchers on staff are experienced with commercializing new technology. All share service company backgrounds and have been involved in new technology development, with their names on about 250 US patents, said Carl Thaemitz, team lead for the drilling technology group.

The Houston facility is the second of three centers to open in the United States, following a computing research center in the Boston area near the Massachusetts Institute of Technology. A third developing engine technology in the Detroit area has yet to open. There will also be centers in Delft in the Netherlands, Aberdeen, Paris, and Beijing.