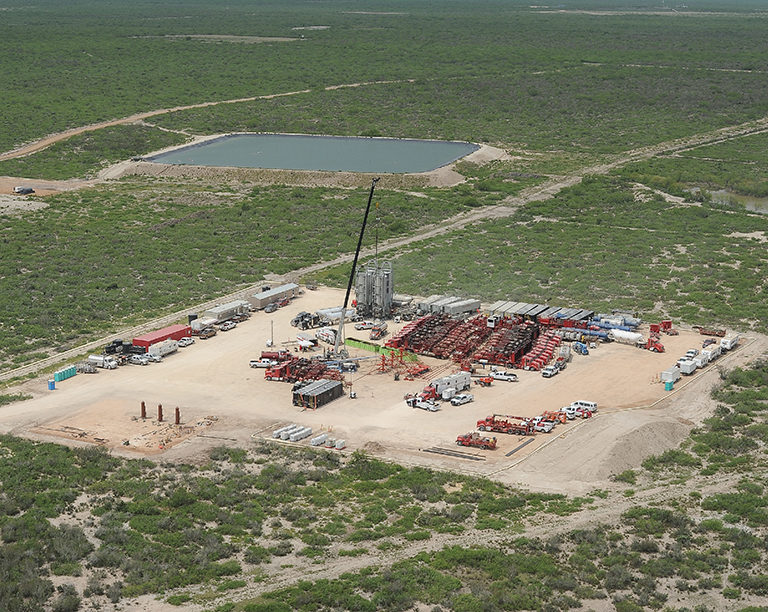 Photo courtesy of Halliburton.
A Halliburton crew performs a zipper-fracturing completion on three horizontal wells in the Eagle Ford shale of south Texas. The multiwell completion technique has been rapidly adopted by the unconventional industry as operators realize time savings and production benefits from stimulating more reservoir rock.

A horizontal well completion method known as zipper fracturing has been rapidly adopted over the last couple of years by companies in the Eagle Ford shale of south Texas. Instead of drilling and hydraulically fracturing one well at a time, the zipper method involves drilling multiple wells from a pad site and then hydraulically fracturing a stage in one well, while getting ready for the next, as wireline and perforation operations take place in another. The multiwell completion method earns its name from the zipper-like configuration of the fracture stages from wells drilled with relatively tight spacing.

This shaves days off the time it takes to complete a multiwell pad. Many companies in south Texas are now using the completion method on almost every new pad site they drill into, saving tens of millions of dollars per year while accelerating the development of their well inventories.

But the big prize may be that zipper fractures are increasing initial production and estimated ultimate recovery rates when designed so that the fractures stimulate the most reservoir volume possible. Tulsa-based WPX Energy, an independent operator of 160,000 acres in the San Juan Basin of New Mexico, told investors this summer that when the company switched to zipper fracturing, it averaged 420 B/D of oil production compared with 388 B/D from single-well completions. While not entirely sure if zipper fracturing is the direct cause of improved production, WPX said it expects that is the case.