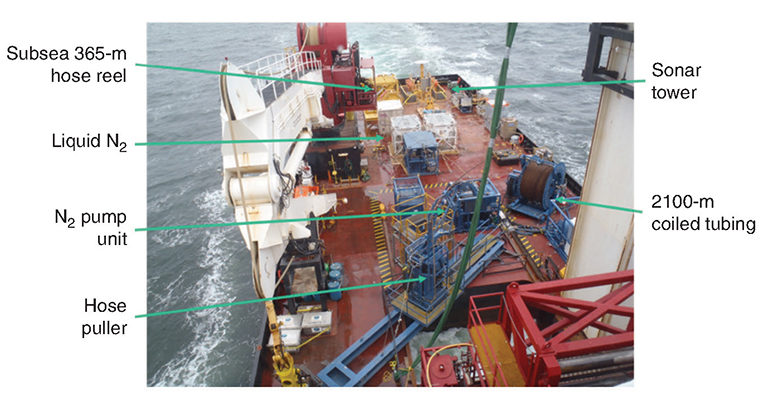 The authors have developed an active acoustic automatic leak-detection sonar (ALDS) designed to detect hydrocarbon leaks (mono- and multiphase oil and gas) at significant ranges, allowing coverage of wide areas from a single sensor. The system’s single subsea sensor offers 360° continuous coverage, providing automatic, robust detection and localization of any leak, followed by an alert within tens of seconds of a leak developing. This paper provides a case study of an experimental program in which the system underwent trials in deep water (2000 m) at the Thunderhorse field in the US Gulf of Mexico (GOM).

Most methods for detecting small leaks—for example, passive acoustic detectors that “listen” for the sound of a leak—have very limited range, which makes them suitable for applications such as pipeline surveys but not for wider field coverage. ALDS was developed to address the requirements for a system that can provide leak detection, including the ability to localize the leak, from a single point for a whole drill center. The typical requirements for such a system include

The system is an active sonar that transmits ultrasonic pulses or “pings” at 70 kHz into the water and listens for reflections from objects within its field of view. This system is a phased-array processor capable of looking at returns from 360° of azimuth coverage simultaneously.

Hydrocarbons have different acoustic properties from the surrounding seawater, notably a different acoustic impedance, which means that a sound wave encountering the boundary between seawater and hydrocarbon will be partially reflected and therefore “seen” by the sonar head. To determine if a reflection is from leaking hydrocarbons, the sonar map for each ping is compared with a reference map to see if the scene has changed. Data processing is then used to assess any changes from the reference map to see if they match the characteristics of a hydrocarbon leak or those of other objects such as remotely operated vehicles (ROVs), which might be operating within the ALDS field of view.

Theoretical modeling has been used to estimate the acoustic target strength of oil and gas plumes at various water depths and for various leak rates and plume geometries.

ALDS System. ALDS comprises topside and subsea equipment components. The topside equipment includes a rack-mountable command unit known as the Command Workstation (CWS) that displays an easy-to-interpret infrastructure schematic with leak-detection-symbology overlay, a rack-mounted sonar interface unit that performs all signal and data processing, and a converter unit for fiber communication and power interfacing through the subsea umbilical. The umbilical may be several kilometers long (8 km for the experiments detailed in the complete paper) and terminates at the deepwater tie-in point, which connects through the subsea converter unit. The sonar head is deployed on a 5-m-high tower on a steel sled designed to give the sensor a good vantage point over the local subsea infrastructure.

The sled was deployed to the seafloor at a remote drill center by use of a dynamically positioned support vessel. The ROV then made the power and communications connections. The sonar was powered up, and the ethernet communications over optical fiber were tested over an 8-km-long link back to the production platform.

Oil Target. Obvious environmental constraints prohibiting the release of an actual oil plume during this experiment meant that simulating the oil leak was quite a design challenge. A satisfactory solution involved the use of 65-m-long neoprene strands in 10 bundles of 10 strands, tie wrapped approximately every 1.1 m and spaced around the inside circumference with nylon hoops approximately 15 cm in diameter, attached every meter to two nylon cords as strain members. The idea is that the neoprene is not under tension and thus can spread out between each hoop, simulating the oil in an actual plume. Calculations show this configuration is equivalent to an oil-leak rate of approximately 100 B/D, depending upon the typical ascent rates of oil plumes. Neoprene will therefore behave as an oil-like acoustic target but with a water relative density of 1.3, sufficiently high for it to stand upright in the water column when deployed from the dynamic-positioning (DP)-vessel reel. The general shape that the strands take in the water column is also oil-plume-like in appearance.

Gas Target. The design of the gas-leak experiment was even more challenging because it required very substantial seabed infrastructure deployment and recovery to allow an extended trial period. Fig. 1 (above) shows the complete deepwater-gas-test experimental equipment onboard the DP vessel during transit to the trials area. The image shows the 2100-m coiled tubing unit used to supply high-pressure nitrogen (N2) gas from the DP vessel to the seabed-deployed (and ROV-controlled) hydraulic distribution system (HDS) from which the second ROV deploys a reelable gas-leak target to the surveyed test locations.

The leak target was deployed by ROV up to 350 m from the HDS to the required survey positions in the operational field infrastructure. The calibrated gas leaks at 2000-m water depth were monitored by the ROV for 1 L/min (9 B/D at depth) and 5 L/min (45 B/D at depth). The differential pressure at depth is approximately 1 bar.

The deepwater tests took place in an operational production field in the GOM during early 2012 and early 2013 for the oil-leak and gas-leak experiments, respectively. A significant part of the planning process was to ensure the completion of comprehensive technical risk-assurance assessments that dealt with the unique challenges of conducting experiments of this complexity in such hostile environments. Among the many challenges were the following:

During the oil-leak experiment, the oil target was deployed from a DP vessel to various locations. Typically, several minutes of data were recorded at each target position. For the gas-leak experiment, an ROV deployed the gas target (approximately a 30-cm cube) to various surveyed positions within the producing field.

The system has been proved against monophase simulated oil leaks (so-called “dead” oil) in an operational deepwater (approximately 2000-m) production field in the GOM. Leak rates of approximately 100 B/D were localized at sensor leak ranges out to 500 m in uncluttered seabed and to 250 m among the field seabed infrastructure of pipelines, manifolds, and risers. The ultimate detection range recorded was limited by the linear extent of the synthetic oil-leak target but is expected to exceed 1000 m for higher leak rates.

Against monophase gas leaks in the same deepwater production facility, the system detected small, 1-L/min at depth (9-B/D) gas leaks reliably when in close proximity to a variety of seafloor equipment and at sensor leak ranges of 750 m on clear vectors.

Assuming typical gas/oil ratios of approximately 1000 m3/m3, this gas-leak rate of 1 L/min at depth would be associated with less than 2 B/D of oil in a typical mixed-phase leak of so-called “live” oil. This deepwater experiment therefore shows ALDS capable of detecting live-oil leaks of less than 2 B/D at sensor leak ranges of 750 m. In addition, analysis of leak-rate sensitivity showed ALDS capable of detecting just 0.2 B/D of live oil at sensor leak ranges of up to 500 m.

The GOM trials represent a typical application of ALDS for a new field in the production phase; however, ALDS also has potential for use during other stages of field development. During the exploration phase, the system can be used before drilling to establish a reference map for the field and potentially to detect any variable natural seeps by measuring over a number of tidal cycles. This can allow an operator to document natural seepage in a field and to inform a regulator before commencing drilling. Here, ALDS can be linked to the platform control room and, if possible, back to shore to allow real-time reporting of leak alarms, giving the operator a high confidence of no leakage and early warning should an incident occur.In production, the system is of significant interest for monitoring injection wells during enhanced-oil-recovery activities. Other potential applications include carbon dioxide detection and a standalone option for fields with limited infrastructure; these developments are detailed in the complete paper.

This article, written by JPT Technology Editor Chris Carpenter, contains highlights of paper OTC 26270, “A Case Study on the Implementation of an Acoustic Automatic Leak-Detection Sonar (ALDS) in the Gulf of Mexico and Its Application to Current and Future Brazilian Fields,” by G. Brown, S. Fasham, P. Tomlinson, and R. Crook, Sonardyne, prepared for the 2015 Offshore Technology Conference Brasil, Rio de Janeiro, 27–29 October. The paper has not been peer reviewed. Copyright 2015 Offshore Technology Conference. Reproduced by permission.