Hydrocarbon-Mobility Steering for Optimum Placement of a Power Water Injector 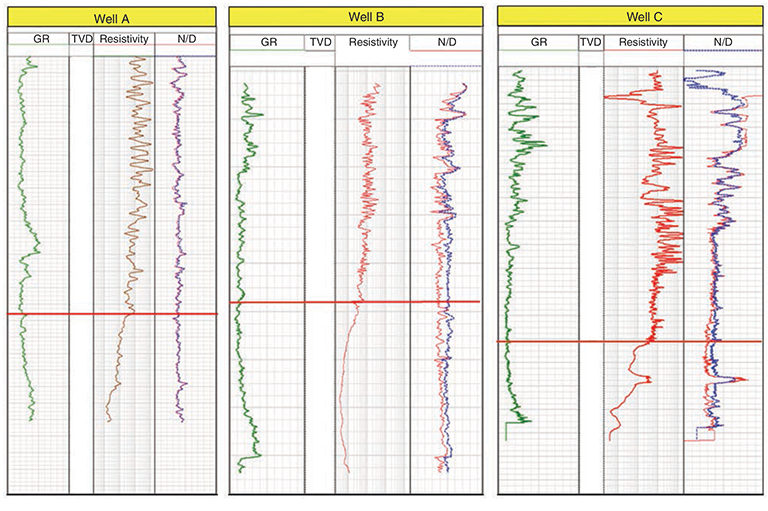 Fig. 1—Correlation panel of three nearby offset wells. All three wells display a gradual reduction in resistivity as Sw increases with true vertical depth (TVD). The heavy-oil layer is judged to be at the start of the resistivity reduction. This is seen to differ in each well. (GR = gamma ray; N/D = neutron porosity and density.)

Tar mats are encountered in many Middle East carbonate reservoirs. In cases in which tar acts as a flow barrier between water and light oil, water injectors work most efficiently when placed horizontally immediately above the tar mat to maintain pressure support during production. As this strategy is pursued, a real-time tar-detection method is needed while drilling. The low mobility caused by tar can be detected with a formation-pressure-while-drilling (FPWD) tester, while a nuclear-magnetic-resonance (NMR) tool provides oil-viscosity estimation.

The Ratawi limestone reservoir was discovered in 1963 in the offshore Neutral-Zone Concession area between Saudi Arabia and Kuwait. The production of light sour crude oil commenced in 1966. After an increase in gas/oil ratio and a sharp drop in reservoir pressure occurred, dump-water injection was started in 1975. Until recently, peripheral dump-water injection was used.

Geologically, the reservoir is divided into three units, Units A, B, and C from top to base, respectively. Of these, Unit C is the main producing unit. The top of Unit C is considered as a possible sequence boundary/unconformity. Units A and B represent initial flooding over Unit C. The two units are composed of alternating porous limestone and less-porous or tight limestone, and show overall transgressive-system tract sequence.

This article, written by JPT Technology Editor Chris Carpenter, contains highlights of paper SPE 164282, “Hydrocarbon-Mobility Steering for Optimum Placement of a Power Water Injector Above Tar Mats—A Case Study From a Light-Oil Carbonate Reservoir in the Middle East,” by Craig Saint and Thomas Glowig, Baker Hughes, and Ashis S.S. Swain, Nasser A. Al-Khaldi, Mohd. H. Al-Otaibi, Abdul Aziz Al Ghareeb, and Ahmad Bader Al Bader, Khafji Joint Operations, prepared for the 2013 SPE Middle East Oil and Gas Show and Exhibition, Manama, Bahrain, 10–13 March. The paper has not been peer reviewed.
...
This article is reserved for SPE members and JPT subscribers.
If you would like to continue reading,
please Sign In, JOIN SPE or Subscribe to JPT

Hydrocarbon-Mobility Steering for Optimum Placement of a Power Water Injector